Share All sharing options for: View From The Town End - Nottingham Forest

Before each game we’ll try to get the view from a fan from the opposition and this Saturday, Nottingham Forest host the Royals.

Alan Fisher from Forest Forum.co.uk was good enough to help us out with his thoughts ahead of Saturday's game.

How would you describe your season so far?
A slow start, an exciting optimism-fuelled middle and what looks like turning into a limp finish.  Personally I didn't quite go as far as targeting automatic promotion like a few Forest fans but I did expect to finish in the play-offs.  While that's by no means impossible, we are struggling for form big time at the moment - not helped by a crippling list of injuries, and the salt-in-the-wound suspension of Chris Cohen after Mark Halsey's ridiculous sending off of him against Leeds at the weekend.
Where do you think you'll finish?
I'm starting to think that 7th-9th might be our finishing position, we look like the team that drops out the top six having spent a while in there, I struggle to see us reclaiming our spot against the form of the likes of Reading and Burnley, if not others in the chasing pack.
Billy Davies is one of the more outspoken managers in this league, what do Forest fans think of him?
I think he's pretty misrepresented by the media - he's been a lot calmer this season than last, and seems generally quite content with life, but he certainly seems to engender critical reactions from other supporters.  I can't remember thinking negatively about him before he joined Forest - even when he was at Derby - although at the time of his appointment I was dead against him, mainly down to my perception of the style of football his teams played.  I was wrong.
With results going awry there are more questions being asked about him, but I'd say most Forest fans back him. Instead many fans are choosing to vent their frustrations toward the board (or our fabled 'Transfer Acquisitions Panel) for struggling to strengthen - our squad is good, but too small.
Which Forest players should Royals fans watch out for?
Well our strikers haven't given many sides much to worry about over recent weeks - that said, the likes of Earnshaw and Boyd do know where the goal is, so maybe they might turn around indifferent form of late.  Aside from that there's an outside chance that we might get something unexpectedly brilliant from midfield - Lewis McGugan has already had a goal-of-the-season competition himself this season, but he's not netted for a while, whilst Raddy Majewski and Garath McCleary can both pull rabbits out of the hat on occasions.  Chances are if the game goes to form you'll be admiring the fine shot-stopping capabilities of Lee Camp (or Lee O'Camp since he's now a Northern Ireland international!).
Former Royals winger/striker Nathan Tyson has been with you a while now, what do fans make of him?
Well since he celebrated beating Derby with a Forest emblazoned corner flag he's gone down as somewhat of a folk hero.  Devastating pace, appalling first touch and massively inconsistent finisher - I love and admire his dedication, workrate and professionalism, but alas - he's just not quite good enough, which is sad.  He's out of contract at the end of the season and I don't expect him to be here next season - I'll be sad to see him go for sentimental reasons, but for football reasons I do think we could do better. 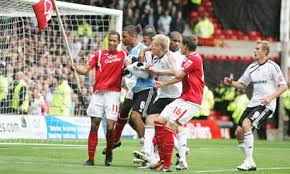 Nathan Tyson attained cult status thanks to this celebration against Derby

Who are Forest fans worried about from Reading?
Anything going forward to be honest, you're on a great run and have surged past us into the play-off places already.  I can't help but look at the average age of your defence and wonder whether we might be able to capitalise on it with a bit of pace, but given our attack couldn't penetrate a wet paper bag at the moment that would seem to be rather a forlorn hope.  Our defence is pretty solid, but with Cohen suspended and McKenna and Moussi injury doubts we are painfully lacking in a midfielder capable of doing the 'tidying up' role - I think you'll be able to over-run us in midfield and consequently over-stretch our defence.
Any tips for travelling Royals fans?
Nottingham's a great city - if you're day-tripping then you'll find Hooters near the station, typically away fans are directed to drink in the bar attached to Notts County's ground, which has apparently been refurbished.  It certainly needed it!  Those of you staying for the weekend then there's plenty to tickle your fancy in the city centre, whether it be historic places like Ye Olde Trip to Jerusalem and The Bell, or whether you want to go more upmarket in the trendy Lace Market area.  The best thing about Nottingham is that it's compact, so you can walk from one side to the other.
Score Prediction?

I can't see much past a Reading win, you'll be pleased to read no doubt.  I can see goals in your side, I struggle to see where we might snag one - if we can get one-off Boyd's arse then maybe we could sneak a 1-1 draw assuming Camp has a decent game.  But I'm going to go 2-0 to the Royals and further grumpiness from Forest fans!

Thanks to Alan for helping out and you can follow him on Twitter @winnits or at http://www.ltlf.co.uk