Share All sharing options for: April 9 - Nottingham Forest (A)

So who are we playing?: Nottingham Forest at the City Ground. 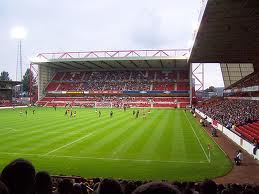 Where are Forest in the Championship? 7th

Recent Form? If you looked just at their last ten games or so, you'd say Forest were a team in 17th rather than 7th. After being in the playoff zone and chasing down second around the turn of the year, Billy Davies' side have won just one of their last ten. However don't underestimate them at home, Forest have lost just once there this season.

Last time we played them? A 1-1 draw at the Madejski Stadium back in August. Alex Pearce gave the Royals a first half lead only for an Adam Federici mistake to give Robert Earnshaw a simple equaliser.

Any former Royals?: Academy graduate Nathan Tyson should at least make the squad. Forest did have former Reading loanee Ryan Bertrand with them earlier in the season, but he returned to parent club Chelsea.

Any advice for travelling Royals?

Check this out or check out the friendly advice from Forest fan Alan Fisher in our recent View from the Town End.

Saturday is perhaps our biggest game of the season, with a win putting us up to six points clear of the chasing pack and a defeat throwing us right back into the mix, level on points with Forest.

The home side have been in a massive funk of late, just one win from ten games have turned them from automatic promotion candidates into a team who are now only 6/4 to make the playoffs full stop. The Royals on the other hand seem unstoppable of late, the win over Preston on Tuesday being our fifth straight victory. But when there's so much on the line, the formbook goes right out of the window and anything can happen.

Historically we've not got the best record at the City Ground. Last year we fell to a 2-1 defeat and haven't won at the ground since a Scott Murray goal secured a 1-0 win in January 2004. We've also suffered relegation at the stadium, when a late Chris Bart-Williams goal sent Tommy Burns side into Division 2, and confirmed Forest as Champions.

Back to the present and Forest have players that have proved themselves in the Championship such as Robbie Earnshaw, as well as the likes of Kris Boyd and Lewis McGugan who can hurt you.

For the Royals, manager Brian McDermott has nearly a full squad to choose from judging by the personal who turned out for the reserves in their 5-0 win over Northampton in midweek. The most likely change would be seeing Leigertwood come in for Tabb/Karacan with Hunt or Manset up front, and if fit, Mills back for Zurab or Ingimarsson, but Brian may be unwilling to tinker given recent success. There's also a question of whether Adam Federici is restored to the starting lineup, a debate which you can read all about here.

I can't say I've got a good feeling about this one, I just feel that it's one game too many for us and we could be in for a big defeat, so pessimistically I'm going for a 3-1 home win.

Through The Seasons Before Us (Forest Blog)