As Alex McCarthy collected the Official Reading FC Player of the Month award, you had to feel it was well deserved. In his first full month as first choice keeper for Reading, he's quickly grown into the role, playing superbly throughout his time between the posts. McCarthy has won over the Royals fans with increasingly confident displays and some moments of brilliance, such as his infamous save at Goodison as well as a penalty save at Selhurst Park against Crystal Palace.

McCarthy got his chance in the team during the 1-1 draw with Watford back in February after Adam Federici was forced off injured following a collision, and the young keeper hasn't been out of the team since. However, Federici now seems in a position to make a first team return, after safely coming through 90 minutes for the reserves in a 5-0 friendly win against Northampton, but the question is will he return to the starting lineup, or have to settle for a spot on the bench? 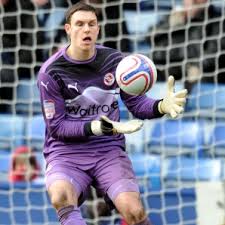 The situation is similar to one facing the club in 2009 when Federici himself came into the side following injury to Marcus Hahnemann in a game against Blackpool. Deputising for Hahnemann, Federici enjoyed a successful spell in between the posts, even netting a memorable goal against Cardiff. However, then manager Steve Coppell eventually restored Hahnemann into the side after his injury, saying that towards the end of the season, he wanted 'more experience' in goal. McDermott now faces a similar decision of whether or not to keep a young in form McCarthy in goal, or to restore the more experienced Federici as first choice.

It's a difficult decision, and with just seven games to go plus perhaps the play-offs, a very important one. On paper there's every reason to keep faith with McCarthy, after all the Royals are still unbeaten in the league when he's played. The young keeper has become increasingly confident as he's spent more time on the pitch, has started to command his area well and is making some good saves. The England U21 'keeper is also excelling in varying his distribution, an area in which he seems to have an advantage on over Federici. McCarthy prefers quick throws  to start counter-attacks after catching crosses, often rolling it out to defenders.  He's less likely to play a long ball for Shane Long to try to win a header; which in turn means  the ball doesn't end up straight with the opposition quite as often. This change in distribution allows the team to play football from the back and we seem to have improved our results with this style.

However, McCarthy isn't perfect, and his inexperience has shown at times this season. Occasionally he has come for the ball when he'd have been better off staying in his goal. Examples of the former Yeovil loanee's decision making can be seen in the goal he conceded to Connor Wickham's at Ipswich, when the stopper conceded a penalty in the game against Palace and his having a couple of dodgy moments against Portsmouth. Although these mistakes didn't prove costly, (Wickham's goal was a mere consolation and McCarthy made up for the Palace mistake by saving the penalty), you wonder how long it will be until a moment of inexperience will catch young Alex out and prove costly to the team.

Experience may be the big reason McDermott's tempted to restore Federici, but one thing that may count against the Aussie is that he isn't as experienced as Hahnemann was back in 2009. This is only Federici's second full season as a number one and he isn't even the most experienced keeper at the club in terms of league starts, as Ben Hamer has actually made more appearances during his career, albeit all of those have come at a lower level. Adam has also shown he can be a prone to the odd mistake which have cost Reading valuable points, such as at home to Forest and away at Cardiff. However you could argue that he makes up for those mistakes but winning points for the Royals in other games. Derby away this season springs to mind, as well as top saves late in games against Leicester, Coventry and Leeds. For me, McDermott must choose the keeper he feels he can rely on to not cost the team points, as well as have the ability to make low percentage saves to help win points, traits to me, Federici has shown many times in his career.

When the season ends, no matter what division the Royals are playing in next season the goalkeeping debate is likely to rage on. Reading are blessed with having incredible strength in-depth in the 'keeper department and credit must go to goalkeeping coach Sal Bibbo for bringing these players through.

However unlike other positions, only one goalkeeper can play and it is often hard to replace a stable first-choice number one. Injuries to goalkeepers are relatively rare so chances for the backups are few and far between, and even if you do get a run in the team thanks to injury, Federici himself can attest to the fact that it can be difficult to keep your place following your chance. So while having four or five top keepers at the club may seem great, it can be difficult to keep them all happy.

To ease this situation, Reading have sent their backups on regular loans to keep them happy with pitch time. Hamer has gone on loan to Brentford and Exeter, Andersen to Bristol Rovers, McCarthy went to Yeovil last season and Brentford at the start of campaign and young Simon Locke to Dagenham & Redbridge and Basingstoke. While this loan policy suits both club and player fine in the short-term,  it might not be long before the likes of Hamer and Andersen  start to get frustrated with being unable to break into the Reading first team. They may become unwilling to go on loan to different clubs in different places around the country,  wanting instead a  permanent club. Andersen has already stated he may leave if he doesn't become first choice at Reading soon and many clubs are rumoured to be interested in taking Hamer.

So while for now it's a nice problem to have, you feel it may need to be sorted out sooner rather than later. Federici, McCarthy, Andersen and Hamer all signed new deals this season but it probably won't be too long before they may be looking to find first-team football elsewhere. They're not the only highly-rated keepers at the club either. Young Simon Locke was doing superbly at Basingstoke until getting injured earlier this season, Under-18 Swiss stopper Dean Santangelo is also getting rave reviews in the Academy, while 16-year-old England youth international Jon Henley is impressing on loan at Zamaretto League side Hungerford Town.

So how will it all pan out? We'll have to wait and see.

It may not be all in the club's control as Premier League vultures look like swooping for Federici and with McCarthy's England Under-21 and FA Cup exposure it may not be too long before he might attract interest from above. All of our keepers look like they could have another good 15-20 years of football ahead of them and all have the potential to improve significantly.

For me, It's going to be very interesting to see to whom that Number One jersey belongs too in the coming years. Please feel free to share your thoughts bellow.