Pub Chat - If Shane Long is sold, where should the money be spent?

Share All sharing options for: Pub Chat - If Shane Long is sold, where should the money be spent?

This week's Reading Football Fancast should be up on Monday night!

We'll be looking back at the Preston and Nottingham Forest games and looking forward to Scunthorpe and beyond.

Every week we do Pub Chat and this week it's on Reading's top goalscorer Shane Long. Please leave your comments below and we'll try to read them out on the show!

Our Pub Chat Question this week is....

Hypothetically speaking, If Shane Long were to be sold for around £4 million at the end of the season. Where would you like to see the money spent?

Personally speaking, if we are promoted this year I don't think he will be sold. If he is, then it would be the biggest scandal since the MP's expenses debacle!

What i would like to see Reading do is something they have failed to do after any of the previous big name player departures and that is to reinvest significantly in the squad! You couldn't just spend the whole of the £4 million on player purchases, as wages have to be taken into account, but by the same token you could use that money to pay bigger wages.

Here's what I would do. First, I'd go to Chelsea and sign Ryan Bertrand. You could probably snap the left back up for £1 Million plus a 20% selling on fee. If Chelsea don't want to sell him then at the very least get the guy on loan for a year!

Next, give Zurab Khizanishivili £20,000 a week on a two-year contract. That's just under £2 million over the course of the contract, which OK, is a lot of money, but it's a bargain for a player of his quality.

Then I'd focus on getting probably the best midfield ball winner I've seen at Reading for many a year, Mikele Leigertwood. Wages wise, I'm guessing that the QPR man will cost around £15,000 a week, which over two years is £1.44 million' which is about the same as Shane Long is on right now way so no loss there!!

If we get promoted to the Premier League this year, then this should happen any way! No excess Mr Madejski!!!!!!!!

So what about Long's replacement?! I hear you cry! Well we already have some good players at the club in Mathieu Manset, who will improve and Noel Hunt, who despite his injuries this season and last, is still a proven goal scorer at this level.

But if we're looking outside the club then Huddersfield's Jordan Rhodes is a good shout! The striker is young and hungry and would cost us roughly £2 million or so!

I know what you're thinking..... Westie, you've spent about £6 million there over two years!! .....Ok you've got me! But do you remember the days when Reading would pay £750,000 for players like Darren Caskey and Martin Butler?  and that was when we were a little team at Elm Park, or in the lower divisions.

Good strikers are expensive, but to be successful it helps to have a strong core and a good goalscorer and if that's the case, why sell in the first place?  To me the only reason to sell Long is if by doing so you improve your whole team, and that means investing in those 2-4 players! 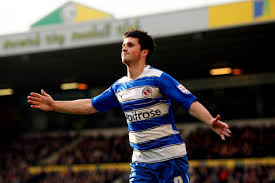 Why get rid of a good thing?

We'd  love your comments on the above for this weeks show, so please leave them below and we'll read out as many as we can, either this week or in next week's show