Nigel 'Strap' Meek is known to many Royals fans as the club's unofficial statistician, keeping a detailed database of a variety of Reading records and has helped write and provide stats for various web forums and publications in the past including the clubs own official website.

We're delighted to say that Strap is going to be writing a few pieces here at the Tilehurst End in the coming months, with his first piece being a look-back on Reading's time in the second tier.

I had to check recently that RFC is currently in its 18th season in the League’s 2nd tier. When I started supporting the (then) "Biscuitmen" in 1970, we were the archetypal lower league team. Of the 44 seasons we had spent in the Football League up to that point, 39, (or 89%), had been spent in either Div3(south) or the old Div 3. (Of course, whether Div3(south) should be considered 3rd tier or 4th is open to debate. I suppose it could be argued that a finishing position of 12th in Div3(s) or better would have put the team in the 3rd tier with the top 12 from Div3(north), whilst a finishing position of 13th or worse would have meant a spell as a 4th tier team. For the time being, let’s ignore that pedantry).

Since 1971, as can be seen in Table 1 below, our movements up and down the leagues have been far more energetic. 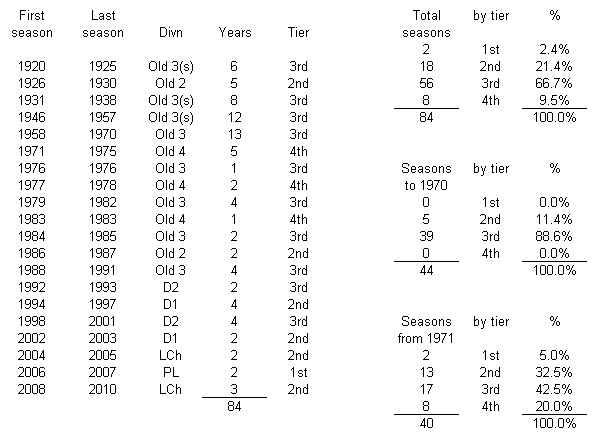 The end of season records for our 18 seasons in the 2nd tier show a remarkable range of finishing positions. Most supporters today will remember the stunning 2005-06 1st place finish, which was almost a mirror image of Terry the Taxi’s diabolical attempt at football management when we finished bottom of the pile in 1997-98. For those with a less than encyclopaedic memory of all things RFC, The full record of 2nd tier finishes is provided in Table 2.

With 6 games to go this season, we are currently 5th in the table with a PPG ration of 1.65. In the past, we finished 2nd with a PPG ratio of 1.717. Now I’m probably tempting fate here, however, in order to raise our PPG from its current 1.65 to 1.717, we need to win 13 points from our final 6 games. With the remaining schedule of games being :

Scunthorpe Utd (A) – currently 22nd in the table,

you would need to be a real “STG” to seriously suggest that 4 wins and a draw from these last 6 games was beyond the realms of possibility. I suppose the next logical question to ask is whether 79 points would be enough this year to secure automatic promotion?

Looking at the number of points the runner-up achieved in the second tier since the formation of the PL back in 1992-93, it seems that 79 points is actually the lowest ever points total for the team finishing second. We did it in 1994-95, (when of course only the champions went up automatically), Derby Co did it a year later, and Stoke City managed it in 2007-08. So even if we do manage to hit 1.717 PPG this year, don’t bet your mortgage on us finishing in 2nd place. 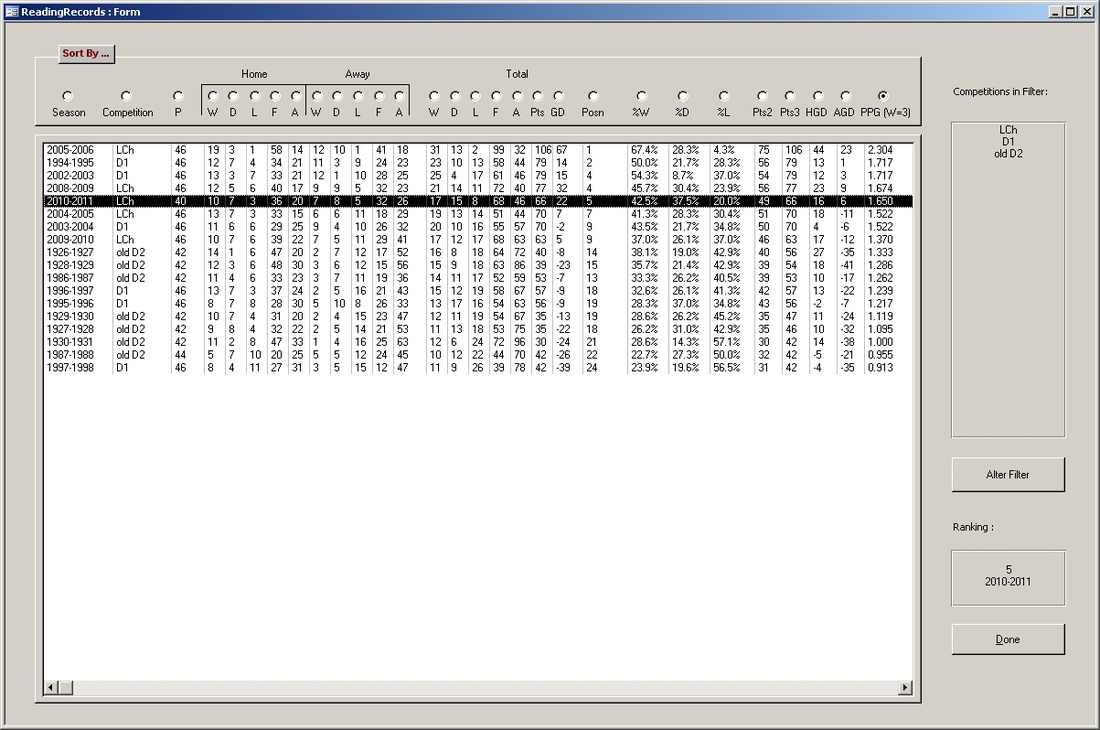 So, 18 seasons in the second tier. Which Reading player has started the most 2nd tier games? Clearly as most of our 2nd tier experience has come in the recent past, it follows that players familiar to today’s fans should be somewhere near the top of the list.

A total of 238 different players have made one start or more for RFC in the 2nd tier of League football. A further 20 have only made substitute appearances, and 14 have only ever warmed the bench.

The top 40 appearance holders are shown in Table 3. Marcus Hahnemann tops the list as the only player to break 200 starts, (201), and he is followed by James Harper (180+18 subs). Of current players, only Ivar Ingimarsson manages to get into the top 10, being 3rd (176+3). Depending on fitness and form, he might just equal Harper’s starting total by the end of this season.

The question is, will Shane Long get the 7 goals he needs in the next 6 games to overtake Dave Kitson’s 2nd tier record? Even though Shane has been on a hot streak recently, I doubt he will. As he’s likely to be playing PL football next season, (either with or without RFC), I reckon Dave Kitson’s record is safe for the time being.

Of course, the bare numbers don’t really give the full picture of goalscoring prowess. So tables 5, 6 and 7 consider goals scored per start, per substitute appearance, (i.e. our super-subs), and finally total goals per starts+subs. 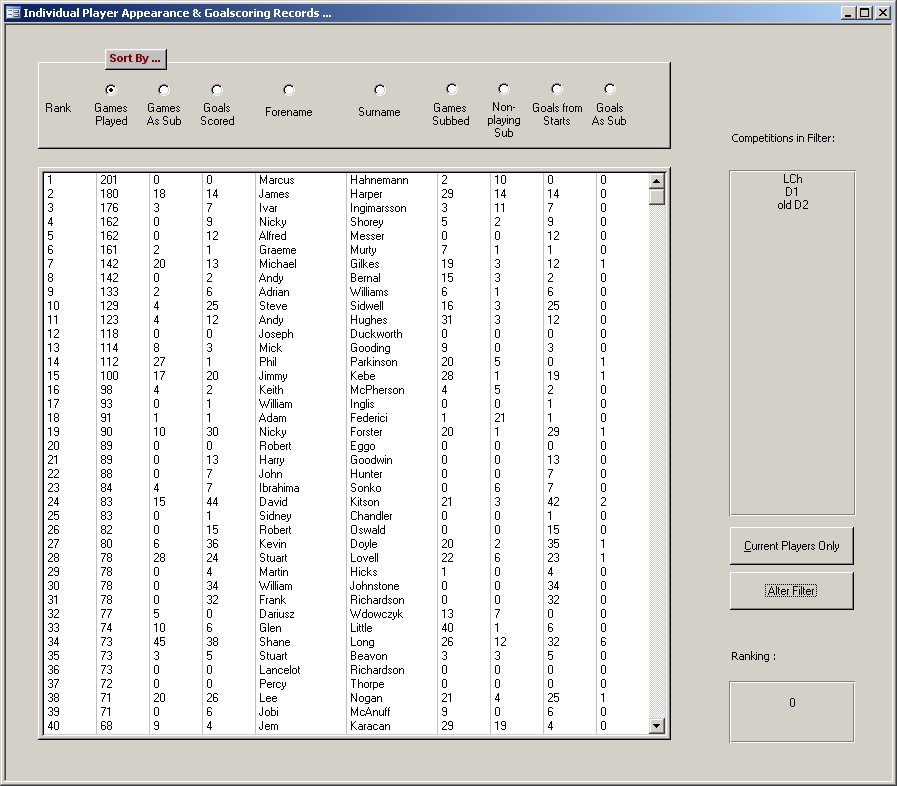 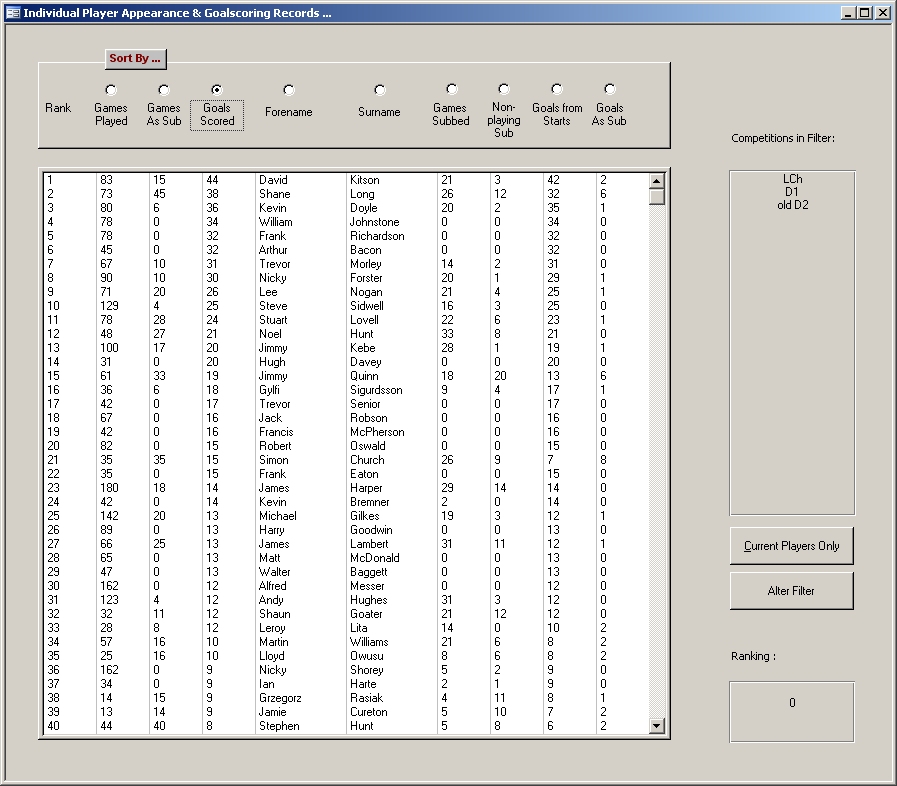 As you can imagine, the “Goals Per Game” stats throw up some oddities. For instance, the only reason Jack Palethorpe, Darius Henderson and John Halls have strike rates of 1.0, (a goal every game), is because they only started a total of 4 2nd tier games between them. So ignoring them, (and other notable anomalies such as Paul Brayson and Neville Roach), by only considering players who made at least 10 starts, the top 10 goalscorers in the 2nd tier are arguably:

Not too many arguments from me, although I was a little surprised at Grzegorz Rasiak’s impressive strike rate from the number of starts he made.

Moving onto our “super-subs” list, Shane Long is conspicuous by his absence. His record of scoring 6 goals in 45 substitute appearances drops him down to 18th in this list, with a strike rate of 0.17 when used as a sub. Funnily enough this is a similar ratio to Dave Kitson’s.

Clearly Brian McDermott has his striker selection spot on for the 2nd tier – starting with Long and Hunt, with Church and Manset coming off the bench! For those interested, Simon Church is our top 2nd tier substitute goalscorer on 8, ahead of Jimmy Quinn and Shane Long with 6 each.

Honourable mentions to Dylan Kerr and Scott Taylor for substitute strike rates far in excess of their rates when picked to start. 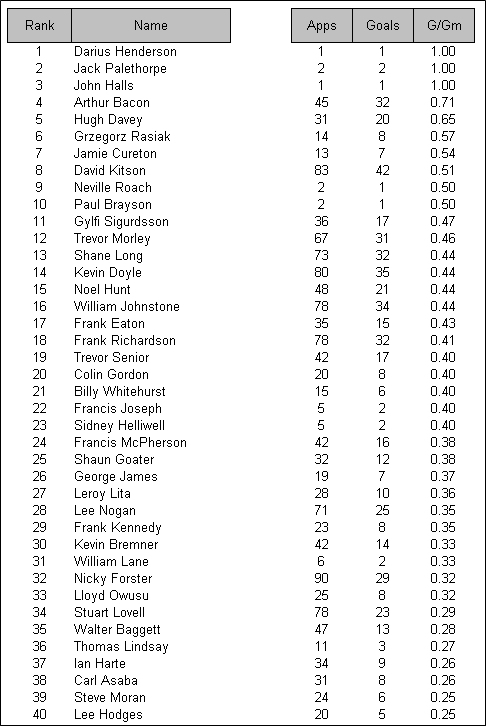 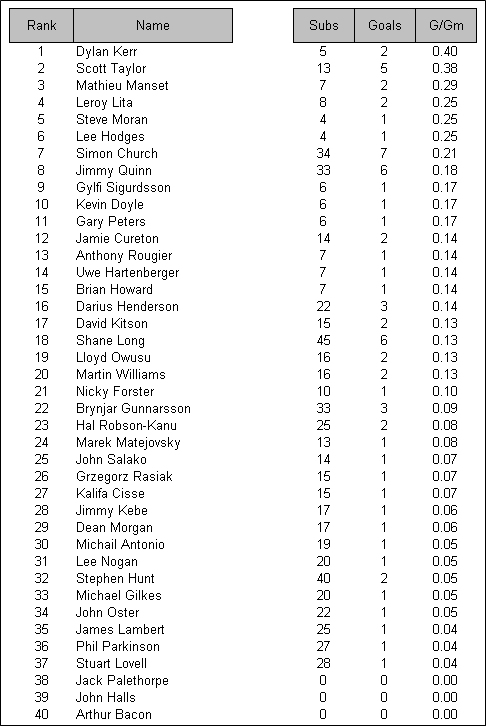 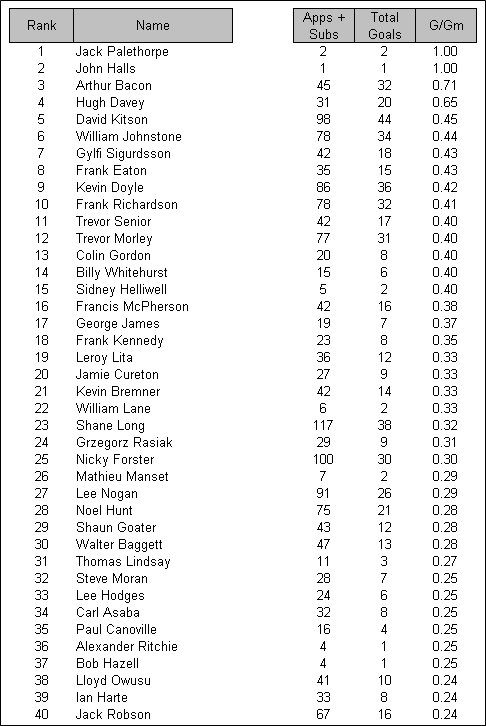 Having briefly mentioned goalscoring substitutes above, we should complete this short review of our 2nd tier league history by looking a bit more closely at the bench-warmers. Table 8 shows the top 40 players ranked by most substitute appearances. The more modern players tend to drift to the top of the list because 3 subs are the norm nowadays, so it’s no surprise to see the likes of Shane Long, Stephen Hunt and Simon Church in the top 3.

Going through the records, it’s worthwhile remembering the basic league rules regarding numbers of substitutes:

Jimmy Quinn and Stuart Lovell are probably the highest of those playing in the “two substitute” days, and Dean Horrix probably has the most substitute appearances in the days when only one sub was permitted.

With the increasing size of named match-day squads, the opportunity of racking up large numbers of non-paying substitute “appearances” has mushroomed. Naturally, the regular stand-in goalkeepers would amass large totals, and RFC is no exception. Table 9 shows the current top 40 non-playing subs in the 2nd tier, and the top 5 are all keepers. Ricky Newman (with 39) is the highest outfield player, and presumably Hal Robson-Kanu, (32), and Alex Pearce, (29), would dearly love to not break that record.

Lastly, the eagle-eyed would have spotted a column headed “Games Subbed” in some of these tables. Now I could be cruel and list those players who have been hauled off the most times, or indeed those players who have the highest ratio of being subbed to matches started. However, that wouldn’t be fair on Glen Little, (subbed 40 times in 74 2nd tier starts), or Les Ferdinand, (subbed 4 times in 4 starts), James Henry (4 in 4), Robert Codner (3 in 3) or Mattieu Manset (1 in 1). Next on the list are: John Oster (taken off 10 times in 11 2nd tier starts), Jim McIntyre, (5 in 6), Nathan Tyson, (7 in 9), Uwe Hartenberger, (6 in 8) and Simon Church, taken off so far 26 times in 35 2nd tier starts. 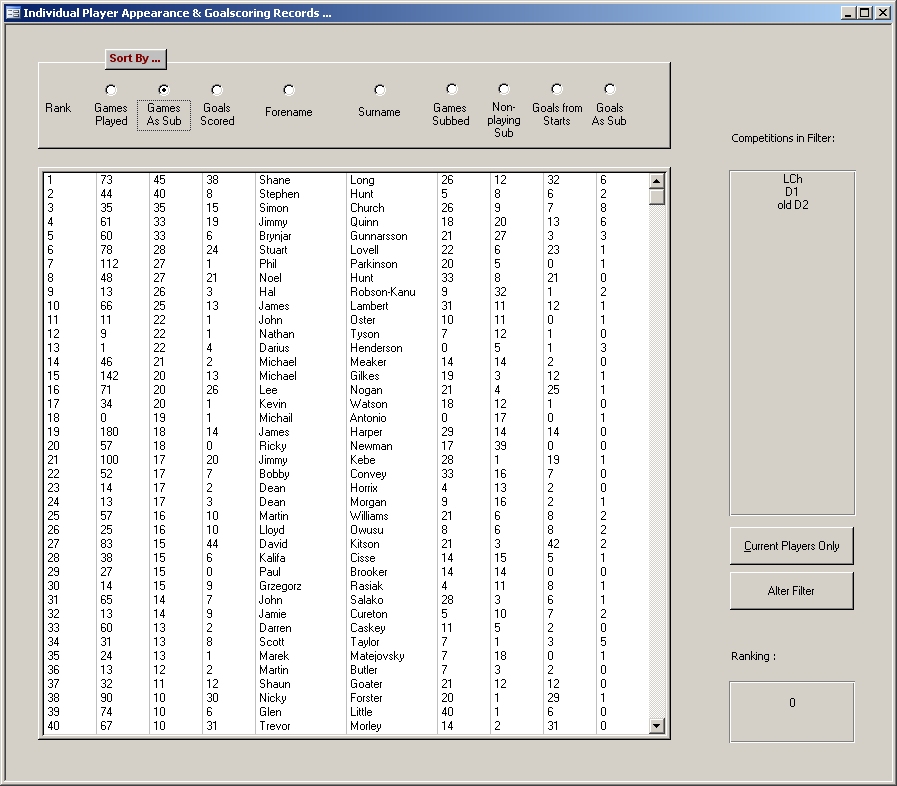 Table 9 – Non-playing Substitutes in the 2nd tier for RFC 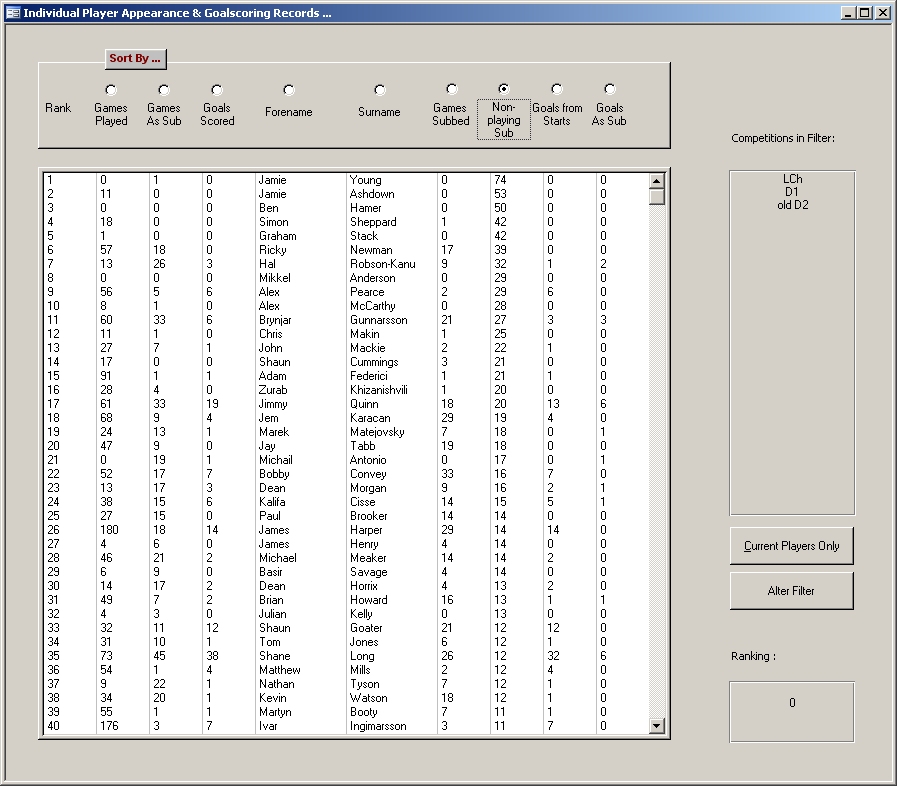 In the second part of this review of RFC’s 2nd tier history, we will delve into more detail of the actual playing records. Which opponent have we met most often? Who have we beaten most times, and who is our 2nd tier bogey team?

We will also look at the win/draw/lose records of the players themselves to try to arrive at the most successful composite team we have ever had in the 2nd tier, and finally we will review the managers’ records during these 18 eventful years, from the sublime, (Sir Steve Coppell and Brian McDermott), to the ridiculous, (Bodger and Terry the Taxi).