The case for the defence - What is Reading FC's best central defensive partnership?

Share All sharing options for: The case for the defence - What is Reading FC's best central defensive partnership?

In the wake of our 2-0 victory over Scunthorpe yesterday Jay Tabb proclaimed on BBC Radio Berkshire that he felt we had the strongest squad depth in the Championship, and given our recent form it's hard to disagree with him. One particular area of depth has been in the centre of defence, where five different players have started this season, with a sixth in Sean Morrison also occupying the bench. But out of these five who has been the most successful this season, and who should we be looking to play going forward?

After the jump, I'll be looking at the stats to see just who's been the best and worst combination this season, and seeing if that gives us any clues going forward. An area of particular concern considering that two of the five are out of contract in the summer.

It's amazing how quickly fans perceptions of players can change.  On Friday December 17th last year, Shane Long had found the net just once from open play in 19 league starts and questions were being asked if he should be rested, dropped or outright sold. Yesterday Shane Long slammed home his 23rd Reading goal of the season and we're worrying about who might come in for him should we fail to gain promotion.

Similarly when we went into this season Reading fans were worried about the centre of the defence, questioning if we had two defenders of Championship quality, yet alone Premier League quality. Perhaps a justifiable concern considering that on the opening day of the season Reading has just two fit senior centre backs at the football club.

Matt Mills was the team captain, having been through an up and down first season that saw him a hero in Brian McDermott's resurrection project and yet suffer from indiscipline and a falling out with the fans over gestures he made to the crowd towards the end of a 1-0 win over QPR. The fans forgave Matt but there was still a feeling that maybe his skills on the pitch weren't up the reported £2 million plus we'd paid for him from Doncaster in the Summer of 2009.

Alex Pearce meanwhile was also perhaps a victim of hype and over expectation. Pearce was just 21 at the start of this season but had already made 38 league starts for the Royals since breaking into the team under Steve Coppell in 2008/09. Still Pearce was seen to some as too close to former manager Brendan Rodgers, who had hyped Pearce up as 'the new John Terry' and had given Pearce the armband during his unsuccessful reign as manager at the start of last season. Pearce hadn't been awful during last year but some fans, including myself it must be said, felt a lack of pace might hold the defender back and questions were raised about his long term future as a top Championship centre back. 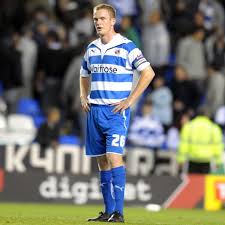 Ivar Ingimarsson is nothing short of a club legend, being part of the side that stormed to the Championship title with 106 points and being named player of the year during our first season in the Premier League. Sadly injuries and age had caught up with the 33-year-old Icelander, who missed the back-end of 09/10 with injury and was set to miss the start of this campaign.

That left Brynjar Gunnarsson as the only fit cover at centre back, though 'Brynaldo' is a central midfielder by trade and though steady, isn't the best long-term starter at the heart of the defence. So pre-season right back Andy Griffin had also been given time at centre-back to help fill in if required.

The above added up to an uncertain time heading into this campaign and fans were calling for the club to go out and re-sign Georgian captain Zurab Khizanishvili who had enjoyed a successful loan spell with the club in the second half of the previous season. Unfortunately the club didn't have the finances to secure his signing, until the deadline day departure of Gylfi Sigurdsson that was, when Zurab signed on loan for the rest of the year.

But as we all know that pessimism and concern has been proved wrong as the Royals are now within three points of an automatic promotion place, but have any of our defenders been more or less responsible for our fortunes this year?

Here are the stats per partnership, in order of most appearances.

The stats show that statistically, Ivar Ingimarsson and Zurab Khizanishvili are the partnership most likely to get you a win, as they've played in four games together winning them all. Those wins all coming in the four games leading up to last night's win at Scunthorpe.

Of the partnerships with more than four games, Matt Mills and Alex Pearce are the best at keeping goals out, averaging less than a goal a game with four clean sheets. On the other hand Ingimarsson and Mills are shipping around 1.57 goals per game, with just one win when they've started.

Going forward and it's Mills and Zurab who are most likely to help the team score, with the team averaging nearly two and a half goals per game when they start. That's nearly a goal per game more than when Pearce and Mills start together.

But before we read too much into the numbers it is worth bearing in mind the style that the team was playing and the general form we've been in when different combinations have been playing. For example, Mills and Pearce played a lot together during the 4-5-1 pre Leigertwood era which can explain the lack of goals. Similarly, Ivar and Mills played in the spell where we played tough teams such as QPR, Norwich and Cardiff, helping to explain their lack of success.

To me the one that sticks out is Zurab. If you take into account all of his partnerships his line reads

When Khizanishvili plays we're scoring just about a goal a game more then we concede, something that's obviously quite important to WIN football games. He's also got a clean sheet ratio better then 1/3 which takes the pressure off the attacking players to score goals.

I personally think that Zurab is the best defender we have at the club and going forward, the one most capable of playing at the Premier League level should we make it. He's the most composed on the ball, has the most big game experience and is still under 30, meaning he's in his prime now, or just hitting it. He, knows the club, knows the manager and the fans love him as well, which helps if the team is going through a bad spell. I don't think Ivar, Mills or Pearce have quite the same love from the fans with all three of them coming in for criticism at times in the last couple of years, albeit some of that justified. That's not to say Zurab is perfect, he has made mistakes this year and has has my heart racing by dallying on the ball once or twice. There's also the fact that he doesn't seem to have the knack at scoring goals then Mills or Pearce, with those two chipping in with 23 career league goals compared with Zurab's two. Despite that I'd still have him as my first name on the teamsheet for the defence and I think it's vital no matter what league we're in next year that the funds be found to sign him up.

Partner wise it's a battle between Pearce and Mills. The former Doncaster man has the edge in terms of leadership and experience, but it's interesting that stat wise we're more solid defensively when Pearce plays. It's a real toss-up for me because both men have potential and both have been inspirational at times with gutsy displays and key goals. If you hold a gun to my head, or worse ask me to be Reading manager, I'd go for Zurab and Pearce. As much as I like Mills, I still worry about his temperament and his distribution is still questionable. I think Pearce is very solid and reads the game well, a trait that links him up well with Zurab who is also calm and composed.  Mills should still be kept at the club and if he turns out to be a great defender it wouldn't shock me. I think Ivar's time here is over, he's a capable fill in but with Morrison getting experience all the time it makes sense to give him a go rather than play Ivar from the start. Gunnarsson is also likely done as a centre back option, with Jack Mills coming through the ranks well and impressing on loan at  Dutch side Telstar and with the England youth setup.

But what do you think? Who would be your prefered partnership?