Tomorrow afternoon Chris Armstrong will lead out both teams at the Madejski Stadium, giving both players and fans the chance to show their appreciation towards a truly inspirational player, who has legitimately touched thousands of those in the football family and beyond.

Share All sharing options for: Chris Armstrong - A Look Back On The Career Of One Of Football's Good Guys

Armstrong retired in March after revealing he'd been diagnosed with Multiple Sclerosis back in December 2009, admitting that his body could no longer handle the rigours of top-level football. The fact that Armstrong battled back through not just MS, but a serious knee injury, to play seven times for the Royals this season is a testament to the character, determination and strength of the man. Below the jump we'll be doing our best to honour the former Bury, Oldham, Blackpool, Sheffield United and Reading fullback, we liked to call Stretch.

There have been few footballers that have made such a big impact on Reading Football Club in such a small period of time as Chris Armstrong. In his only full season of fitness since joining the club in 2008, the left back was named the fans player of the year, before missing virtually all of 2009/2010 and being forced to retire midway through this campaign due to MS.

But to look at his time as a Royal tells half a story of a man who made over 200 appearances in a 12 year career for five different clubs.

Armstrong started his career at Bury signing professional terms while Neil Warnock was in charge. Armstrong broke into the first team in December of 2000 at the age of 18 against Mansfield in the opening round of the LDV Vans trophy. The match was an eventful one for Chris, who was booked and also cleared one off the line in a 2-1 victory for the Shakers. 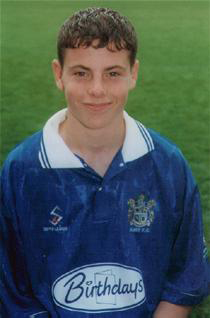 Before the end of that season Armstrong would score his first career goal against Oxford (a Royal from the start...) and would play for Bury at the Madejski Stadium in a 4-1 defeat to Alan Pardew's side. One fan who saw Armstrong in his early days said

I saw Chris at Bury, he was a tremendous young LB with a great attitude and willingness to learn. When Warnock left and went to SUFC he took Chris (and a couple of others) with him, knowing he could ply his trade at a higher level.

The defender wouldn't stay at Gigg lane for long, moving to Oldham in October 2001 for £200,000 and coincidentally made his Athletic debut against Reading in a 1-0 Royals win at Boundary Park. Over the next year and a half Armstrong would play over 70 games for the Latics, including both legs of their unsuccessful Division 2 play-off semi finals against QPR at the end of the 2002/2003 season.

Armstrong would also represent England at Under 20 level during his time at Oldham, appearing in the 2002 Toulon tournament, playing against China, Portugal and Japan. Stretch would line up alongside a future Royal in John Halls, as well as future England defender Joleon Lescott.

Come the summer and Armstrong was off again. With Oldham cash strapped Armstrong was allowed to join Neil Warnock's Sheffield United for £100,000,. Armstrong made his debut in the opening game of the season in a 0-0 draw with Gillingham, playing in front of Paddy Kenny, who had also been in the Bury team when Armstrong made his debut there as well as a former Royal, Carl Asaba. Armstrong would score his first goal for the club a few weeks later against Crewe, and face the Royals in a 2-1 defeat at Bramall Lane before suffering a serious knee injury that kept him out for the rest of the season and the season after.

There were serious fears that Armstrong would retire, with Neil Warnock revealing.

At Sheffield he suffered a terrible knee injury and was offered a substantial sum of insurance money to retire. I thought he would never play again and was surprised he didn't take it.

Armstrong never gave in and during 2005/2006 the Newcastle born player battled his way back into the reckoning at Bramall Lane, even making a loan switch to Blackpool to help improve his fitness in October of 2005. When he returned to the Blades he played a key part in helping Sheffield United join Reading in the Premier League, as they finished runners-up to the Championship winning Royals.

That promotion gave Armstrong his first, and sadly only season of Premier League football as the Blades suffered the pain of a final day relegation from the top flight. Had it not been for the Carlos Tevez affair there is every chance that Armstrong would had added to his 24 Premier League starts. He played in both games against Reading that season, with Stretch ending up playing a part in one of the most explosive games in the history of the Madejski stadium, as Steve Sidwell's tackle on the former Oldham man sparked chaos on the touchline.

After the Blades relegation, Armstrong stayed with the club, playing over half the league games in 2007/08 and scoring a career high three goals. But the Blades failed to make it back to the top flight. Chris also earned further international honours, playing for Scotland B in a game against an Ireland B team featuring future Royal Noel Hunt. For Stretch the chance to play at international level helped vindicate his decision to keep playing after his injury.

"I was out for a year and a half but this is what all the hard work was for."

It was at the start of the 2008/09 season where Armstrong would make the move down south to join the Royals. Having lost Nicky Shorey and Ulises De La Cruz, Steve Coppell moved to sign the left back, paying an initial £500,000 to United for his services. Then Blades manager Kevin Blackwell said he didn't want to let the Newcastle born defender go but couldn't stand in his way.

"I didn't have any intention of letting him go but the offer came in and, with his immediate chances of a first-team place a bit limited, I didn't feel it proper to deny him the chance of a good move for him.

"He's a great lad to have around, a good professional and he has been a good servant and we wish him all the best."

"We decided to make the investment in Chris and he's very, very solid at the level. He understands the league and the position, hopefully he can make a positive contribution."

Armstrong certainly made a positive contribution over the next few months, helping Reading into the an automatic promotion race that went right down the final game of the season, scoring his only Reading goal against Watford in a 4-0 win. Sadly Armstrong would miss the closing games of the season and the play-off campaign against Burnley due to injury but the fans still voted him player of the season. The left back was never spectacular, he couldn't score a free-kick like Shorey, nor was he a crowd pleaser like Dylan Kerr or (early) Matt Robinson. What Armstrong brought to the team was a guaranteed 7.5/10 performance week in week out, helping the team in attack and defence and never letting us down. In a season that saw more recognised stars like Kevin Doyle and Stephen Hunt fizzle out, Armstrong was as reliable as they came and during a turbulent time on and off the pitch, we knew as fans there was one player to count on. 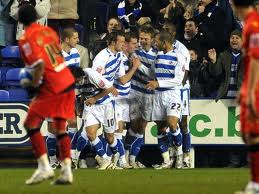 Armstrong tried to work his way back to fitness under Brendan Rodgers the next season and even appeared in a Carling Cup game against Burton, but suffered an injury setback shortly afterwards and wouldn't appear again for the rest of the season.

Fans began to worry if they would ever see Armstrong in a Reading shirt again as rumours began to circulate that his injury was too serious to come back from. He even gave up his squad number 3 to new signing Marcus Williams at the start of the 2010/11 season. Then almost out of nowhere, Chris was back in the team - not at left back, but as a stand in central midfielder against Barnsley, helping Reading to a 3-0 win. Armstrong played the next few games before reverting back to a substitute role, though his final appearance coming in a 90 minute performance at left back in a 4-1 win over Bristol City on Boxing Day.

Chris would take a place on the bench sporadically over the next few months, but never made it onto the pitch again, retiring just days after being on the bench in our 1-0 FA Cup 5th Round win away at Everton, not a bad way to finish your career. But then that's perhaps part of the tragedy, in that Armstrong was still capable of performing at this level, but it just became too hard for him, and with a young family to think of, you can't blame the guy. Amazingly most of the players and staff were unaware that Armstrong was battling the illness, despite training and playing for 14 months after being diagnosed. In the days and weeks following, his fellow players, the staff and even the chairman have all paid personal tributes to Chris, but I like this quote the best, from Brian McDermott.

"Chris has been an inspiration to me. Over a long period I've had many conversations with him, he's a quiet, unassuming man who absolutely sums up everything that is good about human beings. Nobody could have tried harder and given more than he has given.

Since the announcement Chris has been keen to stay out of the limelight, just as he always was as a player. He's not made a fuss, give hundreds of interviews to the media or asked for sympathy. Instead he's still backing the players, coming to games and spending the time he needs to fight this cruel, cruel disease. On Saturday Armstrong will get not what he's asked for, but what he DESERVES and that's a few moments on a football pitch to say goodbye to Reading and Sheffield United fans who are desperate to give him the send off he deserves. In an era where players are in the press and on our TV screens for plenty of wrong reasons, its inspirational to see how much Chris has given to us as fans, to his team-mates and manager.

Chris may not hold any scoring records at the Madejski, may not have won any major medals here or have played much in the past two seasons but he is one of the most influential players we're ever likely to have at the club. 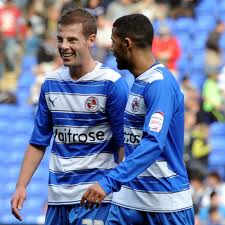 So here's to you Stretch,good luck and lets get #promotionforarmstrong !

PS: Also a reminder that they'll be a collection for the Berkshire MS Therapy Centre at the game on Monday :)