Yesterday I was given the fairly mind numbing task of opening the post at work, not a glamorous job but apparently it was my turn. In the two and a half hours I spent sat there, opening and sorting, I entertained myself by trying to make up Reading XIs. Loanees were a bit too easy, as was an international XI. It was however doing the latter that I suddenly thought, "we currently have two Caribbean internationals, I wonder if I can make a Caribbean XI". So that was my slightly pointless task and against all odds I was successful. It’s probably fair to say that I’ve taken a few liberties; one player never actually played for us, another is from East London and didn’t play internationally and technically I don’t think the Cayman Islands are in the Caribbean. Regardless, below you'll find my Caribbean XI. 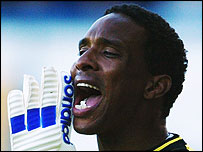 Arguably Reading’s best ever goalkeeper, Shaka is one of the few players to have left the club and really made a name for himself in the Premiership. The giant goalkeeper played over 100 times for the Royals and helped them to the Division 2 (as it was then called) title in 1994 and to the playoff final in 1995 before leaving for Newcastle United. He actually played for the England Under 21 side as an over-age player and sat on the bench for the full team before switching allegiances to Trinidad and Tobago for whom he won 26 caps, including an appearance against England at the 2006 World Cup. Shaka now works for ESPN and you can follow him on twitter @ShakaHislop

Local boy Louie Soares never made a first team appearance for the Royals but after being released in 2005 he has made a career for himself in the lower leagues. After establishing himself in the Aldershot side that gained promotion to the Football League in 2007, last year he joined League Two side Southend United. During his time at the Shots he was called up by Barbados to play in the Caribbean Nations Cup earning himself 2 caps and scoring in their 3-2 defeat to Martinique.

Ok, this one is a bit of a cheat as Linvoy has never actually played international football but I’m struggling to find any other defenders for this team! Linvoy makes the side due to his parents being from Jamaica and St Vincent respectively. Primus was, along with Lee Hodges, was one of Terry Bullivant’s few good signings when he joined from Barnet in 1997 and was one of the few decent performers in the side that got relegated that season. However, after a string of injuries he was allowed to join Portsmouth on a free transfer in 2000 after notching up 94 games for the club. After retiring in 2009 Linvoy has concentrated on his charity work and made an emotional appearance at Reading’s game at Fratton Park in 2010 to see the unveiling of the Linvoy Primus stand. You can follow him on twitter linvoy_primus 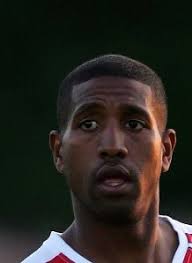 After joining on loan from QPR in January, Antiguan international Mikele Leigertwood has become something of a talisman for Reading. Since he arrived he has played 24 times and has only been on the losing side twice; indeed he went an extraordinary 19 league games before he tasted defeat against Sheffield United. On the international scene he has played 6 games in the Caribbean Championship scoring one goal against Guyana back in 2008. He goes in at centre half in my team despite being so influential in midfield as he started his career there. Mikele is another on twitter and can be followed @ASLmleigertwood

A true Reading legend, Gilksey played nearly 400 times for the Royals and was part of both sides to visit Wembley. It was his late penalty that put Reading into the Simod Cup final in 1988 and of course secured himself a place in Reading’s history books by scoring the all-important equalizer in the 4-1 win over Luton at Wembley. The lightening quick winger also played his part in the heartbreak that was the 1995 playoff final. He also picked up 5 caps for Barbados toward the end of his career. After 13 years at Reading, in 2005 he was voted the best left winger in the club’s history with a massive 80% of the vote. Despite that, he can play at left back in my team. You can now hear Gilksey commentating on most Reading games on Reading 107.

Jamaican international Lisbie didn’t really have the most auspicious of Reading careers after arriving on loan from Charlton in 1999. He played only 2 games, failing to score in either. He has had a bit of a nomadic existence since then, never really establishing himself at any club. Fans who made the midweek trip to the New Den back in September may recall him popping up again at yet another club in the form of Millwall.

The second of three Jamaicans in my side and the only current player (what with Leigertwood only being on loan), Jobi McAnuff gets a central midfield role in my side. Granted he’s only played this role fleetingly but I’m going to use his run against Liverpool as justification for putting him in the middle. It seems amazing that a player as skilful as McAnuff has yet to grace the Premiership but he’s spent pretty much the entirety of his career as a Championship player. Perhaps also surprising is the fact that he only picked up 1 cap for Jamaica before retiring from international football. Comfortable on either flank he has been a consistent selection for the last two years. 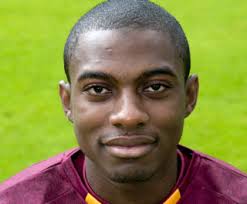 Remember Omar Daley? He arrived on loan from Jamaican side Portmore United back in 2003 after impressing in a trial at the club. Despite coming with a big reputation having had trials at Everton, Charlton and Brazilian side Vasco da Gama, he didn’t make much of an impact. Restricted to half a dozen games from the bench Daley looked like a player that had the skills to be a decent player, but never really the mentality. He has since played over 100 games for Bradford in League 2 and with 63 caps, is one his country’s most capped players.

What an enigma the Trinidadian was. There was no doubting his entertainment value, outdoing Paul Gascoigne for skill in Phil Parkinson’s testimonial was quite wonderful, as was his marvellous cameo against Oxford United in the quagmire that was the Madejski. The problem for the Rouge was simple, there were no goals. In three years at the club he managed only 6 and although he was part of the side that gained promotion in 2002, much of his time at the club was spent on the bench or out on the wing where he faced strong competition from John Salako and Sammy Igoe. Unfortunately he will probably remain in most fans’ memories for his extra time own goal in the 2001 playoff final against Walsall. He is now player/manager of FC South End back in his native Trinidad and Tobago and picked up 65 international caps. 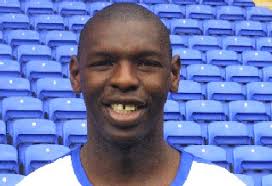 Feed the Goat and he’ll, well probably miss. Goater arrived under great fanfare from Manchester City back in 2003. He remains something of a hero to City fans after his goal against United helped them to victory in the last ever Manchester derby at Maine Road. After a promising start at Reading Goater struggled when Steve Coppell came in and he became more of a bit part player, eventually being shipped out to Southend after only two years. A legend back in Bermuda he has done wonders for promoting the game and is now chairman, and part time player, of their first ever professional side, Bermuda Hogges who play in the third tier of US football. You can follow their progress on twitter by following the Goat @Shaun_Goater

Despite working his way through the youth ranks at Reading and scoring on his debut against Oldham Athletic in 1997, local lad Roach failed to impress new manager Tommy Burns and soon found his way out of the club. Since then he has made a solid career for himself in non-league football, playing for several clubs. In 2000 He was part of an attempt by the Cayman Islands FA to circumnavigate FIFA rules over residency and was called up to the national side despite no connections with the country. He played in a friendly against US side DC United but FIFA quickly stepped in and prevented him playing in any official games. Injuries eventually got the better of him last year and he was forced to retire aged only 32. He has subsequently moved into management and now manages Hartney Wintney in the Combined Counties League Division One.

Every side needs a manager and mine is a former Reading loanee and manager, FA Cup final winner and goal scorer, Sunderland legend Ian Porterfield. It’s probably fair to say that his time at the club was, both times, pretty unspectacular with him having the dubious honour of being the first manager sacked by John Madejski in 1991. After a brief spell as Chelsea manager he has had stints in charge of several developing nations including Zambia, Oman, Zimbabwe, Armenia and most importantly of all for my team, Trinidad and Tobago in 2001. Sadly he passed away in 2007 after suffering from colon cancer.

So there we go. The team will be lightning quick and should provide plenty of crosses for Goater to nod in. Although having said that, some of the fans behind the goal may have to wear helmets because there’re no guarantees that the majority of those crosses won’t end up in the stands! It’s been fun reading up on some of the less heralded players from the last 15 years or so but please feel free to leave any memories of any of the players mentioned or indeed chastise me for the inevitable glaring omissions!