Share All sharing options for: View From The Town End - Cardiff City (Play-Offs) 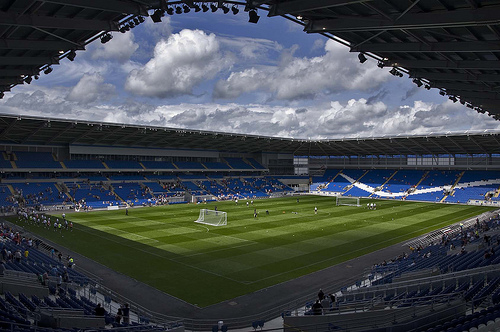 So we're now just 24 hours away from the first leg of the play-off semi-final against Cardiff at the Madejski Stadium. Both sides have plenty of play-off hurt in their past and at least one of them will be facing pain again come 10.30pm on Tuesday night.

As usual ahead of a game we've asked for the views from the opposition and Cardiff fan Simon Richards was kind enough to give us his thoughts on these two matches.

Bizarre, disappointing but more than anything exciting. Considering our playoff defeat at Wembley last season looked set to herald a year of mid-table mediocrity for the club we should all be happy with 4th place. However the arrival of certain star players lit the torch paper and gave rise to expectation levels, which I feel were completely justified.

We’ve had massive highs, such as Bellamy’s winner away at Swansea, and incredible low’s, the 3-0 drubbing against ‘Boro but the overall feeling is one of frustration and disappointment. We know this division wasn’t particularly strong so this season was our chance and we didn’t grab it as we hoped.  This coupled with the usual capitulations has left me wondering if we’ll ever reach the promised land.

Dave Jones is one of the longest serving managers in the game, how have you viewed his time with the club and will failure in the play-offs spell the end?

When I started watching the club during the early 90’s we were in the basement division playing god awful footie in front of a few thousand at a rusty Ninian Park (god rest it’s soul).

During Jones’ reign we’ve had 3 trips to Wembley, a new stadium and some great players on the pitch to enjoy as well as our highest league positions for generations. So on the whole many would see it as a great time and I think history will be very positive about his time in South Wales.

However let’s not rest on our Laurels. Just because we used to be rubbish doesn’t mean we should put up with mediocrity now.

This season he’s been backed by the board, been able to bring in high quality players on a massive wage budget and simply not created a team that has gelled over long periods. We rarely win a game after going behind and many feel this is down to Jones’ lack of tactical knowhow and indeed a lack of a plan B.

He’s never been a popular name down here, mainly thanks to his dour persona and lack lustre appearance on the sidelines so have no doubt that failure in the play-offs will be the end for him. I will nod my hat and say thank you but look forward to a new era should that happen.

Some football followers have raised questions about the way Cardiff have been run financially, how have the fans viewed events over the past couple of years and what does the future hold?

Peter Ridsdale was an out and out disaster – from the golden ticket fiasco to the constant transfer promises he gave to fans.

I don’t think Cardiff have done anything wrong this season, sure the Man City and Bellamy situation shows the loan system up as being a little lax but the Bluebirds have simply harnessed the Welshman’s desire to play for his hometown club.

We are now well run financially and another season in the Championship will certainly see our wage bill cut by around 30%.

Which Cardiff players should Royals fans watch out for?

I know it’s obvious but Craig Bellamy is the man. He is the heartbeat of the team and a real desire burns in him to get us promoted. He has flourished in a front two along side England Cap Bothroyd and seems to enjoy playing off the defenders shoulder. On his day he can tear teams apart and even when he is poor he is able motivate players.

However we really need our back 4 to put it together against the Royals. Hudson and Keinan have been very good this season and Quinn and McNaughton are quality full backs. However we have a slow CB partnership and no cover from midfield. The midfield battle will be key to the 2 fixtures.

Who are Cardiff fans worried about from Reading?

Kebe and Long but I understand Kebe is a doubt. We really fear players that run at defenders and know that the team has a fair bit of pace about it.

And of course we hope the ‘former player curse’ doesn’t hit us with 'Jodie' McAnuff causing issues.

Our two games against you this season saw a number of poor performances from our full backs. However we are settled there now so fingers crossed we will be better defensively.

Don’t listen to all the rubbish about the intimidating area. We were recently voted Family Club of the Year and have made great strides eradicating some of our less than positive fans.

Enjoy what will be a great atmosphere. Expect a bit of grief in the stadium should we lose – but that will be aimed at Jones and the management.

I have very little optimism but will have to back my boys.

Who do you think will win at Wembley?

I’m almost certain we wont. I was fearing a South Wales derby defeat to Swansea but think that Swansea’s poor away form will cost them against Forest. If Reading can beat Cardiff they will take great momentum into the game and will have a great chance.

Forest to win against Cardiff in the final second of extra time. That would sit well with the last few seasons.