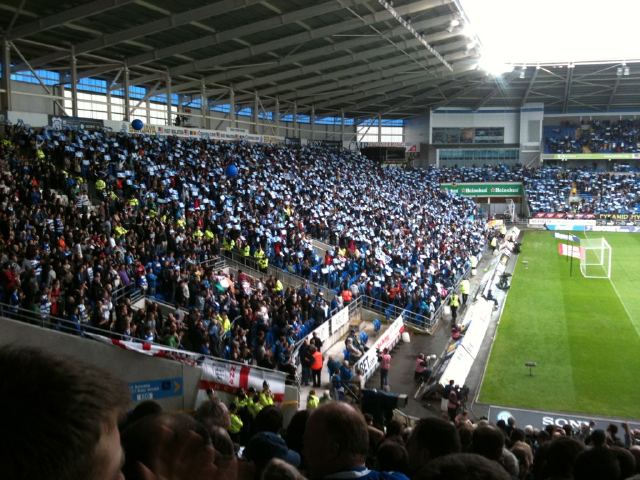 So we won then? Heck yes! a magnificent performance saw the Royals win 3-0 on the night and on aggregate to make it to Wembley where they'll face Swansea for a place in the Premier League.

MOTM: Shane Long was the best of a brilliant bunch, with his excellent finish for the first goal backed up by a cool head when taking his penalty for the second. Beyond that the Republic of Ireland man worked tirelessly and fully deserved the MOTM award given by Sky.

WE ARE GOING TO WEMBLEY!!!!

What a night in the history of Reading Football Club. To go to Cardiff and win so convincingly is a remarkable feat and Brian McDermott and they players deserve all of the plaudits they're getting today. No matter what happens on May 30th this has been a season to remember and every Reading fan should enjoy the next couple of weeks.

Full credit to the more than 2,000 Reading fans who headed down to South Wales and who were treated to an amazing night of football, but one that could have gone oh so differently were it not for a moment of madness from Cardiff keeper Stephen Bywater.

Going into the game the confidence of the Reading faithful wasn't exactly sky high with Jimmy Kebe, Hal Robson-Kanu and even Michail Antonio all ruled out with injuries, meaning that Shaun Cummings would come into the side and play on the right side of the midfield.  There were even conspiracy theories before the game that Jimmy Kebe has been sold to Wolves, though such claims have been dismissed by the club according to Get Reading reporter Jonny Fordham.  On the positive side, Cardiff skipper Craig Bellamy was ruled out with a hamstring injury and wouldn't take any part in proceedings.

Reading had a chance in the opening couple of minutes when Long was wriggled free to the left of Bywater's goal, but the Irishman could only hit the side netting from a tight angle. From that point on the home side began to take charge, pumping balls in the box and firing a few shots in, fortunately all of which were straight at Royals goalkeeper Adam Federici. Matt Mills and Zurab Khizanishvili were resolute in the centre of the defence, with Mikele Leigertwood and Jem Karacan providing great cover the back four helping to keep the scoreline level.

The tension watching on the TV was just torture and I'm sure I'm not the only one who went absolutely crazy when on 28 minutes a long back pass deflected off a Cardiff head and into the path of Shane Long. Stephen Bywater raced out of his area to clear it and reached the ball first but his clearance hit Long who quickly controlled and chipped the ball into an empty net from 20 yards out. 1-0 and fans in houses across Berkshire went crazy.

At that point you wondered if it was going to be Everton all over again, with Reading having to sit through an hour of nervy football and keep us all on the edge of our seats. Thankfully Reading had other ideas this time and right on the stroke of half time Matt Mills was fouled in the box by Keinan to give us the chance to go 2-0 up. It was a bit of a surprise to see Shane Long stepping up to take it, given that Ian Harte has been on penalties recently, but Shane stepped up confidently and sent Bywater the wrong way to give us a vital two goal cushion.

Half time was a nervy affair.... we'd been 2-0 up in play-off games before and just 14 months ago we'd been 2-0 up against Aston Villa with Wembley on the horizon only to throw it all away. In some ways it felt even worse to be 2-0 up, as we now had the hope and the knowledge that it was within our grasp. To have that taken away would have been too much to take.

But Reading v2011 doesn't have that collective memory that the fanbase does and they showed absolutely no sign of nerves as they continued to attack throughout the second half.  Noel Hunt had two excellent chances to seal the win but couldn't take them, while Jobi McAnuff also made some impressive runs into the box, only to squander his chances.  Those misses didn't play on the mind of our left winger though, as Jobi stormed through the Cardiff defence six minutes from time to well and truly wrap up the game and send us to Wembley!

It was one of those nights that you'll always remember where you were, perhaps only surpassed in our history by Leicester away in 06, beating Coventry or Luton in the Simod Cup run, Forster's winner against Wigan or the final whistle going against Tranmere.

The celebrations on the pitch looked fantastic, but not over the top, it's not Reading's way and the players and staff know the job is only half done.  That being said, the scenes in the dressing room show just how much it meant to the players!  It was great to see that Chris Armstrong and Gylfi Sigurdsson were also there with the players, showing just how much of a team spirit there is at the club.

Just a quick work for Cardiff who were left to pick up the pieces on another disappointing season.  Much like ourselves in 08/09 they're facing massive upheaval as seven loan players leave the club and manager Dave Jones facing pressure to resign. While a minority of the home fans were idiots and threw things onto the pitch, it's still hard not to feel sorry for those genuine fans who've suffered heartbreak year after year... we as Reading fans know that feeling too well.

The Reading fans went mad throughout the final twenty minutes and it was great to see them all rewarded and celebrating come the final whistle. Thanks to Alex Everson (@readingfanman) who sent us this audio, giving a glimpse as to what it was like in the away end.

Reading Fans away at Cardiff

Reading Fans away at Cardiff 2

Yesterday was all about the Royals, who sent a message to Brendan Rodgers and Swansea that we're up for a battle and we're capable of really hurting anyone. Over the next couple of weeks decisions will need to be made about who plays in the final and we'll bring you all of the build up and analysis right here on The Tilehurst End, but for today lets just savour the moment and enjoy ourselves!