Share All sharing options for: View From The Town End - Cardiff City (Postmatch) 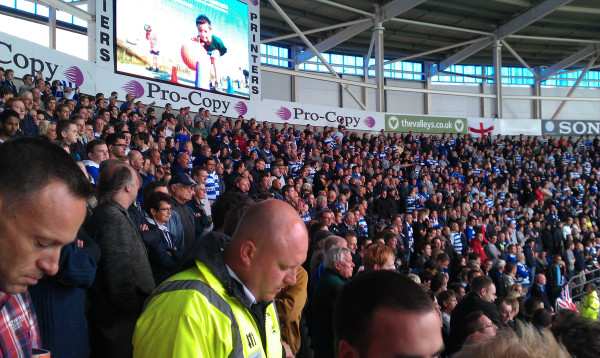 Credit to Chris Chapman (@Chappers88RFC) for the pic

Before the play-offs got started we asked a Cardiff Fan Simon Richards what he expected from the ties. Now, Simon has kindly agreed to give us his reflections on what might have been for Cardiff and what Reading fans can expect at Wembley.

Something quite strange has happened to me over the past couple of weeks. Something that’s only happened to me a few times in my life. The first time was when, after weeks and weeks of begging, I opened my brand new BMX bike on Christmas morning only to discover that what looked like red paint in the catalogue was in fact bright pink – I was 11.

The second time was when I was snogged under the bridge by Sandra Sandy  - she had diamond cut braces. And the third was when one of my flatmates at Uni turned up on the Jeremy Kyle show, to ask his mother to stop stripping on buses.

I am lost for words. I don’t mean I don’t know what to say, no I actually can’t scrabble around in my head to find meaning from our last 2 home performances. If this was the first time this sort of thing had happened then I’d be able to laugh it off jauntily, blame the god of football and happily shout ‘we’ll do it next year Sandy’. But no – worse than losing is the realisation that exactly the same thing will happen again next year, at least under Jones

Football is a game of winners and losers, sometimes you celebrate, sometimes you commiserate that’s the contract we all enter.  As a fan you’ll happily sit through hours of painful dirge for that one flashing moment of glory, that one celebration when you embrace strangers and cheer in perfect harmony. But it’s meant to have an element or randomness about it. You’re not meant to be able to look at the fixture list in July and say ‘Well we’re gonna lose 5 in Novemeber but win all our matches there and in May we’ll f@@k it up in an almighty good fashion’ – there’s no fun in knowing the ending before you go to the cinema (he’s already dead).

Last week Neil Lennon pleaded with his Celtic team ‘Don’t do a Cardiff’ before they, rather predictably, did a Cardiff and lost to lowly Inverness. I would put money on the phrase ‘Do a Cardiff’ entering the dictionary in 3 years time.

‘I tell you mate, I was carrying the pane of glass all the way upstairs when right at the last minute I tripped and did a Cardiff’.

Legend has it that a witch was told her coupons were useless in the Costco opposite the stadium and placed a curse on the pitch. The only way to rid it to force Dave Jones to eat sheep testacles. Sam Hamman has volunteered to cook them and it looks like he’s been practising on Chopra who is quite literally twice the man he was last season.

Sorry I can’t talk about the games – you won, we were awful – but I have banished them from my memory for my sanity’s sake, and placed them in a box deep in my sub-conscious.

Onto Wembley – get the £65 tickets as they’ll grant you a great view – eat loads before you get there and don’t stay in room 76 of the IBIS – that’s where my daughter was conceived prior to the FA Cup final , it’s still talked about to this day.

Cardiff fans all over are desperate for you to win, not just because of bragging rights but a Jacks victory could have a negative effect on our club for generations. It would ensure they got the best local youngsters, all the floating support and obviously a huge war chest.

If there was one team I would choose to face them it would be you guys (well no actually it would be Barcelona but let’s be realistic). If Cardiff had 10% of you team work ethic we’d have finished in the top 2.

Enjoy your day, win and make sure you haven’t got memories to hide in that little box. I don’t want people to say ‘Yeah he did a Reading’ in years to come – that’s our special little skill.

Thanks again to Simon and you can follow him @SJRichards79