Ten things the Royals need to do to beat Swansea

Share All sharing options for: Ten things the Royals need to do to beat Swansea

We've done it. We're through. We've comprehensively beaten Cardiff on their own turf. 3-0 the final score. On to Wembley.

Don't take anything for granted, the chants and songs of "We're going up, we're going up!" were all over the place on Tuesday night, but thse chants are premature; just as Swansea's pitch invasion was premature.

So, after the jump there's a list of the ten things that McDermott's men should be doing to beat Swansea, 'the Championship's Arsenal' (which means they won't win anything... right?).

The most obvious thing to do in any cup final is to show desire. Quite simple, not too difficult to have the desire, but to show it on the pitch is what the fans want to see. Even if Reading are on the back foot, showing some courage and some flair where it matters the most will get the fans on their feet and cheering; which will then spurr on the players to attack Swansea.

I'm going to make up a saying here and say 'he who shows the most desire will win'... of course, that's not strictly true but we'll stick with it for this one game.

McDermott will want the Royals to show passion

Big game. Huge game. The difference between playing in the best and most competitive league in the world and having to stay put, try and do the same thing as this season, and keep hold of our best players.

The pressure on the players must be immense, which can lead to some poor displays of sloppy passing, panicked clearances and hurried finishes. If we're going to come out on top, we'll have to remain calm. Pass the ball nicely, get it to the wings, get the balls into the box. It's what we're known for and it's what we're good at. So do it, and do it well, please.

Of course, being calm is just part of the problem on the big stage. This could be a very open, attacking game where both sides get numerous chances, or a very tight, tactical affair with both clubs looking to out-think the other.

Either way, we've got to be clinical. Hunt and Long must be testing the keeper at every opportunity because if, as some fans are saying, Swansea dominate possession and make us sit back and hope to hit on the break, then we'll need to take those counter-attacking chances when they come. Even if it is a more open and attacking game, our defence may concede and if that's the case then Long and the fellas up top will need to be scoring more than Swansea's frontmen.

7. BACK THE BOYS AND MAKE SOME NOISE

"Back the boys, and make some noise!" you'll often hear over the Madejski Stadium tannoy, but at Wembley it will never be so important. We can't just make the trip to Wembley and sit there, silently watching and hoping.

None of this fancy "ooh, ahh, oooo..." stuff, we want proper chants. Proper cheering. Proper screaming. Maybe even a few crying, emotional girls (or guys) who aren't afraid to show their passion for their team. Do that, and the players will (hopefully) respond.

6. HOPE SHANE LONG HAS A CRACKER 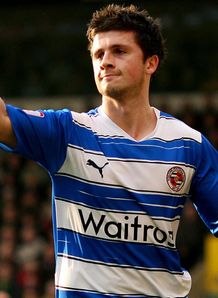 Long will need to be on top form

It's only recently that I've noticed the quality that Shane Long has. I still imagined him to be that scrawney, 20-year old super sub that used to come on for the last 15 minutes of Premiership games and hope he tore apart a few tired legs, hoping to nick a goal.

Now look at him, he's bulked up, and just improved massively. Now the all-round striker, it's not really a surprise to me that he's been linked with a summer move to Liverpool if the Royals don't go up. He's better than Ngog, surely?

If this play-off final is to be a success, you can't help but feel that this young man will need to be on top, top form. He was against Cardiff, scoring two goals and generally being a huge nuisance and a regular threat to the shaky Bywater. So let's hope he carries on this momentum.

Darren Pratley has been a key member of the Swans' midfield and scored the 50 yard goal that sealed Swansea's place in the final. Linked with a move to Bolton, the midfielder will have to be marshalled carefully by Karacan and Leigertwood, as he has the ability to split a defence and score a goal. 10 goals in 35 appearances is not a bad return for a midfielder, but he's not the only threat...

Much like he did at Reading, Rodgers swooped in for players he knew and had worked with when he moved to Swansea. Ex-Chelsea winger Scott Sinclair has been instrumental to the Swans this season. Think of him as a bit like their equivalent of Jimmy Kebe - he's usually missed when he's not playing. 19 goals in 41 appearances (but just 2 assists), he's a huge threat and someone that Griffin, Mills and the players around them will have to keep contained.

It's not an easy ask, but if he runs riot we won't have much of a chance of winning at all, as he is clearly a Premiership standard player.

Whereas Coppell was often criticised for making his substitutes too late in games, Brian McDermott is often praised by the fans for making the substitutes that make a difference. Countless times this season a substitute has helped us to turn the game around and I think at Wembley we could be in for a similar situation.

Whether it be a tactical substitute or simply a gung-ho approach to win the game, if McDermott can make the right subs at the right time then Swansea could be stuck in the Championship next season.

Press. It's a key feature of the footballing game in modern-day football, Barcelona are the team that everyone looks at when talking about pressing but even Chile in the world cup, who played a 3-4-3 formation, were pressing ridiculously high up the pitch and trying to cut short attacks.

This is what Reading will need to do to disrupt Swansea. They use their width, they get men forward and almost every player is comfortable on the ball. So pressing high up the pitch and stopping them getting their flow and rhythm is paramount.

Of course, McDermott could sit back and hope to hit Swansea on the counter, but I think the Swans have the comfort and technique on the ball to slowly and meticulously carress the ball into the net, without Reading having much of a sniff if they turn up on top form. Press high, disrupt their rhythm and get the ball to the wings for McAnuff and Kebe(?) to tear them apart.

1. HOPE KEBE IS BACK

I know we beat Cardiff, away, 3-0, without Jimmy Kebe or Hal Robson-Kanu, but I'm not entirely sure that we can do the same again. At the very least I'd like to see Robson-Kanu return if possible, but if we get Jimmy Kebe back in time for the final he could be the main man.

Yes, Long would preferably play out of his skin and score a couple of goals, but Kebe has that magical ability to turn a game on it's head. Swansea can have men forward, passing around, when Karacan can win the ball, lay it off to Kebe and the next thing you know Long has tapped Kebe's cross into the net. Of course, it could also be a one-man goal where Kebe wins the ball, runs the length of the pitch and finishes aplomb, but let's be slightly more realistic, shall we?

Even if we do all 10 things on this list, there's the possibility that Swansea can still beat us and we'll have to rebuild for next year, but if we do at least 5 of these things then we'll stand in good stead for the final at Wembley on May 30.