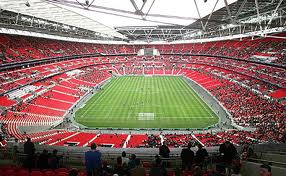 So What's At Stake Here? Only about £90 million pounds and a place in the biggest league in club football

And Who Are Standing In The Way? In case you've been living under a rock, Swansea City who finished third in the league and beat Nottingham Forest in the play-off semi-finals.

Any former Royals? Swansea's manager Brendan Rodgers had 6 months as our manager here last season and spent a good 10 years here as a coach.

Can I Still Get A Ticket? At the time of press (1pm May 27) there were a handful of tickets available in person at the Madejski Stadium.

Any Bits of Key Info About Wembley? Reading have provided a full Q+A which can be found here

TV Coverage? Yes the game will be live on Sky Sports One and in Sky 3D from 2pm

When the Tilehurst End was started a few months back I must admit that I was never expecting to write a Play-Off Final preview piece but here we are, just three days away from the biggest one-off game in our history.

This will be our third Play-Off final and we're due a win after heartbreak against Bolton and Walsall, not to mention the semi-final failures against Wolves and Burnley. Having seen all of those defeats, on a personal level I can't say I'm going into Monday with a tremendous amount of confidence but then again I never expected us to beat Liverpool, or Everton or even make the play-offs this season so what do I know!

Our opponents on the hallowed Wembley turf will be Swansea City, managed by former Reading coach, Academy Director and of course Manager, Brendan Rodgers. The history and reasons for Brendan's sacking have been well discussed in the past but it's nice to see there genuinely seems to be no ill-will from either party. The decision to sack Rodgers has worked out for all parties, no matter what the result of Monday's game and should Swansea win promotion, I'll be gutted as a Reading fan, but have a shred of comfort knowing another Reading fan is able to celebrate. No matter how you felt about Rodgers during his time here, he is still a Reading fan and gave great service to the club for many years so deserves a bit of respect.

However that respect will be all forgotten as soon as we step foot on the pitch against what promises to be a very dangerous and skillful Swansea side. The Swans beat us twice in the league this season, a 1-0 win at the Madejski Stadium in October thanks to a Scott Sinclair goal and then a 1-0 win at The Liberty Stadium on New Year's Day.  The home game wasn't exactly a cracking game, neither side were particularly adventurous though a patient Swansea side did have the better of the chances and probably deserved the three points.

Historically we have the edge in the head to head between the teams, with Reading winning 27 league games, compared with 25 Swansea wins and 10 draws. In cup games, both teams have won twice with one draw. But all of those previous games are irrelevant when looking ahead to Monday's game, after all it's a one off final and anything can happen.

Swansea do have players capable of hurting us though, not least 24 goal forward Scott Sinclair who's finally living up to his early career hype to help Swansea push on towards promotion. Elsewhere Nathan Dyer and Fabio Borini are other forwards that can hurt us and it's certainly going to be a tough day for our full-backs Andy Griffin and Ian Harte. Swansea are a 'typical Brendan Rodgers team' playing a 4-3-3 and keeping the ball on the deck wherever possible. They are happy to retain possession and patiently build, comfortable sitting deep and then breaking with deadly effect through Dyer and Sinclair. However, Nottingham Forest showed in the second leg of the play-off semi-final that if you press and pressure Swansea they can panic and resort to more long ball tactics, something that Reading are good at doing to opposition teams.  The Reading side that lost 1-0 at Swansea on the opening day of the year was missing Leigertwood, Karacan, Zurab, McAnuff and Hunt and that fact will make a key difference come 3pm Monday, with the greatest of respects to Tabb, Church and Alex Pearce.

As mentioned all of those players should be fit for the Royals, with 10 our of 11 places secure it seems the only question is who will play on the right hand side of the midfield.  Jimmy Kebe has been out for the last month with a groin problem, while Hal Robson-Kanu limped out of the first leg against Cardiff with a groin injury and even Michail Antonio missed the second leg through injury. That left full-back Shaun Cummings to fill in on the right of midfield at Cardiff and the former Chelsea youngster gave a good account of himself, showing he's a capable fill in. However, despite Cumming's role in the 3-0 second leg win you have to believe McDermott will revert to playing Kebe or Robson-Kanu if either man is fit. The news on Kebe is encouraging given that he took part in training yesterday while Robson-Kanu has been declared fit. Even if Kebe only makes the bench he'll be a big weapon so fingers crossed our Mali international makes it!

Personally I'm just looking forward to a great day out at the national stadium. Having been to see Reading at old Wembley and Cardiff, this will be my first trip to the new Wembley to see any game/event and I can't wait for it.

Prediction wise I'm going to be brave and say that we'll win the game 2-1 in extra time but really if you told me we'll win 5-0 or get beat 5-0 I'd not be that shocked. Whatever happens lets just enjoy the day!

It's a little bit early for most of the big sites to be doing match previews, so we'll have a separate media preview piece up over the weekend.

Meantime, here are some more thoughts of our writers here on The Tilehurst End.

Swansea are a very good footballing side and will be very hard to beat but we are as good as them on our day and arguably better than them on paper. If we manage to keep Scott Sinclair, Stephen Dobbie, Fabio Borini and Nathan Dyer quiet then we have a great chance, despite this they are no four-man team and we will have to play very well to beat them. Matt Mills will throw his body on the line time and time again to get us there and Shane Long will work his socks off all game long. Hopefully a fit Jimmy Kebe will give us more going forward.

Prediction:- 1-0 to Reading, Long to score

"I'm ridiculously excited about this! Unfortunately I have an exam the next morning so won't be heading to Wembley, but I'll be the loudest fan in Portsmouth!

I reckon it will be a close game. Very close with nothing giving - until the first goal goes in. The first goal decides everything, and I wouldn't be surprised to see Reading score first and then attempt to hit them on the counter as they attempt for an equaliser. On the other hand, if Swansea score first then we'll have to attack a bit more and commit players forward, as they keep the ball and play quick direct balls to Borini and Sinclair.

Whatever happens, it'll be a huge occasion. URZ!"

Thoughts: It is shaping up to be an open and exciting final with a winner hard to pick. Both sides had little expectation of reaching this point before the season started so both have nothing to lose and as Brian McDermott has pointed out it will go down to whoever turns up and plays on the day. This brings to mind our ability to achieve results in one off cup games under McDermott (Everton, Liverpool, West Brom, Burnley) so I am going to stick my neck out and back us. However if we don't do it I think the Championship is shaping up to be an excellent competition next year already with West Ham, Birmingham, Forest, Leeds, Burnley Southampton, Brighton and more all involved and I won't be sad to stay in the division.