The Play-off Ticket Experience - Part One

Share All sharing options for: The Play-off Ticket Experience - Part One

Now that the pain of the play-off final is starting to recede, The Tilehurst End has analysed the results of the survey we ran in May about the pain that so many experienced in the weeks before the Final – the purchasing of tickets.

As you probably remember, there were three options for purchasing tickets – in person from Reading FC, over the internet from a ticketing agency called TicketZone, or by
phone from the same agency.    In the interests of fairness, we asked for responses from everyone who’d bought tickets – regardless of how they bought them.  We got a pretty good response with 230 responses in all.  That might not seem many, but in a survey like this it’s certainly more than enough to give valid data – even more so as the survey data gives us pretty consistent response patterns.

For each of the ways Loyal Royals could purchase tickets, we asked them when they purchased these, how long it took them, and also asked them to give a rating out of 10 for each of a number of factors relevant to that method of purchasing tickets.  We then finished the survey by giving respondents the chance to comment or give us any other thoughts on their ticket-buying experience.

Over the next few days, we’ll look at the survey results for each of these sets of ticket-buyer, starting with those who bought tickets in person at the Madejski Stadium.

In all, 23% of our respondents chose to buy tickets in person through the club, and their responses are almost unanimous in praise for a very good job done by Reading FC and their
staff, and the overall organisation of ticket-buying.

The total time spent queuing to purchase tickets was less than 15 minutes for 46% of our respondents, and under an hour for 66% of people.  A further 28% had to queue between 1 - 3 hours, with only 6% queuing reporting that they queued for over 3 hours – and everyone queuing more than 1 hour did so at the “peak” selling days early on the Thursday and Saturdays when tickets first went on sale time to season-ticket holders and member card holders – and I suspect some of those queuing for over 3 hours were people who arrived before the ticket office was open, although the survey isn’t clear on this. 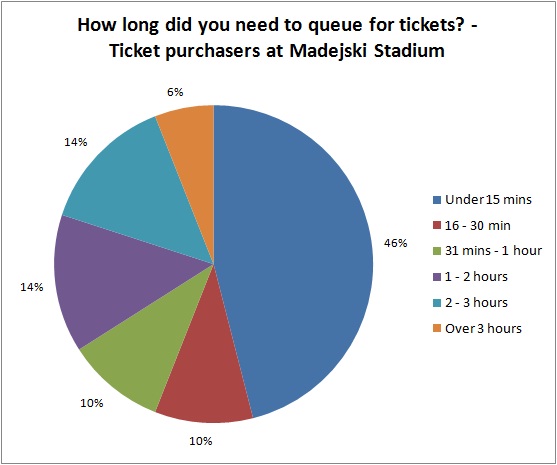 Not surprisingly, the overall rating of the ticket-buying experience gets similar marks, with an average rating of 8.25, and 37.5% of people rating the whole experience as “Superb” and 75% rating it as “Good” or better. 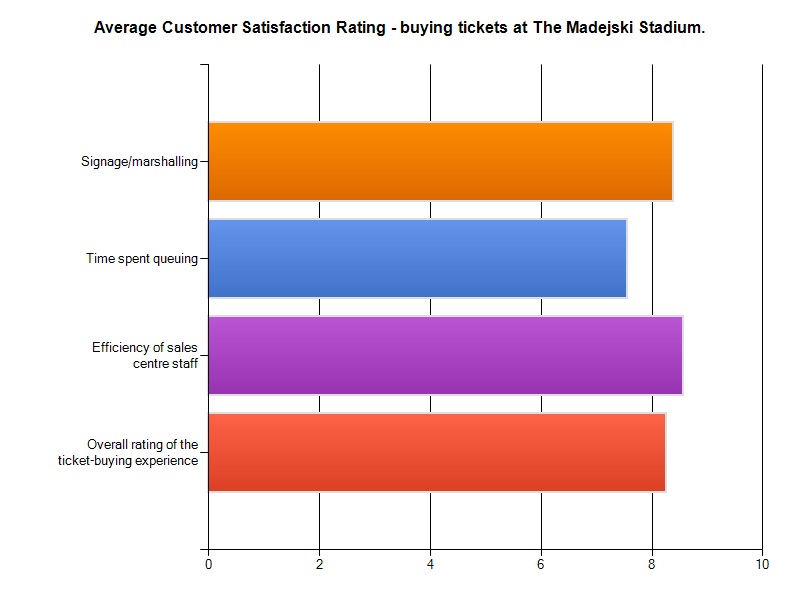 A number of respondents gave us additional comments on their experiences, and as you’d expect from the above ratings, the vast majority of these were positive comments, although a few had suggestions on how the system could have been improved.  A representative sample of these comments is given below.

So the club is to be congratulated on what seems to have been a well-organised and relatively painless experience – especially for those of us who remember queuing all the way around the stadium hours in order to get tickets for previous play-off finals.

But tomorrow we’ll look at the experiences of those who bought over the phone from TicketZone.  That and the stories of those who purchased over the internet make for very different – and very interesting – reading.