Yesterday we looked at the experiences of those who bought play-off final tickets in person at the Madejski Stadium, as reported to The Tilehurst End in the survey we ran in the weeks before the final. Those experiences were almost universally positive praising the whole ticket-buying process and especially the efficiency of Sales Centre staff.

Today, in the second part of this four-part series, we look at the experiences of those who purchased tickets by phone from the ticketing agency TicketZone. And if you’re wondering what the other two parts are, tomorrow we’ll look at those who purchased tickets from Ticketzone over the internet, and then we’ll tie these three strands together with an analysis of the whole tickets system, how it came about and what we’re doing with the survey results.

For those of you with short memories – or who have deliberately blotted out anything to do with the play-off finals – telephone bookings weren’t available through the Reading FC Sales Centre, but instead were handled through an external agency TicketZone.  TicketZone also handled all internet bookings - but more of that tomorrow.

In a similar way to those whose results we summarised yesterday, we asked all those who’d purchased tickets over the phone – 18.7% of our survey sample - to tell us when they purchased their tickets,  how long the transaction had taken them, and we also asked them to give us a rating out of 10 for each of a number of factors relevant to this method of purchasing
tickets.  We also welcomed free-form comments telling us about their experience.

And the results we got were again very consistent – it seems that the majority of those buying by phone had a torrid and time-consuming experience purchasing tickets this way, but when they did manage to speak to a ticket-agent these were knowledgeable and very helpful, and the transaction was smooth from that point onwards.

The time spent to purchase tickets over the phone was, on average, much longer than spent buying tickets in person.  Only 9.3% reported a time of under 15 minutes, with 11.6% reporting a time between 15-30 minutes, and 23.3% reporting a time between 31 minutes to 1 hour.  The most frequent response was between 1-2 hours, experienced by 25.6% of our sample.  In addition, 16.3% experienced a total purchase time of over 3 hours.  As you’d except these highest times were at the peak selling times early on early on the Thursday and Saturday when tickets first went on sale to season-ticket holders and member card holders.  Please bear in mind that these total transaction times don’t necessarily mean someone was holding on the phone all that time – this includes time spent redialling trying to get into the phone queue or not being able to get through to Ticketzone at all. 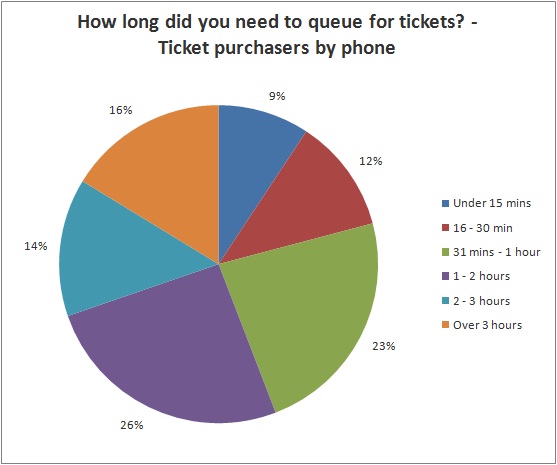 Customer satisfaction ratings given by our respondents tell a very interesting and consistent story too.   37.2% of our sample rated “Ease of getting through” as “Unacceptable”, and another 25.6% rated this as “Bad” or  worse, whilst only 16.1%  rated this as “Good” or better.  The average satisfaction score for this is a lowly 3.33 out of 10.

Very Similar ratings were given to “Time spent queuing/on-hold”, which 16.7% rated as “Unacceptable” and 46.6% rated as “Bad” or worse.  Only 18.6% rated this as “good”, and in fact no-one gave a satisfaction rating of more than 8, meaning that the average satisfaction score out of 10 was just 3.74.

There’s a massive change in responses when it came to rating “Efficiency of Ticketzone ticket staff”.  In this, only 2.3% of our sample rated this as less than 5 out of 10, but 32.6% gave them top marks as “Superb”.  The average customer satisfaction score of 8.51 is actually higher than any of the impressive marks gained by Reading FC's own sales process, discussed yesterday.

This high mark for the efficiency of staff barely rescued the  Overall Customer Satisfaction rating, though, which was 4.35 out of 10 – with a much wider spread of responses, although 14.0% rated this as  "Unacceptable” and 27.9% rated as it as “Bad” or worse, whilst only 23.3% rated it as “Good” or better. 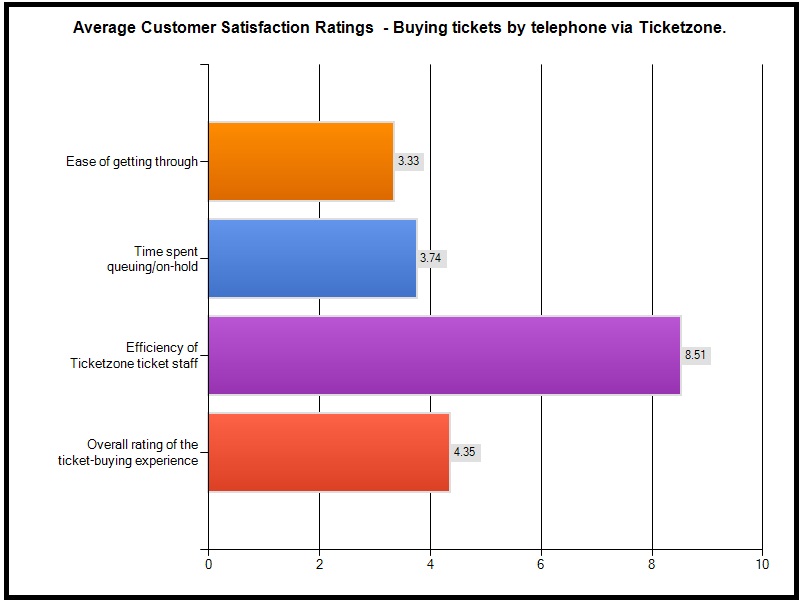 Again, we had a number of additional comments from respondents, and a representative sample of these is given below (NB The Tilehurst End does not take responsibility for any of the grammar or spelling mistakes in these!)

Looking at all these scores and the responses, it’s clear that TicketZone has great staff, who will handle your ticket purchase quickly and efficiently - but it’s just too damn difficult to get to actually talk to one!

Tomorrow we’ll move on and look at the experiences of those who bought over the internet from TicketZone.  This is easily the purchase method which has created the most discussion and the most comments – and which has raised the highest level of fury amongst Reading supporters.