Where Do We Point A Finger? - A Take On The Matt Mills Transfer

Share All sharing options for: Where Do We Point A Finger? - A Take On The Matt Mills Transfer 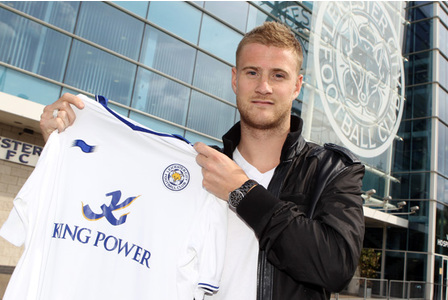 (Courtesy This Is Leicester)

When the final whistle blew at Wembley some six weeks ago, I fully expected one player to leave the club for around 5 million pounds, but if you'd have told me that it would be Matt Mills, I'd have asked where you were drinking pre-match and how cheap was the beer.....

I'd have suggested you were drinking/taking even stronger stuff if you'd told me the same thing 15 months ago when a certain central defender caused uproar amongst a group of fans for giving them the middle finger and followed it up weeks later with a needless red card at Ipswich to all but end our play-off hopes.

However, yesterday Matt Mills' transfer to Championship rivals Leicester City was confirmed, with a fee reported to be £4.5 million rising to £5.5m. The initial reaction from Reading fans has been mixed, with some players angry and the player, others frustrated at the club's management and others praising Nick Hammond for getting maximum value for the player.

Below I'll be giving my take on the whole saga and trying to figure out what might be next.

To me there are several key parts to any move that you need to look at before you can make a judgement and so I'll break my thoughts down along those lines.

Are Reading better off without Mills?

Take away the financial considerations and the only answer to this question is no. Mills was one of only three specialist centre-backs left at the club and his departure means we only have youngsters Alex Pearce and Sean Morrison left at the Madejski. While Ian Harte, Brynjar Gunnarsson and Andy Griffin can all play the position, it's a far from ideal situation going forward.

On the other hand, I can't say I've ever been Mills' biggest fan. While his commitment and determination can never be questioned (on the pitch at least...) his distribution and temperament have been liabilities in the past and I can't say I noticed a massive upturn in our performances after he returned from injury towards the end of the season and replaced Ivar Ingimarsson.

Discipline wise Mills has received 19 bookings and 3 red cards over the past two seasons and a record like that is hardly great from someone who's supposed to be setting an example as our skipper. 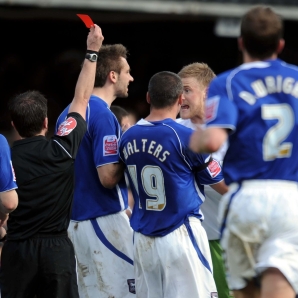 However the stats also make it  hard to dispute Mills role in our success last season. Our captain featured 38 times in 2010/11 and we were beaten just 10 times in that spell. (Interestingly though, we failed to lose a game in the 8 games without the central defender, winning five)

Stats and my personal opinions count for little though because the very fact that Brian McDermott made Mills captain and played him at every opportunity showed just how much he was valued by our manager and right now we're certainly weaker without him.

This is perhaps the one area where Reading fans are all united in their frustrations. For our captain to join a team who finished below us in the Championship last season, with gates of only around 4,000 more and is only 2 hours away from Reading is very frustrating. Had Mills gone to say Newcastle or Middlesbrough when they were relegated you might have understood, or if he was moving to be closer to his family if they lived up North near Leeds or Middlesbrough you might have had more sympathy, but on paper this just doesn't make much sense for a player who was settled in the South.

The conclusion made by many fans has been that the former Man City youngster is going for the money but bear in mind that Reading were reportedly ready to offer Mills a significant pay rise to stay at a club he was comfortable at so it can't all be down to cash.

Mills was born in Leicester so going 'home' is a lure, there's also the fact that his current girlfriend is an actress working around the country, so being in the centre of the country is also beneficial.

It's also possible that the defender just simply views Leicester as a better place to achieve his career goals. The Foxes have a big name manager who has been backed financially by the board and is assembling a team more than capable of going on a promotion push.

On the other hand Reading are suffering a play-off final hangover and are facing up to losing Shane Long and perhaps Jimmy Kebe, to go along with the departures of Zurab Khizanishvili, Ivar Ingimarsson and Glyfi Sigurdsson last August.

Leicester have also historically had more success than Reading and a larger fanbase so there are arguments to be made that he is making a step up, even if that step up is smaller then we'd like.

Also before we start slating a player, lets look at a transfer from recent history.

That player was Jobi McAnuff, who left Watford to join Brendan Rodgers at Reading for £800k. Yet I don't hear people slating McAnuff as a money grabber or slating him for a lack of ambition. So perhaps certain fans should keep quiet about slating players for 'sideways' moves.

It's also worth remembering that Mills himself has already moved across the division once, leaving Doncaster Rovers for the Madejski Stadium two summers ago. Again The jump between Donny and Reading may in some opinions be more pronounced but it again suggests we don't have the right to gripe that one of our players has gone across the divisions when we've seen several transfers of that nature go in our favour. 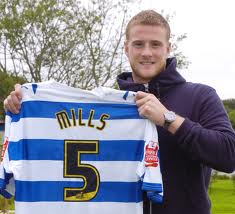 Mills moved across The Championship to join Reading in 2009

This also isn't the first time we've sold across the division to Leicester. After our last Wembley defeat Scott Taylor went to join Mark McGhee at Filbert Street. Meanwhile another central defender and former captain Ady Williams moved across Division One to join Wolves from the Royals a year later.

So am I happy about Mills choice of clubs? Probably not but I can appreciate the reasons for it.

If we feel hard done by for Mills going across the division then there's less griping about the amount of money we made. To receive over £5 million for a defender who has never played regular Premier League football and who has just one year left on his deal is a tremendous piece of business for the football club and shows a profit of around 2.5 to 3 million in the space of just two seasons.

However I don't think I'm alone in feeling slightly cheesed off that Leicester have the £5 million to spend in the first place. Such a fee is an obscene amount for a second tier club, particularly one who drew under 25,000 supporters on average last season and a club who aren't receiving parachute payments. I make no judgements on where the money has come from, or the club's right to spend it but it's still disappointing to know that such a fee is nearly twice our record spend, and covers nearly all of our transfer outgoings in the past three seasons.

Regardless, this transfer has given Brian McDermott a sizeable warchest, one that looks certain to be bolstered even further by the sale of Shane Long. Not only will McDermott have a large chunk of thetransfer fee to spend, it also frees up money in the wage budget, a budget that was also set to include a pay rise for Mills.

The timing of the move is also very much in our favour. In past transfer windows we've been forced to wait until the end of transfer windows to see players such as Nicky Shorey, Stephen Hunt, Andre Bikey and Gylfi Sigurdsson be sold, a fact that has left our managers scrambling for signings and forced to pay, or walk away from, inflated prices and first choice targets.

This time around there is still roughly seven weeks left of the transfer window and the funds not only allow us to pull the trigger on signing a defensive replacement, we'll also now be able to commit to signing players in other areas, rather then waiting for the expected departure of Shane Long.

We've been linked with Colchester's Magnus Okuonghae, a defender that certainly fits the 'Reading mould' of young hungry and keen to test himself at a higher level. However one thing the club has always done is to keep its dealings out of the public eye and so I'm happy knowing that the club is working away behind the scenes.

So financially this deal is one of the best the club has ever done, trading a player at his absolute peak value and at a time that gives the club ample time to get a replacement.

I'm not overly bothered about this move to be honest. While it's disappointing to see a club captain leave for a divisional rival I can understand his motivations and put in the same position I'd seriously consider it myself. However I still think Reading have got by far the better end out of this deal and even if just half of the transfer fee is made available for transfers I'd bank on McDermott making sure the squad as a whole gets a lot better. The final judgement on the transfer can't be made today, but over the months and years that follow but as a betting man, my money's on Reading 'winning' it.

Finally I'll get one thing off my chest...  I understand that some fans are frustrated at this move, angry even. It's good to see that we have passionate fans who care about the club but honestly some of the abuse directed towards Matt Mills' twitter account has been out of order. Whether we like it or not Mills has to do what he thinks is best for his career and for his family and I doubt you'd appreciate a diatribe of internet abuse if he decided to slag off your career choices. Thankfully those people have been in the minority and I'm sure the former Donny man would have appreciated the numerous messages of support he received from the majority of Royals fans yesterday.

So anyway, Matt thanks for the memories and good luck for the future. From your one fingered salute to your moment of madness at Ipswich, your goal at Wembley or your dramatic goal saving clearance and winner at The Walkers/King Power you've certainly made watching Reading a bit more interesting so all the best.