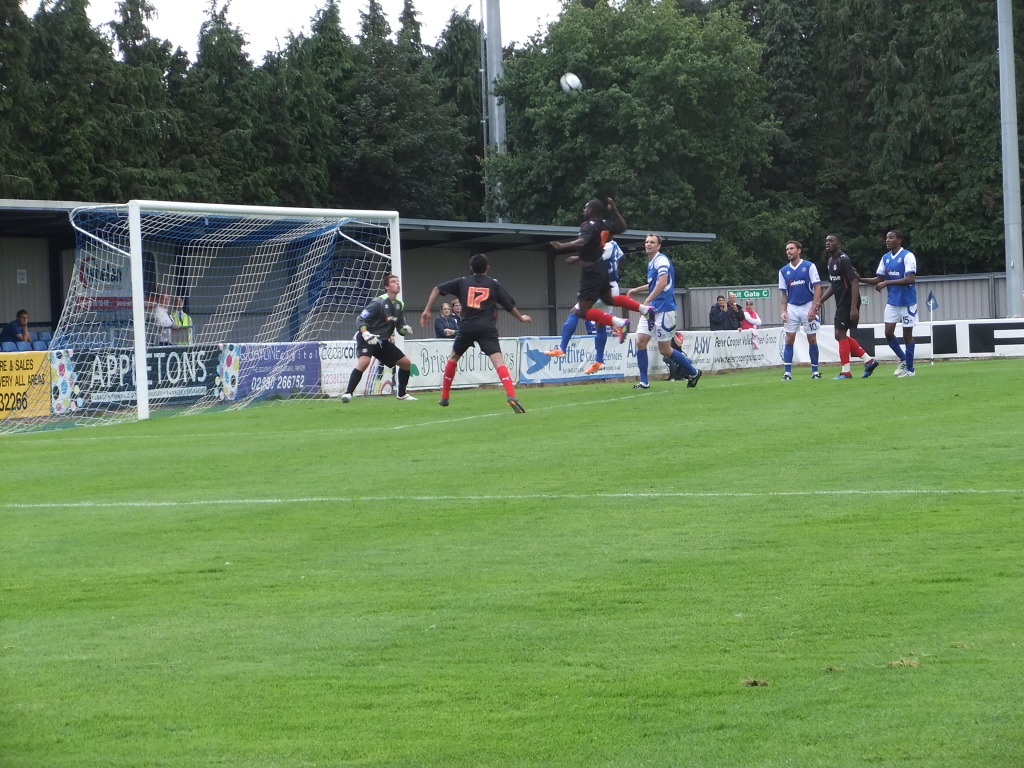 40 days later, 40 days since Wembley heartbreak, The Royals were back in action. It was a stark contrast from just over a month ago, where a brave Reading side saw their Premier League dreams shattered in front of a crowd of just under 90,000. Today, a young Reading team went down 3-2 to Blue Square South side Eastleigh, in front of just over 500 people.

You would think it would be difficult to see any similarities between those two matches, with no players from the Play-Off final featuring for the Reading XI as well as the attendance difference, the two matches seem worlds apart. However, just like that fateful day in May, Reading were undone by three quick fire goals in the first-half, as Eastleigh tore through the Reading defence with their 3 goals coming within a disastrous 13 minute period.

Apart from that period, the young Royals side looked in control, and rarely looked troubled. With a different XI each side of half-time, there were plenty of players in action, all looking to impress the onlooking Brian McDermott and Nicky Hammond. If the Reading manager was looking for any young players who could feature in his First Team this season, he would have no doubt seen some impressive performances by a number of youngsters. In the 1st half Jacob Walcott led the front line well with plenty of pace and trickery causing problems for the Eastleigh defence, while John Goddard and Frankie Raymond looked assured at full-back. Natural centre-midfielder Goddard particularly impressing at Right-Back, solid defensively as well as getting forward with confidence, always looking good on the ball.

It was a decent first half from the Royals, going close early on with midfielder Lawson D'Ath failing to connect with Jordan Obita's cross and Michail Antonio being denied by the Eastleigh goalkeeper after being put through by Walcott.

However it wasn't too long before the non-league defence was breached. With 20 minutes gone Antonio latched onto Frankie Raymond's through ball, and found fellow winger Jordan Obita in the area who made no mistake from close range. Obita, who made his debut for Reading aged just 16 against Torquay in last season's Carling Cup as well as making the bench for a league game against Barnsley, had a lively game and will hope his goal and performance helped convince McDermott he could play a part for the Royals this season. However at times he did look slightly lightweight and could maybe do with some time on loan in order to gain experience. Something, at 17 years of age, he has little of.

Following Obita's goal (which was mistakenly announced as Charlie Lossaso's by the stadium announcer), most of the decent number of travelling Reading fans would have thought it would of been plain sailing from then on. However Eastleigh had other ideas, and it took only a minute for the Blue Square South side to equalise. Centre-back Sean Morrison giving away a cheap free-kick on the edge of the area, and following a series of deflections, the ball fell to Andy Forbes who tapped home to level the scores.

Then, just 4 minutes later, they were ahead. Left-back Raymond was caught out of position by Liam Davis, who crossed to Andy White who headed past Simon Locke to give Eastleigh a 2-1 lead. Some Reading fans may recognise the name, as White was at Reading throughout his academy days, before being released at the end of the 2009/10 season. He spent last season at Gillingham but following just a couple of first-team appearances, he was released yet again. He is currently on trial at Eastleigh.

While Reading came close to an equaliser, Sean Morrison having a header cleared off the line following an Obita corner, they found themselves further behind on 36 minutes. As a long ball was played over the top of the Reading defence, Morrison was outpaced and out-strengthed by striker Jamie Slabber, who scored 25 goals last season, and the former England youth international striker burst away from the his man, and fired past Locke just like he did when his Eastleigh side met Basingstoke last season.

The score remained 3-1 until half-time, and Reading made 10 changes for the second half with just goalkeeper Locke remaining from the first-half.
From the second-half team, the most impressive were undoubtedly Under-20 internationals Ethan Gage and Ryan Edwards, while Gozie Ugwu and Jake Taylor looked handy throughout the 45 minutes. 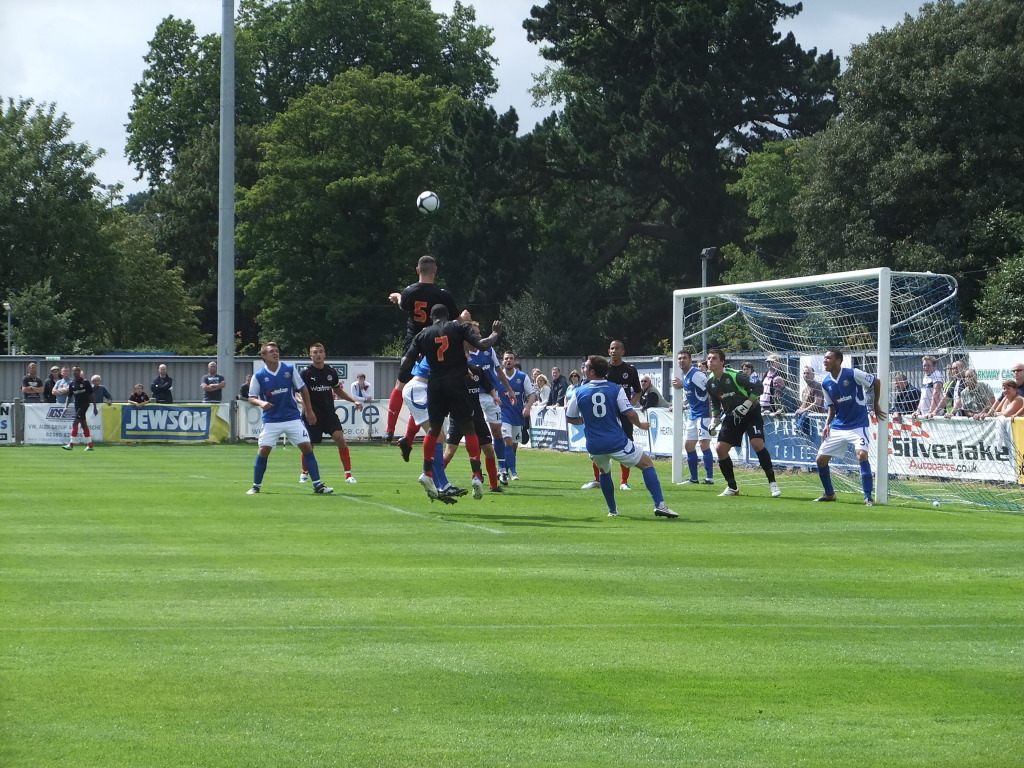 Canadian Gage looked tidy in the centre of midfield, winning possession often and always looking calm on the ball. With a performance like this you feel there may be a chance he could be involved with the first-team this season.
Australian Ryan Edwards, youngest of the two brothers at 17 years old, was a pleasant surprise. Taking on and beating players out wide on the left, with his pace and trickery showing why he recently signed a four-year deal at Reading. While it may be a bit early to suggest he will be featuring in the Championship this season, he is no doubt one to look out for in the future.

Jake Taylor and Gozie Ugwu also impressed, and it was those two who linked up for Reading's second goal. Welshman Taylor did superbly on the left wing to beat his man, and his cross was turned in by striker Ugwu to pull Reading within one goal at 3-2. Ugwu, who signed his first professional contract in the summer, had missed an earlier chance when put one-on-one, but made no mistake this time round and took his goal on 51 minutes.

It seemed as though Reading would push on after that goal and turn the game back in their favour, but the goal never came. They had their chances though. Bignall shot wide inside the area after good work from Marcus Williams and Ugwu have had his second when he was brilliantly put through by Taylor, only for his shot to be saved low by the Eastleigh goalkeeper.

Eastleigh failed to get into game during the second half, although Troy Powell-Quarry forced a good save from substitute 'keeper Dean Santangelo from long range. Santangelo, aged 17, came on for Locke on 61 minutes, and looked comfortable throughout his time during the match. Proving once again the strength in depth in the Reading goalkeeping department.

Then with just 10 minutes left on the clock, the Royals had their best chance to equalise. Bignall went through on goal following a terrific through ball from centre midfielder Cameron Edwards, but his attempt to chip the 'keeper was too weak, and an Eastleigh defender was able to beat the ball to the goal and clear it off the line.

The Blue Square South side in the end managed to hang on for the remainder of the match, and will be delighted to have got the win over good opposition.
For the young Reading side, the result should not disappoint them too much, as they will all be pleased to have got a run-out following the summer break. A few of the players involved may now look at a possible trip to Slovenia with the first team, while those not involved with the tour will be playing again on Tuesday night, away to Swindon Supermarine, who reached the 2nd Round of the FA Cup last season.

Despite the positives, there were some disappointing performances. Last season's first team players Antonio and Marcus Williams were very poor, Antonio losing the ball often, and Marcus was regularly beaten by the Eastleigh wingers. The other Williams, who captained the side didn't fare much better either. Despite a warm reception on his return to the club where he was signed, he didn't receive much service and failed to create many opportunities.
Lawson D'Ath was quiet, while Morrison looked shaky at the back. Bignall was another disappointment, and you feel with the likes of Ugwu and Walcott coming through his days at the Madejski are numbered.

An enjoyable day however, and we look forward to many more friendlies this pre-season.

(Eds note: Thanks to HNA? posted Rev Algenon Stickleback H for the pictures, you can see more of his photos at http://stadiumsandcities.wordpress.com/)