Share All sharing options for: The Ian Harte Conundrum

If ever there’s been a player who defies convention, it has to be Ian Harte. Last season’s second top goalscorer was something of a surprise signing last August when he arrived for £70k from League One side Carlisle United but one that proved to be very intelligent and well thought out. In some ways you could say he was the archetypal Reading signing; professional but cheap and perhaps with something to prove. That was last season though and I think it now begs the question, where do we go from here and is Harte a viable option for the coming season?

There’s no denying Harte’s pedigree. He was part of the remarkable Leeds United team of the turn of century and was an automatic starter in the side that reached the semi-finals of the Champions League and in fact scored in their quarter final victory over Deportivo La Coruna. He also played every minute of Ireland’s qualifying campaign and subsequent appearance at the World Cup in Japan & Korea and has racked up 64 caps for his country. All this leaves you wondering though; why was this player at the age of only 31, knocking about in the third tier of English football? The answer is a succession of injuries and poor career moves.

In what still seems a slightly bizarre move, Harte left Leeds in 2004 just as the extent of the financial mismanagement was becoming clear. He went to join Spanish side Levante who had just gained promotion to La Liga. His season started well, scoring their first goal back in the top flight but a groin injury cut short his season and he was unable to prevent the side slipping straight back to the Segunda Division. The next season was injury free and saw promotion back to the top flight but again injury got the better of Harte and in 2007 he had his contract terminated.

This is where Harte’s problems really began. After three years out of the English game and with the only injury free of those spent in the second tier of Spanish football, there wasn’t a massive queue of suitors for the Irishman. Compatriot Roy Keane made him part of his Sunderland revolution (which saw him bring in an incredible 21 players including a certain Greg Halford) but unfortunately for Harte he was as successful as most of those and after only 3 starts, he found himself a free agent again. A succession of trials followed before Blackpool took a punt and gave him a monthly contract but that only last two months and four games.

In 2009 He finally settled at Carlisle and after helping the Cumbrians avoid relegation on the last day of the season he was given a permanent deal. For the first time in four years Harte was playing regularly and he repaid Greg Abbott’s faith in him by finishing the season as Carlisle’s top scorer with 18 goals. A remarkable figure given that he’d spent most of the season playing in the centre of defence. His efforts earned him a place in the League One team of the year before his slightly surprising move up a division and down south to Reading.

It seemed odd at the time. We’d just lost Gylfi Sigurdsson to Hoffenheim for a club record £7m and here we were paying out £70k for a veteran full back to supplement the loan acquisition of Zurab Khizinashvili, another defender. Plus the fact that in Marcus Williams and Chris Armstrong we already had two left backs at the club with Julian Kelly showing promise in the reserves. Of course we know now that there were issues we were unaware of with Armstrong and Williams never really looked the part but even if that hadn’t been the case, I still believe Harte would have arrived. McDermott knew his man and rather than coming in to be an out and out left back, as ridiculous as this may sound, Harte was signed to replace Sigurdsson.

Think about it. When Sigurdsson left the club the attacking options looked pretty bare. Shane Long was some way off the form he would go on to show, Noel Hunt’s injury record wasn’t the greatest and Simon Church was very much unproven. Into that came an aging full back. It was a masterstroke and one that I don’t believe McDermott has had enough credit for. Rather than going out and splashing the cash on a new striker (as many fans wanted) he placed his faith in his existing players and bought a man who could, in part, replicate Sigurdsson. The Icelander is unquestionably world class at scoring from dead balls but if anything, Harte is even better. Both rank comfortably higher than other overhyped free kick takers like David Beckham, Cristiano Ronaldo and Roberto Carlos. At the end of the season Harte finished second top scorer with 11 goals, most of which came from free kicks. In Sigurdsson Reading lost a player who was capable of winning games from nothing but they gained someone who was just as capable of doing the same. It’s also worth pointing out that over the course of the season Reading didn’t lose a single game in which Harte scored.

What’s more, Harte fits into the ‘Reading way’. Despite his career at Leeds he maintains a reputation of being an honest, hardworking pro and after such a long period out of the game he clearly has the desire and the drive to keep going and continue to improve. As a club, Reading value these qualities very highly and has been reflected in players like Bryjnar Gunnarsson, Andy Griffin, Ivar Ingimarsson and of course Graeme Murty. It also helps that he’s the most comfortable of all the defenders on the ball and is one of the best passers at the club; a legacy of playing at such a high level. My goal of the season for last year was Shane Long’s first against Middlesbrough as much for Harte’s staggeringly good cross as Long’s header.

Whilst the signing of Harte helped maintain some of what Sigurdsson brought to the team and provided minimal disruption, it did come at a slight price. Even when he was in his pomp at Leeds there was always that lingering doubt over his abilities as a defender. Harte has never been the quickest and in the full back position that fact can sometimes be cruelly exposed. There have been a number of occasions when Reading have conceded directly as a result of Harte’s lack of pace (Routledge for QPR and Martin for Norwich spring immediately to mind) and you have to wonder if a pacier man may have been able to prevent at least one of Swansea’s goals at Wembley.

That’s the dilemma with Harte. You know he can guarantee you goals but you also know he will cost you them as well. However, without trawling through all the goals from last year and doing some intense research into goals scored and conceded, my gut tells me that he finished in the black for the season. Certainly I remember more highs than lows. 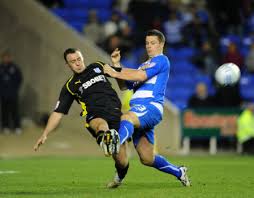 This coming season is going to be an interesting one for Harte. I think his days at left back could be numbered. He’s not getting any quicker and the competition from Cummings and Williams may be too much. Added to which you have to wonder if the old injury problems might rear their ugly head again. I might have a solution though. With only one recognized first team centre back at the club, maybe is time to move Harte into the middle. Alex Pearce could benefit from having his experience there and from not having to be the senior partner at such an important stage in his development. Moreover, in losing Matt Mills and Zurab Khizinashvili, we have lost two ball playing defenders (granted one more so than the other) and that is a role Harte could be comfortable in filling.

Harte’s lack of pace would not be so exposed in the middle either. What’s more, a career of being slow has meant that his positional sense is actually his biggest strength as a defender and he’s proved himself more than capable in the air. He may not fit everyone’s idea of a perfect centre back but Ivar Ingimarsson showed that you don’t have to be the tallest, quickest or strongest to be a quality defender. What you do need is to have good positioning, be decent in the air and as hard as nails. Should suit Harte down to the ground and let’s not forget the success he had playing there for Carlisle.

McDermott has hinted recently that he isn’t keen on the idea of Harte playing centre half and that he will only be doing so in the friendlies until someone else comes in. Granted he won’t be under the stiffest test of his career in Slovenia but it will be interesting if he performs well, whether McDermott may rethink a little bit. He will still want to bring someone else in regardless, of that I’m sure but might we see him less at left back this year?

Either way Ian Harte is inevitably going to be a player that is looked at as one that will need to be replaced in the coming seasons but at 33 he is hardly over the hill and still has a good few years left in him. Until Reading find another player who can consistently deliver 10 goals plus a year to supplement Shane Long, it is important Harte remains in the side, especially when the midfield contributes so little in the way of goals and the other forwards are so erratic. What should prove interesting is how McDermott accommodates him and if he will be able to maintain a place in the starting XI. Of one thing I am certain, as frustrating as he can be defensively, it will all be forgiven of he carries on smashing in the goals.