Sonko is a Spareman! - A look at the possible return of a former Reading hero

Share All sharing options for: Sonko is a Spareman! - A look at the possible return of a former Reading hero 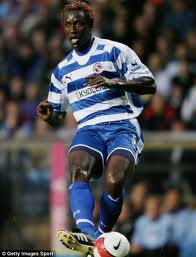 The heroic return of one Ibrahima Sonko should be seen as a decision taken by the club out of necessity rather than nostalgia.

For all his bravado and cult-status, Reading fans should remember that the defender is now a shadow of the one we saw breaking all kinds of records during the 106 season.

Sonko was the brick, with Ivar Ingimarsson being the foundations, of the strong defensive unit that blocked teams from getting any look in. His full face block against Ipswich Town lives long in Reading folk-law as well as his six-pack.... after all the boy is buff!

He was playing well and in the Premier League he looked good, except for perhaps his sending off against Aston Villa, but when he was injured against Sheffield United in first season of Premier League something changed. 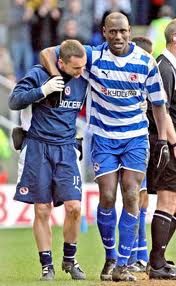 It appeared the Senegalese defender never fully recovered the confidence he carried for so long, he now had to work hard to get back into the side and when he did mistakes started to creep in more often and the acquisition of similar types of defender such as Michael Duberry did anything to boost his confidence.

Sonko left the club in August 2008, signed by Stoke boss Tony Pulis seemingly because he was tall and Pulis thought he would be an asset for their long throw game. However, without that confidence he'd built up at Reading, he was massively out of his depth. The defender was used sparingly throughout his time with the Potters and Tony Pulis never fully backed him, and who can blame him. Sonko was chucked in the deep end and was left looking rather foolish.

'Superman' often left fans biting their fingers off in trepidation and the situation didn’t help at Reading when Sir Steve Coppell elected Andre Bikey and Michael Duberry as his ideal centre back pairing when Sonko left!  I think I lost a hand and an arm.

Leaving Reading has done little for many other players from the 106 team and Sonko is no different. His impact at other clubs has been minimal, with disappointing loan spells at Hull City and Portsmouth doing nothing to boost his appeal or confidence and he now finds himself a free agent less than 3 years after a £3 million pound move. 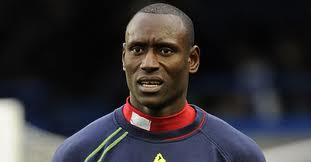 To me Sonko's ‘homecoming’ should be taken with a pitch of salt but his presence and experience could be an asset especially with the young centre backs we have left at the club after the departures of Matt Mills, Ivar Ingimarsson and Zurab Khizanishvili.

In hindsight, perhaps it was a mistake to get rid of Ivar as quickly as we did. Frustratingly, he could have been the man who’s experience could have been counted on, he is after all, a much more composed, sensible defender than Sonko. Zurab wanted to depart and venture pastures new but Ivar would have stayed. He may have desired more first team action but his presence will now be sorely missed.

Brian McDermott has said that the they're also taking a look at another central defender as well as Sonko and Reading fans will have to hope that the incoming centre-half is experienced and have certain leadership qualities about him.

There may have been a slightly sentimental set of reasons to take another look at Ibrahima again in training but who knows, this may inject the confidence that he needs to get his ‘hero status’ back. Even if he's not ready to go into the first eleven maybe a place on the bench would help other defenders develop  and who knows if he gets his confidence, Reading may have a little gem on their hands.

The boy needs to be loved.