Share All sharing options for: Leicester 0-2 Reading FC - The Royals & Hunt down Mills 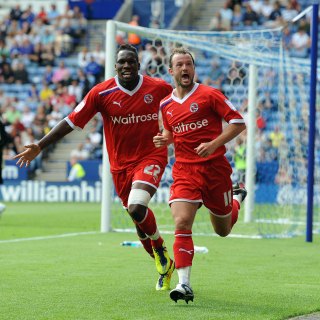 Well that shows how much we know doesn't it? I at least got the number of goals right for Reading... but what a result and I'm delighted to be proved wrong!

Having not been able to be at or even listen to the game, another Loyal Royal, Steve Guscott, volunteered to share his thoughts on the game and you can read his report below the jump.

After an opening day draw at home to Millwall, life without Shane Long started in earnest at the King Power Stadium against Sven Goran Erikson’s big spending Leicester. Of course Matt Mills lined up at the heart of the foxes defence, to add some extra spice to the game, and he was roundly booed by the travelling supporters, whilst the home fans were quick to gloat about their new found wealth – “We’re Leicester City and we’re buying the league” they sung.

With a game saving double against Millwall, Mathieu Manset was promoted from the bench to start alongside Noel Hunt in place of the departed number 9. You might have expected the championship favourites to dominate possession on their own patch but it was quite the opposite as the Royals patient build up saw a number of half chances created for the likes of Manset and Mikele Leigertwood.

That was in contrast to Leicester who preferred to pass the ball to Mills who attempted long ball after long ball, often finding the stand or the feet of a Reading player. Every touch was greeted with loud booing for our former captain, followed by much hilarity when he lost possession as quickly as he had gained it.

Manset looked desperate to prove he can fill the void left upfront and he was running Mills ragged and the best chance of the game came when he picked the ball up with his back to goal, turned with relative ease unchallenged and raced towards goal. Unfortunately his left footed drive went narrowly wide but he quickly turned provider, setting up McAnuff only for Kasper Schmeichel to do well to deny the Royals captain.

Despite dominating the opening period, Leicester did finish the half by putting a bit of pressure on the Royals defence and that allowed us to see the very best of our new defender Bongani Khumalo. Jeff Schlupp found some space in the area on the right and sent a shot towards goal but the South African defender launched himself bravely in front of it with a terrific block.

Brian McDermott would have been delighted with his side at the break as we had done everything but score, however within minutes of the restart it looked like we were going to fall behind when we lost possession cheaply. David Nugent was played in and his effort looked set to nestle in the bottom corner but somehow it hit the inside of the post and bounced back out, allowing the Royals to clear. It was a massive let off but the ball was quickly back at the other end with another great chance. Jimmy Kebe was played in on the right hand side of the area, from the impressive Jem Karacan, but he was closed down well by the onrushing keeper and could only hit a weak effort straight at the Leicester number 1.

We didn’t have to wait too much longer for the opening goal though as we won a corner on the Leicester right. Ian Harte delivered a great ball in and Noel Hunt ran unmarked to meet it with a great header that went through a number of players on the line and into the back of the net. The striker raced to celebrate in front of the travelling supporters. With Long gone it was time for Hunt to start proving that he was the number one striker at the club and he more than delivered with a great performance and a well deserved goal.

We were dealt a blow when Manset went down injured and had to be replaced by Hal Robson Kanu, although to be fair it was probably a change we were going to make sooner rather than later anyway as the Beast had picked up a first half booking and was still charging around like a mad man!

We never looked in danger of letting that lead slip and it was the sub who made the game safe in the last minute. Andy Griffin took a throw in on the right hand side, Kebe held the ball up well in the area and laid it off to Robson Kanu who curled an effort that went in off the underside of the bar. You could see his teammates were delighted for him and he was quickly rugby tackled by Karacan in the celebrations.

“Millsy, Millsy what’s the score” rang out from the travelling support who were delighted to have seen the side secure an impressive three points. Every one of the players put in a top performance and we were as good, if not better, than we had been at any point last season.

Since Long’s departure I have heard a lot of negativity from certain sections of fans who were adamant they would be watching their side in a relegation battle unless we went out and spent the Long money on a new striker, I disagree completely as I feel there is more than enough to challenge with what we already have. We coped when Kevin Doyle left, we evolved and Gylfi Sigurdsson stepped up and we coped when he departed 12 months later, we evolved and Shane Long stepped up. There are a number of players in this squad who are capable of stepping up now, not least Manset. He has come in for a lot of stick from fans but he has clearly got himself fit over the summer and looks to be improving game by game. He saved us last week, and today he put in a complete strikers performance, holding the ball up as he often does but it was his work rate that impressed me most. He was often running the channels as you would so often see Long doing on a regular basis, and his skill and movement created a few chances for himself and also for others.

At the other end of the field it was pleasing to see Griffin and Harte putting in excellent displays at the back against some very good wingers whilst Pearce and Khumalo look to be growing in confidence together and that pairing has a lot of potential if given time. Federici did nothing wrong and made a few good stops when called upon but he would have been expecting a busier afternoon whilst on the wings Kebe and McAnuff caused problems for John Pantsil and Paul Konchesky who were both playing premier league football last season.

My man of the match though would have to go to Jem Karacan. The midfielder was everywhere, breaking up play and driving the team forward with some good runs forward and he displayed an excellent range of passing.

All in all it had everything a decent away day should, a great win, getting one over on a former player and the Royals faithful in great voice. Bring on Pompey on Tuesday night.

Thanks again to Steve for the report, you can follow him on twitter at @SteveG1871 and if you want to offer your own thoughts on any Royals game then please email us at thetilehurstend@gmail.com or get in touch via twitter @thetilehurstend