Once again, not only did the weekend see the Reading first team in action, it saw plenty of fellow Royal's playing their football elsewhere, as Reading's loanees took to the field for their loan clubs. As always, The Tilehurst End has been watching them carefully, and here is how they got on. 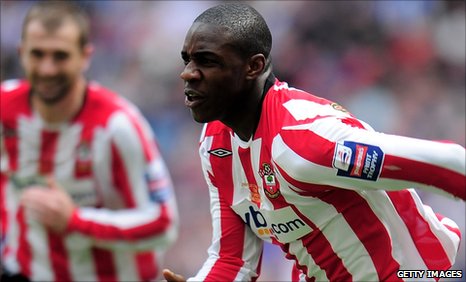 Firstly, although there's been plenty of action on the pitch, the most notable news of the last week has happened off it, with another Royal heading out on loan.
Michail Antonio signed for Colchester Utd of League One on loan yesterday, with the young winger joining the U's for a month, with Colchester boss John Ward hopeful of keeping him longer.
Antonio, 21, has enjoyed past loan experience at Cheltenham although most notably at Southampton, where he enjoyed a whole season playing regularly in League One. Michail made 28 appearances while down at the south coast club and scored 6 goals, including one at Wembley, so will be hoping to have further success as he joins promotion hopefuls Colchester, the club where former Royal David Mooney was top scorer last season while out on loan from Reading.
U's manager John Ward told the official club website, "He is direct and attacking and has all of the right attributes for the way that we play.
"The nice thing is that, although he has been on the edge of getting into a very good Reading team, he has been keen to come here.
"We are pleased to have him here and we will see what's what at the end of the first month. We would like him for longer, but it will be reviewed at the end of the month."
Reading's No.28 (although he will wear No.11 while at Colchester), has made 26 appearances (including 2 league starts at the end of last season) in total for the Royals since joining from non-league Tooting & Mitcham in 2008, scoring once. Despite being a regular on the substitutes bench for Reading last season, as well as seemingly coming very close to breaking into the first-team following a couple of starts in place of the then-injured Jimmy Kebe, Michail's chances this season did seem to be limited following the breakthrough of Hal Robson-Kanu and to a lesser-extent, youngster Jordan Obita. The new 5-subs rule did the young winger no good, and this move to Colchester will be a good chance of first-team football he would have been unlikely to have got at the Madejski.
Colchester, who currently lie 4th in League One, host Charlton this Tuesday night, and there's every chance their new wideman could make his debut.

Speaking of debuts, Jake Taylor came off the Aldershot bench to make his first appearance for the club, but could not prevent them going down 1-0 at home to Northampton Town. Jake came on with 77 minutes gone, but by then it was too late, as the Cobbler's, who incidentally Jake made his Reading debut against, held on for the 3 points.
It will have been double disappointment for the Wales Under-21 midfielder, after missing out on the starting XI as well as the defeat. After being sent down the leagues to get first-team experience, Taylor will be hoping to make a more significant appearance as the Shots take on Torquay tonight.

Over in a different country now, and young Irish defender Carl McHugh played the full 90 as his Dundalk side drew 2-2 away to Drogheda Utd in the League of Ireland Premiership. Dundalk, who currently lie 6th in the League after 26 games, took the lead early on, but had to get another late equaliser (see last week's Loan Report) to salvage a draw against second-bottom Drogheda.
While being part of a defence that conceded two goals may be seen as a disappointment to young Carl, playing another 90 minutes is a big positive, especially at such a young age. The League of Ireland Premiership is a decent level, and Carl has cemented himself comfortably into their starting line-up, having started every game since joining back in July.
Dundalk are next in action of Friday, as they play host to Bray Wanderers.

Back in England now, and striker Nicholas Bignall has received good reports while playing for League One side Exeter since the start of the season. Exeter manager Paul Tisdale called the youngster 'invaluable' while speaking to This is Exeter, saying, "Nicholas has been invaluable to us. We really needed someone to come in and work hard, to be a member of the team, and he has done that.
"He has not got the goal he would have wanted, but he has put a lot of effort in and at times he has given the opposition, especially during the Yeovil game, some real problems.
"At the moment he has contributed and he has been a good team member, which is vitally important when you come to a new club.
"For his benefit I would like to think he can cap it with a goal. I have been very pleased with him."
Bignall's lack of goals is a slight worry, having not scored since 2009 while on loan at Stockport. He has played 26 matches for 6 different clubs since that last goal, and will be desperate to start getting on the scoresheet and keep his place in the Exeter team, ahead of the Grecians Carling Cup game against Liverpool on Wednesday 24th August.
He can't have many complaints however, after nodding a brilliant chance to end the barren run wide as Exeter slumped to a 2-0 defeat to MK Dons on Saturday. His miss can be seen here at 42:05 in.
Exeter take on Bignall's former club Brentford on Tuesday, hoping to get their first league win of the season.

Finally, Reading have two youngsters currently out on loan in the non-league, which started on Saturday. Academy goalkeeper Dean Santangelo is currently first choice in goal at Bromley, and helped ensure they got off to a winning start with a 2-1 defeat of Hampton & Richmond in the Blue Square South. Dean made a couple of saves before Bromley substitute Mike Jones headed in an injury-time winner to give Bromley all 3 points.
Santangelo will be in action again tonight, as they take on Boreham Wood at Hayes Lane.
Frankie Raymond, a first-year professional who made his first senior Reading appearance in the pre-season friendly against Eastleigh, is currently on loan at the club he made his debut at, although was injured as Eastleigh lost 2-0 to Frankie's former club Basingstoke Town. Having spent a good period on loan at Basingstoke last season, Raymond will be hoping for similar success at his new team. They travel to Truro City tonight.

So plenty of Royal's in action this Tuesday night, so when you're not watching/listening/following the first team's match against Portsmouth this evening, make sure you check up how our loanee's clubs are getting on. Who knows, we could see our first goal by a loanee tonight.
We'll have another round up of how they all get on in next week's Loan Report, so make sure you check that out.