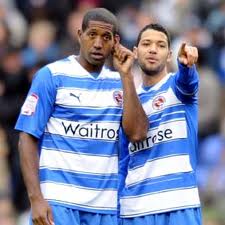 The transfer window has shut, Reading have completed their (season-long at minimum) deals for now; we've seen two International captains and two young Englishmen with very high potential join us.

Khumalo, Gorkss, Joseph Mills and Le Fondre have joined the Royals to make us look like a team that could yet again challenge the play-off places. Sure enough, losing Khizanishvili, Ingimarsson, Mills and Long are big losses but we've replaced them with sensible signings who will keep us battling at the right end of the table (despite our poor start).

Below I will suggest one area of the team that I feel McDermott & co. have failed to address or improve in the past few seasons.

The only area where we failed to address (or even be linked with) is central midfield. Brian Howard has reportedly asked to leave the Royals and this news made me realise that there's something missing from McDermott's armoury - a playmaker. In recent times we've not had many midfielders who would class themselves as playmakers. Players who look to get the ball in space, turn, find a team mate and play the pass. Players who see something in the middle of the field and try to make it happen. The most recent playmaker that we've had has been Marek Matejovsky, and his Reading career wasn't exactly a success. People may argue that Sigurdsson was a playmaker but I see him as an attacking midfielder. He didn't pull the strings as such, he was just such a quality player that we relied on him during his first (and only) season with us.

Brian Howard can be classed as a playmaker, trying to make things happen and attempting ambitious passes but he isn't

The joker in the pack - Howard wants out of Reading

quite up to scratch. Whether that is because of Howard himself or the playing style of Reading is up for debate. He was a great midfielder whilst at Barnsley but his performances in a hooped shirt have by and large failed to impress.

You look at our current first choice midfield partnership in Legs and Karacan, and you see workrate, tackling, tempo and passion. What you don't see is creativity, passing or goals.

I'm not proposing Reading go out and splash the cash on another Matejovsky or Howard - I think it's proven by now that advanced playmakers don't fit into Reading's 4-4-2 formation. I think that McDermott & co. should have a serious think about recruiting a deep-lying playmaker. Someone who contributes to the defensive phase of play but is the man in the middle who not only distributes to the wings (a la Karacan and Legs) but who plays killer balls from a deeper position, who creates things and who could contribute a few goals over the course of a season. Think Tom Huddlestone - defensive, but with a great pass and a terrific shot on him when the time is right. This kind of player isn't in the mould of hustle-and-bustle midfielders such as Karacan and Legs, but he can intercept and win the ball and then contribute to creating further forward.

One of the problems I think about the advanced playmakers we've bought is that it puts too much pressure on the remaining midfielder to cover their backs and protect the back four - especially considering McAnuff and Kebe (or any of our other recent wingers) ever contribute huge amounts to the defensive part of the game. It makes sense that McDermott wants two ball-winning midfielders to allow our wingers and forwards more freedom but does that then result in us being more one-dimensional? The 'win the ball, out to the wings' philosophy can become tiresome and predictable, and when the Royals aren't playing at the top of their game other teams find it easy to stop and press again.

I'm not assaulting McDermott or the way that Reading play - I find it enjoyable and love the tempo of our game. It guarantees excitement even when there are no goals, at least we know Reading will go out and attack. All I'm saying is that with the midfielders we'll be left with if/when Howard leaves - Legs, Karacan, Tabb, Gunnarsson - we have 4 defensive midfielders, one of whom is likely to retire very soon.

I feel that one more creative midfielder who is adept at defending would give us that extra dimension and push us on that one step further.

What do you think? Is it a midfielder that Reading lack to push the club forward, or a striker? Another winger? Leave your comments below or tweet @TheTilehurstEnd or @RoyalHoops with your thoughts.