The Reading FC - Went on to Better Things XI

Share All sharing options for: The Reading FC - Went on to Better Things XI

With Matt Mills and Shane Long both securing big money moves over the summer I thought it would be as good an opportunity as any to take a look back and see which players have left the club and gone on to better things. Given the up and down nature of the club over the last couple of decades it’s probably necessary to define what I mean by ‘better things’. So what I mean is players who have improved their career and/or played at a higher level than they were doing so at Reading. For that reason I’ve ruled out pretty much the entire Premiership side. The likes of Sonko, Shorey, Sidwell, Doyle, Kitson and Hahnemann all effectively stayed at the same level when they left the club and as yet, none of them have really moved up from where we were.

Of all of the players who took the field for Reading at Wembley in 1995 for the playoff final, Shaka was the only one to make any kind of real impact in the top flight. The Trinidadian made over 200 appearances in the Premiership for Newcastle, West Ham and Portsmouth and was also runner-up in the 2006 FA cup final saving Sami Hyypia’s penalty in the shootout. Arguably Reading’s greatest ever goalkeeper and still a cult figure at West Ham, Shaka is now working for ESPN.

Keith Curle’s brief spell with the Royals wasn’t the happiest as he suffered relegation to the old Third Division in 1988 but his performances were enough to secure him a move to FA cup holders Wimbledon. After a couple of impressive years in South London Manchester City splashed out a British record for a defender of £2.5m and within a year he was playing for England and on his way to Denmark for Euro ’92. England, and Curle’s, performances were much derided but it was still a pretty meteoric rise for the defender. He clearly has a thing for blue and white hoops as is currently working as Reading favourite Neil Warnock’s assistant at QPR. 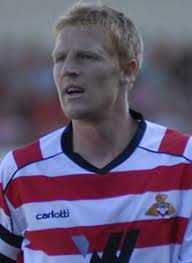 Perhaps the surprise inclusion in my side Lockwood joined the club as a youngster back in 1999. Part of the youth setup at the time he never made it into the first team and in 2001 with the club still struggling to get out of Division Two, he was allowed to leave for non-league Yeovil on a free. Many could have been forgiven that would be the last we’d hear of the centre back but that wasn’t the case. After helping the side to back to back titles he joined Doncaster Rovers in 2006. Lockwood has struggled with injuries throughout his career but he is now an established regular and vice-captain of The Rovers’ team that has become a fixture in the Championship.

Probably Terry Bullivant’s only decent signing when he arrived with the former taxi driver from Barnet in 1997, Linvoy never really had that great with time at the club. Much like Curle nearly a decade before Primus impressed in the side relegated to the third tier but struggled to make it into the side under new boss Tommy Burns. In 2000 he left on a Bosman move to Tony Pulis’ Portsmouth and after initially struggling to make an impact he went on to be a regular in the side that won the 2002/03 Division One title and then in the Premier League. A true legend at Portsmouth he had a stand named after him in 2010, fittingly perhaps before the game against Reading. 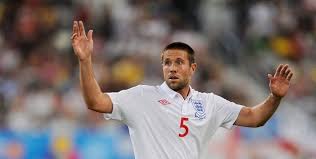 The only loanee in the side Matthew Upson was a class above in the three months he spent at the club after being sent down the M4 to recover from a broken leg. Rarely can a player’s fortunes have been turned around as quickly as they were with the former-Arsenal man. After 6 years of flitting in and out of the Gunners’ side Upson’s time at Reading convinced Premiership Birmingham City to buy him for £3m. On his departure from the club manager Alan Pardew commented that he would one day play for England, what he wasn’t to know was that it would only take 5 months when he made his debut against Switzerland. Upson is now playing for Stoke City having joined on a free from West Ham. 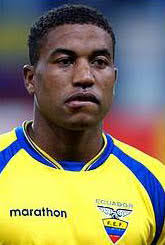 The ever dependable Ulises de la Cruz was always a safe pair of hands for Reading but when he was released in 2008 many assumed he would simply retire back in Ecuador and continue with his charity work. They were half right. Whilst he remains committed to his charity work, he did not retire. Instead he has played his part in the extraordinary success of LDU Quito. In 2008 they became the first Ecuadorian side in history to win the Copa Libertadores (the South American Champions League) and with de la Cruz in the side they have also won the Ecuadorian Championship, Copa Sudamericana (the South American equivalent of the Europa League) and two Recopa Sudamericanas (South American Super Cup). De la Cruz even scored a screamer (5.50 in on the video below) in their 5-1 first leg demolition of Fluminense in the first leg of the Copa Sudamericana fina! At 37 he is still going strong and shows no sign of abating.

Pretty much the first name on this team sheet Neil Webb is one of, if the not the best player to come out of Reading. He remains the club’s youngest ever goalscorer and after over 70 games he moved on to Portsmouth aged just 19. He worked his way up the footballing ladder and eventually came to the attention of Brian Clough and under Ol’ Big ‘ed’s guidance he became England’s 1,000th player when Bobby Robson gave him his debut against West Germany in 1987. His reputation continued to grow and Alex Ferguson brought him to Old Trafford in 1989. His star couldn’t have been higher but shortly after the move he snapped his Achilles tendon on England duty and was never really the same player again. He went to the World Cup in 1990 and won the FA cup in the same year, yet despite winning 26 caps people will always be left wondering what might have been. 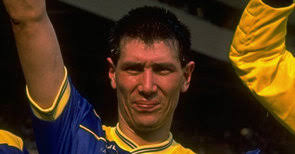 Presentation College alumnus Sanchez played over 250 times for the Royals before his switch to Wimbledon in 1984. As part of ‘the Crazy Gang’ alongside the likes of Vinny Jones, Dennis Wise and John Fashanu he secured his place in FA Cup history in 1988. Never a prolific goalscorer Sanchez scored the only goal in one of the biggest upsets in the history of the competition. He also holds the dubious distinction of probably being the first player in the world to be sent off for a professional foul after he palmed the ball around the post in a game against Oxford United. He is currently manager of Barnet where he replaced another ex-Royal Martin Allen. 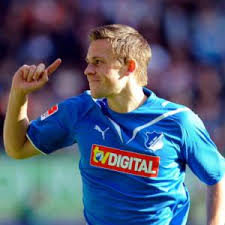 As much as I’d like to pretend that Gylfi hasn’t gone on to better things it is pushing it a bit to claim that midtable in the Championship is the same as midtable in the Bundesliga. Whilst he has struggled to cement his place in the Hoffenheim first team, Sigurdsson has very quickly endeared himself to the fans of the big spending side. Despite only starting 13 games last season he finished as the club’s second highest goalscorer with 10 goals and was voted as the fans’ player of the year. He also helped in leading Iceland’s under 21 side to their first ever European Championship in 2011 when they were only one goal away from making it out of the group stages. 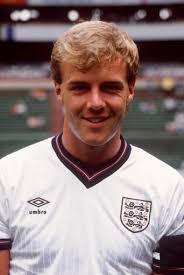 Part of the same Reading side as Webb and Sanchez, Kerry Dixon played over 100 games for the club in the early 1980s scoring 51 times before Second Division Chelsea snapped him up for the sizeable fee of £150k in 1983. The rest as they say is history. Kerry would become a legend with the Blues earning promotion in his first season and then in the following year finishing joint top scorer with Gary Lineker, earning himself an international call up and 8 caps. He currently sits seventh on Chelsea’s all-time appearance list and second on their all-time top scorers.

Every team needs a wild card and here is mine. I’m putting Maurice Edelston firmly in the ‘went on to a better career’ category to justify his inclusion. Maurice played for Reading for 13 years including appearances for England in unofficial internationals during the war. After his time at the club he retired in 1953 and it was from here that his career began to take off as he started a new life in the fledging business of sports broadcasting. Throughout the late 1960s and early 1970s Maurice was one of the BBC’s main commentators, working as summariser on the 1966 World Cup final as well as several FA cup finals. He went on to cover most of the big games over this period as well as Wimbledon. Maurice sadly passed away in 1976 aged just 57 but his name and memory lives on as the award for Outstanding Schoolboy in the Reading academy which is presented every year and is currently held by Jordan Obita. 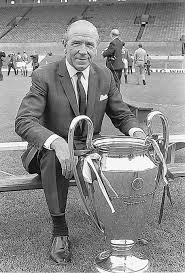 He may have only played a handful of games for Reading whilst he was stationed nearby during the Second World War but none the less Sir Matt counts as a former player and there can’t be any former player who has gone on to be a better manager. After surviving the Munich air crash on 1958 he rebuilt Manchester United culminating in becoming the first English side to win the European Cup in 1968. Along with that European title he won five league titles, two FA cups, five charity shields and was also the man responsible for unearthing players like George Best, Bobby Charlton and Denis Law. I think all that qualifies him to take charge of this side! So there we have a pretty handy looking side containing one hundred and ninety three caps, fifty eight of which are for England, continental winners on two continents and numerous titles and promotions. What it lacks in width it will make up for in solidity and the triumvirate of Webb, Sanchez and Dixon which played so often together should prove a devastating combination going forward. There’s also a good blend of footballing styles from across the ages so there will be plenty of variations so I will back this side to take on any and all comers.

Who have I forgotten and who doesn’t deserve to be there? Judging by some of the responses I’ve had on twitter I know there are some strong opinions so please feel free to share them below.