Reading 0-2 Watford - Would The Real Reading FC Please Stand Up?

Share All sharing options for: Reading 0-2 Watford - Would The Real Reading FC Please Stand Up? 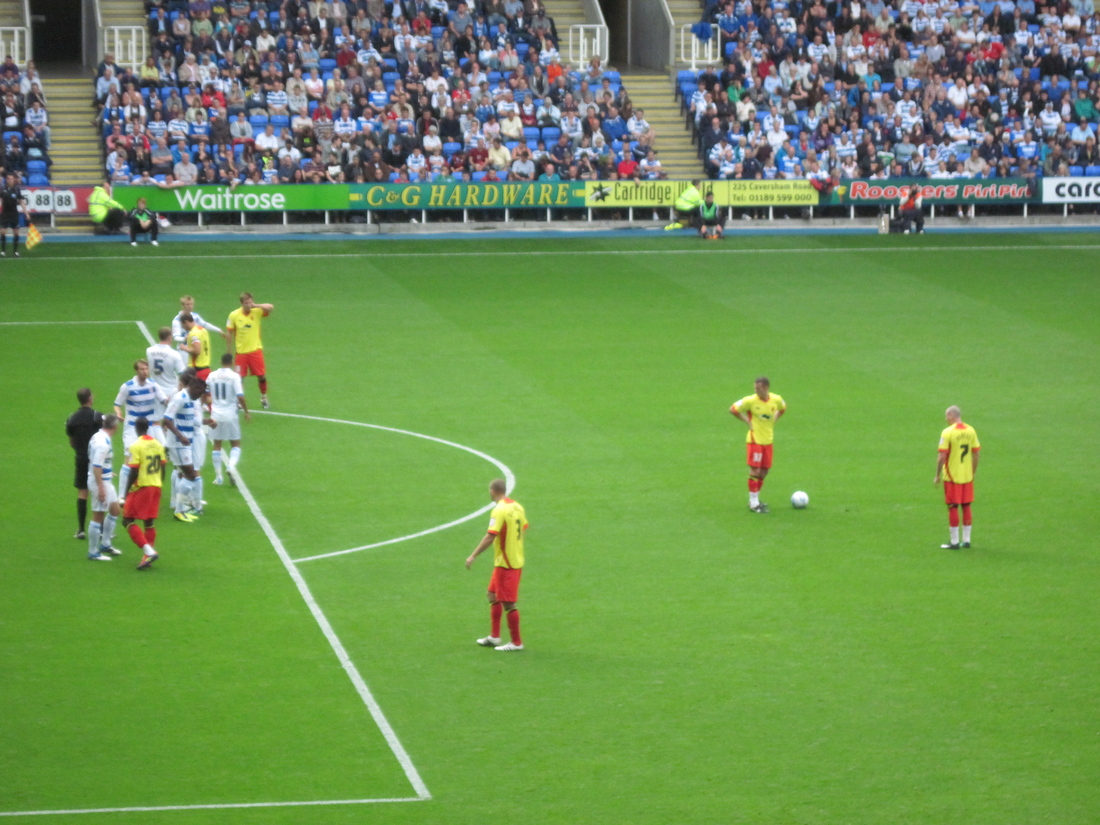 Football is all about ups and downs, and as Reading fans we've seen far more of the ups than the downs over the last 13 years. Since 1998 we've seen two promotions, three play-off finals, two play-off semi-finals as well as a couple of FA Cup Quater-Finals and a League Cup final 8 place, when Gazza graced Elm Park....

The above has little to do with yesterday's game except to put into perspective the number of good times we've been able to enjoy over recent years. Sure we've seen two relegations, and endured the dross under Tommy Burns and latterly Brendan Rodgers, but by and large we've been spoiled.

So if that didn't cheer you up then I'm afraid the below isn't going to do much better as we reflect on one of the worst Reading home performances in recent memories.

Going into yesterday's match there was a lot of optimism around the Madejski Stadium. Despite a run that had seen four straight defeats, the new signings of Kaspars Gorkks, Adam Le Fondre and Joe Mills had provided hope that this was the start of a new era and what better way to start then a home game against a Watford team that hadn't won this season.

However the dream began to turn into a nightmare right from the kick-off when Reading managed to lose possession from the opening kick and the insipid and gutless display that followed ensured that the stadium was half empty by full time.

Before I get into what went wrong for the Royals a word on Watford, who were a decent side who didn't just come to stifle the play and get a point but came for the win. The first goal came 12 minutes in after Pearce gave away a free-kick on the edge of the box which was dispatched by Mark Yeates low into Federici's bottom right hand corner. The goal was the least Watford deserved for a good first 15 minutes. Sordell looked lively up front while Taylor was a rock at the back and Eustace broke up the play well through the middle. You have to respect the way Watford consistently manage to build sides capable of surviving this division on an even tighter budget than we do and on the basis of this performance they'll be safe come May.

Reading slowly got more of the ball after falling behind but never looked like scoring. Things got worse in the second half when Reading again conceded an early goal. This time a Mills infringement resulted in a free kick being given 25 yards out on the Reading left, which came into the box, was only half cleared and eventually found its way back in and to the feet of Eustace six yards out, 2-0 game over.

Brian McDermott tried to change things up, making all three subs within 25 minutes but only Robson-Kanu looked like making an impact and even then we didn't trouble the Watford keeper, 2-0 the final score. 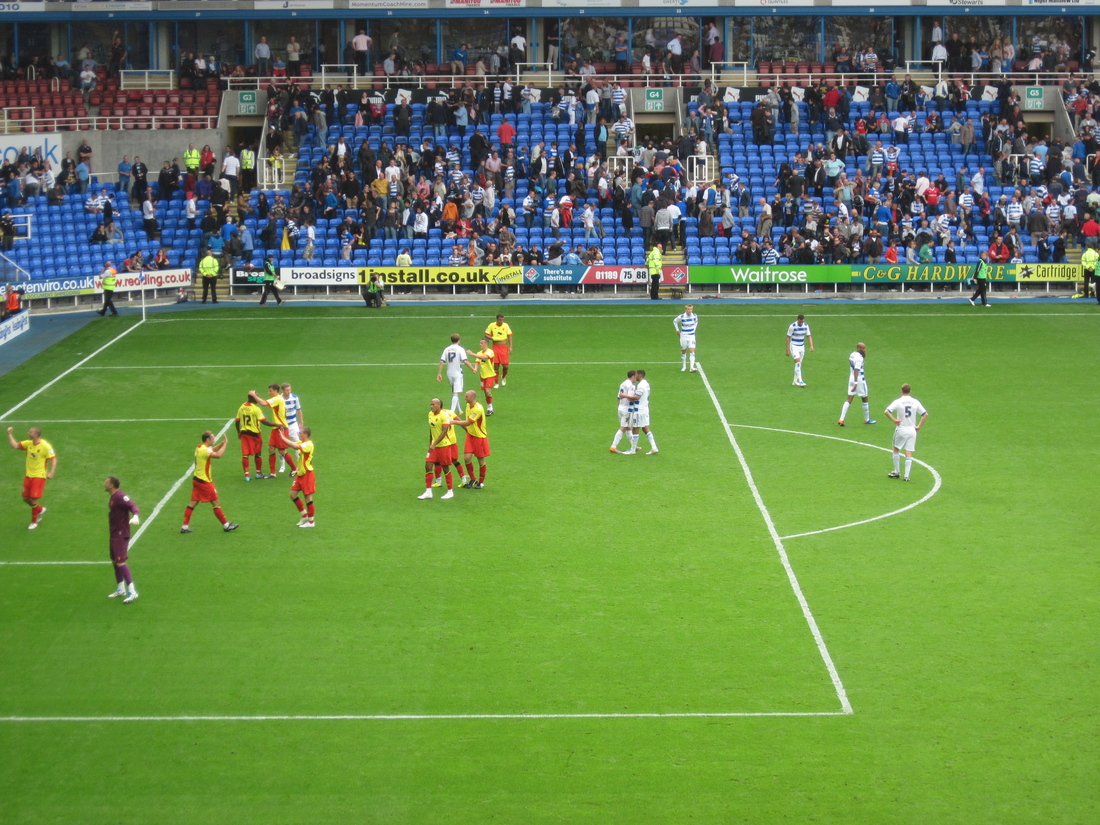 The most disappointing thing about the game wasn't that we were beaten by Watford at home, nor was it that it was our fifth straight loss but instead how ineffective and generally disinterested we looked out there. Reading didn't muster a single shot on target a stat that I'm struggling to remember us repeating in my 16 years watching the team. We've certainly been outclassed at the Madejski plenty of times but never have we been so limp and ineffective in the opponents half.

You had to feel sorry for the three home debutants, all of which gave a decent account of themselves and all must be wondering quite what they've let themselves in for. Kaspars Gorkks in particular looks to be a great signing and is a reassuring presence at the heart of a defence that needs to settle down as soon as possible. Mills Jnr was also alright, looking to play some neat through balls for McAnuff, Manset and Adam Le Fondre but blotted his copybook by giving away the free-kick that led to the second goal. Le Fondre worked hard but ultimately had no service and his only efforts were a couple of loopy headers that never really troubled Scott Loach in the Watford goal.

If the new boys gave a good account of themselves then the same couldn't be said for the rest of the team, with plenty of ineffective displays to go round. For the past year the midfield four has picked itself but something is missing this time round, I'd like to think it's confidence rather than passion but there's definitely something amis right now. Mikele Leigertwood was constantly giving the ball away and struggled to make a pass, while both Kebe and McAnuff struggled to beat a man down the flanks. Kebe in particular looked totally shot of confidence and resorted to cutting in and playing through the middle for long spells, while the slightly better McAnuff was also guilty of wasting possession when into good areas.

Up front and Mathieu Manset worked hard and held the ball up well without a lot of service and at the other end Adam Federici was solid if not spectacular. The biggest positive with regard to our Aussie keeper was the fact he was throwing and rolling the ball out rather then consistently playing long balls. Andy Griffin was slow but steady, while Pearce grew into the game after shaky start that included giving away the free-kick for the opening goal.

It's easy to sit here and slag off players but it's far harder to suggest what could have been done differently. Certainly Brian McDermott now has all of the justification he needs to drop anyone in the starting XI and Andy Griffin, Jimmy Kebe, Mikele Leigertwood and even captain Jobi McAnuff should all be looking over their shoulders over the next week. We've seen in the past with players like Kebe, Long, Matt Mills and Ian Harte how a dropping to the bench can spark them into life and perhaps that time has come again.

Shaun Cummings, Jordan Obita, Brian Howard, Jay Tabb, Hal Robson-Kanu and even Jake Taylor could all well come into the starting XI next week and there could be a return to the 4-5-1 that saw us slowly grind out results during Brian's first season in charge. There could also be some movement in the loan market and another Khizanishvilli/Leigertwood/Griffin type signing could spark the side once again.

Personally I'd like to see somebody signed who can take charge of the team and inject a bit of fire. While I was never Matt Mills biggest fan he was certainly someone who could make his feelings known on the pitch and right now we don't seem to have that player in our squad. Signing somebody in the mould of a Phil Parkinson would be welcome... though they don't just grow on trees.

Next up are Doncaster who have also struggled so far this season. While no game is ever a 'must win' it's going to be easier to get points on the board against Donny then when some of the big guns come down to the Madejski Stadium later this year.