The club have announced that Brynjar Gunnarsson has left the club after nearly eight years to coach back in his native Iceland. We wish Bryn all the best after giving amazing service to Reading Football Club. Here's Mike's tribute from 2011.

Welcome to the first of what we're hoping will be a week long look at some of the 'legends' of the Madejski Stadium era. Each day one of our writers will be picking out one player who they think deserves the tag of legend and at the end of the week we invite you to pick out your favourite. Today, Mike Terry looks at our current longest serving player Brynjar Gunnarsson

…thinking about the object of your desire every day.

…sleeping in a tee shirt that keeps them close at night.

…having a picture up in the lounge of them hugging your wife.

Okay, maybe that’s something other than love. Something verging on illegal. But it’s as close as I can get to describing the mancrush I have on Brynjar Gunnarsson.

First up, like Reading FC, he’s not a world beater and, at 35, probably never will be. When he signed for us, there was a communal shrug. Who is Brinjar Gunnarnansson? Why are we signing someone from Watford?! It turns out, though, that he is the epitome of what this Club, whose shirt he proudly wears, stands for.

Simply, he’s an over-achieving seven-out-of-ten man. If he went to any other club, he wouldn’t be the player he is at Reading. Shorey, Kitson, Harper, Sonko, Lita…none of the Prem Promotion old guard have consistently reproduced what they had at Reading. And as pretty much the only one left (subject to further summer moves), he’s the last representation of that particular collective success.

Futhermore, he’s a great example to younger players and, as a senior member of the current squad, he’s one of the foundations of the new breed of Reading FC over-achievers. I’d be delighted if he moved in to the back room team when he retires, working with the first team or carving out a career in the Academy. And…well…could he be the future manager? (Okay, maybe I’m getting a little ahead of myself)

It’s not all good though.

If you think about it, he’s really a bit rubbish. He’s no Usain Bolt over 5 yards (or 10, 15 or 20, for that matter), nor is he the greatest aerial challenger in the world. Heck, he’s not even that skillful. Oh, and I had a barney with Haydn Mullins about the tackle that Bryn got sent off for at West Ham a few Boxing Days ago (big girl’s blouse, tackles like that ten-a-penny on a Sunday at Palmer Park – and so on).

Yet, somehow, he’s always on the spot when danger presents itself and invariably able to pull out a worldy just when we need it most (Oi, Insua: NUTS!).

The combination of all of the above is what seals the whole loving deal. Fine, he’s also a classy bloke - family man, happy to do photo opportunities (aforementioned) and doesn’t call the police when a fan declares his love for him *ahem* (via a mate who was lucky enough to meet him at a recent STAR quiz). But that’s just schmultz. Anyone can fake a smile to make a weirdo go away.

But not anyone can seem to be so rubbish yet continue to amaze. As an unequivocally substandard footballer myself, I long to be underestimated in every game I play, before showing the opposition what my game and my club is really all about. I want to bag a brace to kick start a Premier League promotion push, I want to make that goal-saving tackle in front of thousands of fans and I want be a shining example of professionalism to all those who look up to me (actually, just someone who looks up to me will do).

But maybe that’s just greed. I’d settle for just going for a quiet drink with him and discussing his career. Perhaps he could tell me what to do to make people love me like I love him. Help me be a bit like my hero.

And he really is my hero, y’know. I’ve even got a tee shirt that says so: 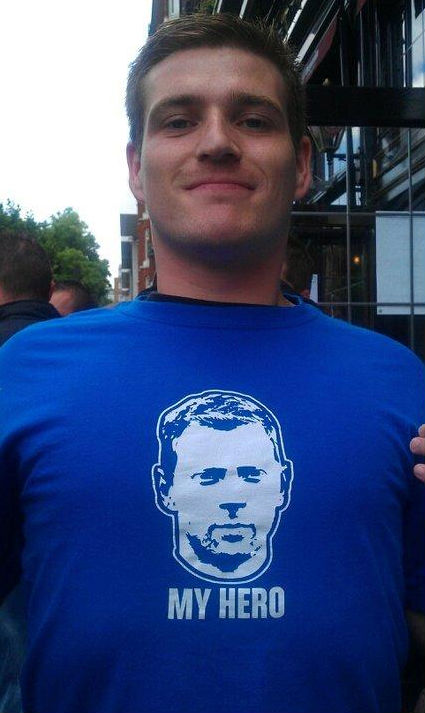