Share All sharing options for: Le Fondre Triggers Memories Of Another Reading Marksman 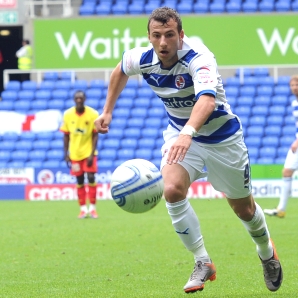 Yesterday we have a piece looking at Jamie Cureton's impact at the Madejski Stadium and why that makes him a legend. Today Ally Hendrie looks at how our latest recruit Adam Le Fondre could just replicate his success down the road.

When Adam Le Fondre netted to equalise against Bristol City, the shrewd, opportunistic nature of his finish showed the former Stockport man’s ruthless qualities in front of goal. Noel Hunt’s shot bobbled in front of David James, who could only parry to Le Fondre, the striker ghosting in at the far post to slot home after eagerly awaiting a slip-up.

The likes of Kevin Doyle and Shane Long came before him, but Le Fondre is a different kettle of fish. Yes, Doyle and Long are now forever engrained into the hearts of Reading fans, yet Le Fondre is more of a natural goalscorer. Goals are his bread and butter, the way he makes his living. 122 goals in 293 games – albeit most in the fourth tier – paint an accurate picture of an unerring finisher brimming with confidence around the six-yard-box.

Sound familiar? The same can be said of former Royal Jamie Cureton, whose own impressive haul stands at 229 goals in 668 matches. Indeed, comparisons between the two became rifer after Le Fondre’s dramatic equaliser at Ashton Gate – a cunning Cureton-esque finish. In December 2002, with Reading stumbling towards a 1-1 draw with Derby County at the Madejski Stadium, Ricky Newman sent in a high, looping ball towards the six-yard-box – seemingly an aimless one, with most of his teammates struggling to reach the box. Lee Grant in the Derby goal somehow conspired to drop the ball with Cureton stalking, leaving the former Bristol Rovers man to glide seamlessly into the six-yard-box and prod home.

In his glorious heyday of the early 00s with the Royals, that was what Cureton was all about. There was no lost cause; he always anticipated any mishap from an opponent. The man who, for Bristol Rovers, once scored four in one match against Reading signed for the Royals when they were in a state of flux. In 2000-2001 Alan Pardew began his first full season in charge after picking up the pieces of Tommy Burns’ doomed spell and guiding the Madejski Stadium to tenth place the previous season.

Therefore Cureton had to bed into a squad which was previously heavily bloated and tinkered with to its limit. But he rose to the challenge, scoring 27 goals in his first 46 games for the Berkshire side as Reading ultimately crumbed to Walsall in the Division Two play-off final. Now, Le Fondre has a similar task at hand. He has arrived at a club bereft of its crown jewel, Long – who left this summer for West Brom – and is arguably being put forward as a direct replacement for the Irishman.

The likes of Kaspars Gorkks, Joe Mills and Bognani Khumalo have all arrived with Le Fondre in recent months, so like Burns’ squad inherited by Pardew, the current Reading side has a fresh, new vibe to it. Le Fondre has been a crucial part of the Reading jigsaw since his move from Rotherham. His two goals have not been without warrant either – his header put his side ahead against Doncaster, setting the tone for his memorable equaliser against Bristol City.

Before the northerner put on a Reading shirt, the Royals were in the middle of a demeaning run of five games without a win. Le Fondre’s impetus and dynamism around the six-yard-box have propelled Brian McDermott’s men to a run of four unbeaten.

And now, McDermott is reaping the rewards. Last season, he struggled to find an established front two, with Long partnering the likes of Simon Church and Noel Hunt with mixed results. Plus there was the added conundrum of Mathieu Manset - a raw, unfulfilled talent, as of yet more suited to a place on the bench.

Le Fondre has already sparked a telling understanding with Church. It was his perfectly weighted through-ball that led to Church’s cool finish against Coventry. He is as much a productive assister as he is a penalty-box menace. The two are playing like kindred spirits right now, both men having started the last three games in which Reading have catapulted up the table following a patch of fraying form at the beginning of the season.

Church has always been more of a rough diamond than the finished article and, in the absence of Long, has prospered and looks a more mature player. The Welshman is reading balls over the top better, and is slowly being nurtured into an instinctive predator around the penalty-box.

That, along with the influential hand of McDermott, can be attributed to the work of Le Fondre. He looks a dream to play with, always on hand to help his striking partner. His movement is unpredictable and he can conjure up a chance out of nothing, much like the eternally revered Cureton.

In Cureton’s greatest days in the hooped shirt, Pardew’s side had a rigid spine set in stone, with the likes of Adie Williams and Phil Parkinson dependable and assured. Should Jobi McAnuff’s distribution improve, McDermott – also blessed with the emergence of Hal Robson-Kanu - could revel in a similarly concrete blueprint with Le Fondre finishing off the work of others.

The Madejski Stadium side have finally found a striker to score week in, week out, however well the team is playing. It’s been a while since the glorious days of the freescoring Cureton, yet his memories of Reading are not exclusively rosy.

Arguably, his lowest nadir as a professional footballer occurred at the Madejski whilst playing his former side in the colours of QPR. With his side 1-0 down, the ball ran to Cureton before Steve Sidwell shouted “jacks” to coax him into leaving the ball. Angered, Cureton suffered a moment of madness and lashed out at his opponent, leaving no other outcome than a red card. Such is the fickle nature of football that Royals fans rejoiced in their former hero’s ignominy. That was just one vigorous dip in the Cureton rollercoaster, but for Le Fondre, however, the journey is only just beginning.

If you'd like to contribute a piece to the site, please feel free to get in touch with us via email - thetilehurstend@gmail.com or on twitter @thetilehurstend.