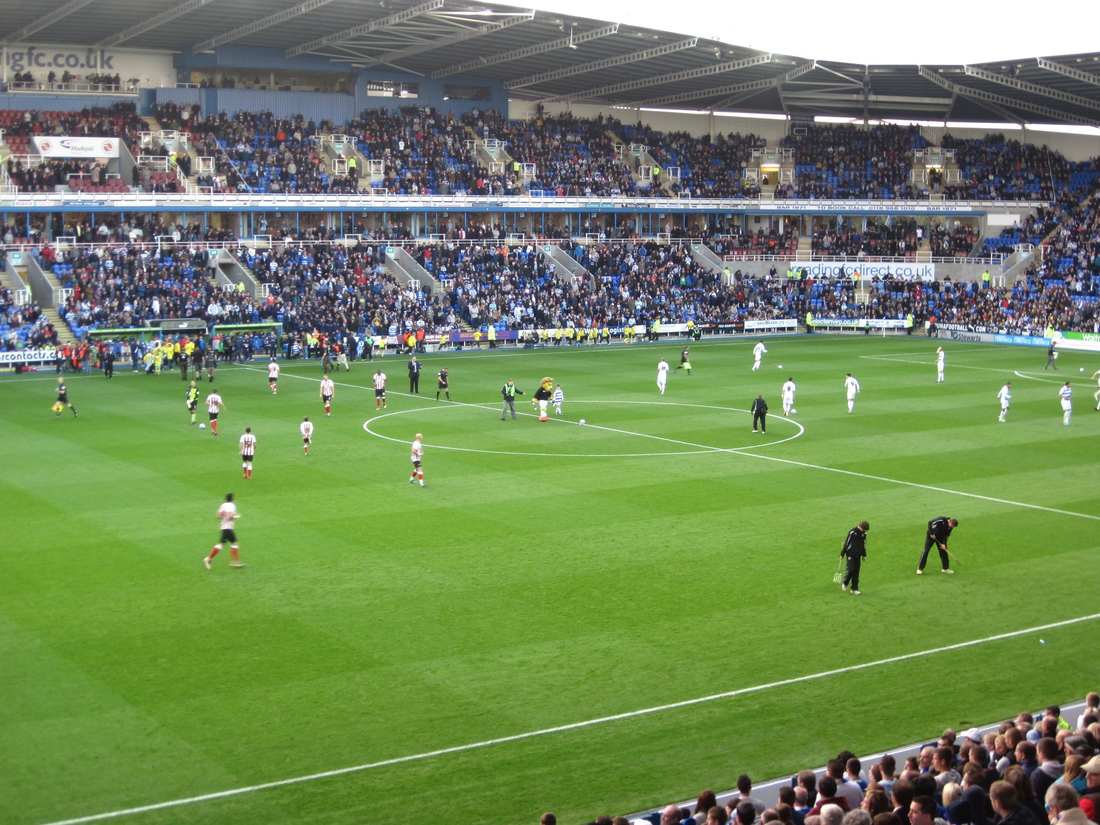 It's a well known fact amongst Reading fans that the Royals seem to be scared of holding a lead. One first-half goal this season. Our last two victories have seen us have the lead for roughly two minutes combined. But on the plus side, the five game losing streak had been turned around into six unbeaten. The newly-found resolve would be put to test against a Southampton side seemingly running away with the league already. The Royals made one change to the team which came from behind twice against Derby on Tuesday, fit-again captain Jobi McAnuff taking the place of Jimmy Kebe on the wing.

Reading started positively under the spotlight of the television cameras, as the gameplan from Brian McDermott's men became clear. Southampton's reliance on quick passing and movement was effectively neutralised by Reading's pressing game, giving attackers no time at all on the ball. This worked relatively well, forcing the Saints midfielders into giving the ball away regularly and Davis in goal having to kick the ball long rather than their preferred route to the wing-backs. Reading, meanwhile, crafted many good chances of their own in the first 45. Adam Le Fondre powered up McAnuff for one of his trademark runs, twisting the full-back inside and out, before unleashing a shot Davis did well to save. Le Fondre, full of running and neat flicks, was put through by Church but could only fire straight at Davis. And by far the best chance of the first half came when Leigertwood picked the ball up 35 yards out and unleashed a drive the keeper spectacularly tipped over. But yet again, the half-time whistle came and the goal had not come.

The second half saw the match open up somewhat, as Reading naturally tired whilst the Saints pushed forward looking for the winner, leaving space for the Royals to break into. Aaron Martin forced Federici into his first meaningful save, palming away his back post header. Richard Chaplow, so often a thorn in Reading's side in the past, also nearly opened the scoring but his shot was saved by Feds. Kaspars Gorkss demonstrated his class in blocking a Danny Fox shot destined for the net. Reading nearly scored through a Church header from McAnuff's back post corner, but it was another set piece from the winger which grabbed the first goal. His 20-yard free kick hit the post - first to the rebound was Leigertwood, who made no mistake from 8 yards.

Then came the turning point of the match. Dean Hammond, frustrated at his midfield exploits, picked up his second yellow for a reckless challenge on McAnuff. One-nil, ten men, a Saint turns sinner - game over, you would have thought. But this is Reading we're talking about. Suddenly, the gameplan which had been so effective for 75 minutes of the match went out the window, as the Royals seemed to ponder just what to do with that extra man. Instead, it was the Saints who were applying the pressure, and it told when Do Prado slid a ball in behind the defence. Robson-Kanu and Mills each left De Ridder to each other; he accepted this open invitation, turned inside past Cummings, and smashed a shot past Federici into the roof of the net. The game somewhat fizzled out after that - Manset seemed aghast not to win what seemed like a stonewall non-penalty, whilst Mills showed his immaturity at this level by trying the spectacular from 35 yards when a pass outside to Harte seemed the better option. One-all it finished, and the Royals went away disappointed at letting the advantage slip.

Most Reading fans would have taken a draw pre-game against the League leaders, but after this performance and the circumstances you have to be disappointed. I've seen the Saints goal again, and the defending is absolutely sinful - Gorkss comes for a ball that Pearce could easily have dealt with, whilst Mills and Robson-Kanu both left De Ridder totally free for a run in on goal. The frustrating thing was that for 75 minutes Reading dealt relatively easily with the Saints' threats - one lapse in concentration, against ten men, knocks the shine off what was a good performance against top-of-the-table Southampton. The Royals don't seem to be able to get the lead at the moment, and when they do, the panic sets in. There were definite positives - Le Fondre and Church seem to have a great understanding, and Alfie in particular plays with intelligence and skill. Leigertwood seems finally to have pulled himself out of his rut, as today he was everywhere making challenges and nearly grabbing a brace. But for every good performance there's a bad one - Joseph Mills is on thin ice; his set-pieces are woeful and his passing leaves much to be desired. Robson-Kanu also disappointed today after a few good performances. And Kebe, his replacement, looked every bit like he wants to leave in the summer or sooner, McDermott shouting at him before sending him on and Jimmy disinterested in tracking back. For all the saints in the team, there are always sinners; today, there were no winners.