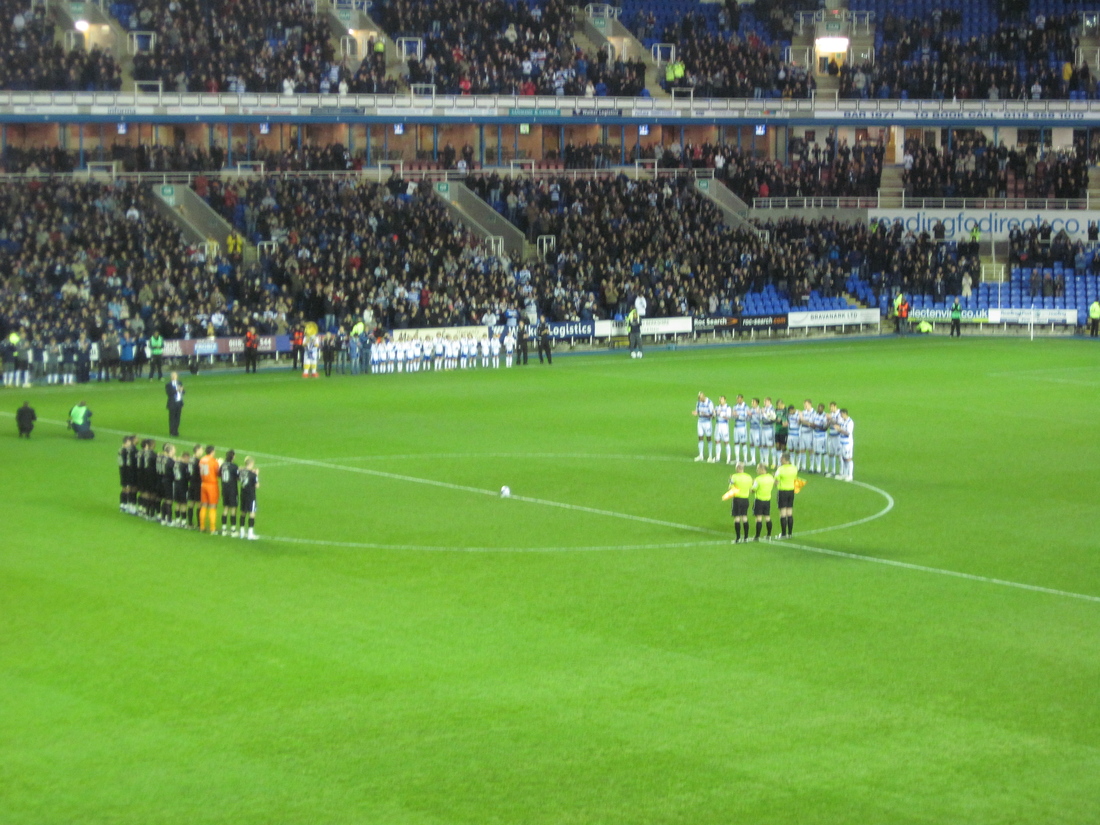 Reading had a note in the programme promoting the value of getting a half season ticket, but I might suggest they try marketing a half time season ticket, whereby you you only pay for the second half of a game because you'd be guartenteed some cracking entertainment if you had one of those. Once again Reading battled from behind to pick up all three points despite underwheling the near 16,000 inside the Madejski Stadium last night.

Below the jump I'll be recapping the night's events and the Royals bested the Posh and moved into the top 10 for the first time since the middle of August.

Sometimes I think I could generate these match reports in an out of office reply... does this series of events sound familiar?

It's quite alarming how many times you could apply that to a Royals game this season.....

However, that's an overly simplistic view of a game that once again had plenty of positives despite the underlying problems we're moving in the right direction and within two points of a play-off position.

So lets first focus on the positives from last night. Once again the defence seemed solid in open play, with the only goals conceded coming from a set piece and one in 'junk time' when the game was stretched and largely dead. Pearce was done for pace a couple of times and Ian Harte made an awful backpass that almost led to a goal but by and large you felt that we would be able to contain the Posh. Harte also showed off a fine range of passing and had a hand in his third goal in two games when floating in the corner that found Kebe's head and Church's foot on the line.

Once again Brian McDermott needs credit for making the right subs at the right times, something he's gotten right in the majority of his time in charge. Adam Le Fondre and Hal Robson-Kanu scored the key goals at the end of the second half and provided the extra bit of energy that we needed to finally break down a shaky away defence.

Credit also to Posh for coming to the Madejski and giving it a real go. It's easy to see why Darren Ferguson's team are one of the league's top scorers but at the same time their defence lacks the composure and stability needed to keep teams out at the other end. Taylor and Sinclair were full of running for the visitors and in McCann and Boyd they had midfielders capable of hurting you from deep. It would be nice to see Karacan and Leigertwood get into shooting range a bit more often, though to his credit Leigertwood did have a good crack at goal in the first half.

Going back to the start of the game and Reading kept faith with the same team who'd started up at Portman Road on Saturday, with Simon Church keeping his place ahead of Le Fondre and Harte staying in for the injured Mills.

Just as they had against Cardiff ten days earlier Reading found themselves pegged back early with Peterborough nearly finding the net in the opening minutes after Federici failed to fully deal with a wicked shot at goal that was eventually scrambled away. Not to be deterred, Peterborough continued to attack the North Stand and were rewarded with an opening goal after 15 minutes when Rowe headed home from a corner on the left hand side. It was the least the visitors deserved as Reading struggled to put two passes together, yet alone a serious threat on goal.

For all of our good points as a squad we've got to be one of the worst teams when it comes to stringing a set of passes together. Too often we're playing long balls down into the channels or just up to the strikers looking for flick ons and in this post Shane Long era it's not yielding great results nor is it pleasing to watch. Again perhaps I'm being too critical but having seen what we're capable of when we do keep the ball on the deck it's frustrating to see the out ball used over and over again instead of the team being patient and seeking to slowly pass and move.

Regardless of a lack of style, Reading were level before the break when they scored their first goal in front of the South Stand this season midway through the first half. It was just the second goal we've scored in the first period this year and it came through the man who scored the first, first half goal, Simon Church. Church profited from getting on the end of Jimmy Kebe's far post header, with the Malian finding acres of space from Ian Harte's corner on the right.

Into the second half and Reading slowly started to take control against a tiring Peterborough side. Still they couldn't make the decisive breakthrough until Le Fondre and Robson-Kanu replaced Church and Karacan. Immediately a series of balls were whipped into the area, slowly getting closer until a ball from the right found Kebe again free at the back post, with the winger able to stab it out to Le Fondre who chipped the ball into the top corner to give us a lead we'd never give up. Minutes later and Kanu made it 3-1 with a tremendous burst from just inside the 'Boro half to the edge of the box where he hit an exquisite shot with the outside of his boot to wrap up all three points. There was still time for the away side to grab a late goal to set up a nervy finish when Federici hesitated coming out of his area, but it wasn't enough and Reading held on for a third home win of the season.

It wasn't a perfect game and once again Reading lacked conviction the fluidity that took them to such great heights during the later half of the past two seasons. but they showed that they are more then capable of getting a decent result in the Championship this season. It's pleasing to see the spirit in the team and also the fact that we've now got players on the bench capable of coming on and making a real impact.

On the downside Kebe looks as lost as he did when Brian first took over and with several starts under his belt since he recovered from injury, it's a struggle to make excuses for the winger who looks like he's about to go into his final six months as a Reading player. Kebe should keep his place at Blackpool as skipper Jobi McAnuff is suspended after picking up a fifth booking of the season but Hal Robson-Kanu deserves his chance to impress from the start.

Everybody else at least had an OK game though perhaps maybe Pearce/Gorkks and the subs aside you'd be hard pressed to rate anybody above a 7.

Next up is a trip to the North West and a game at Bloomfield Road, a place that has mixed memories for Royals fans. It was the scene of one of Brian's rare blips at the end of the 09/10 season, when we lost on a terrible pitch but also a place where we memorably won 4-0 during our 93/94 promotion season, a game that saw the side applauded off the pitch.

Also a quick reminder that you've got till a week on Friday to enter our competition to win a Reading Scarf with Savile Rogue and also to stress that we're happy to take any contributions you may want to have hosted on the site, be that a match report, opinion piece, or anything Royals related. If you want to get in touch just email us at Thetilehurstend@gmail.com or send us a tweet to @thetilehurstend