Share All sharing options for: Blackpool 1-0 Reading - McDermott frustrated as Royals are beaten 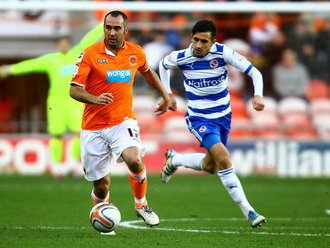 Reading’s two game winning run was ended after a frustrating afternoon away at Blackpool in a game of two halves.

Manager Brian McDermott was forced into two changes from the team that started the midweek win against Peterborough. Jobi McAnuff was suspended after his fifth booking of the season which meant a start for Hal Robson-Kanu on the left-wing while Noel Hunt was ruled out through injury with Adam Le Fondre earning a recall.

Blackpool were aggrieved in the opening minutes when a Shaun Cummings challenge on Callum McManaman outside the penalty area wasn’t deemed a foul which could have resulted in a straight red-card with Cummings the last defender.

Minutes later Cummings was involved in a move down the right when his cross fell to the head of Adam Le Fondre who spurned a great chance just wide of the Blackpool goal. It was a miss you wouldn’t associate with a player who has thrived on those goalscoring opportunities throughout his career.

The Royals were constantly a threat on the break with Kebe finding space out on the right-wing. On two occasions he found himself clear of the Blackpool defence with his first effort wide of the Blackpool goal before his cross was narrowly missed at the back post by Robson-Kanu.

The first-end ended on two decisions which angered McDermott. Simon Church had a goal disallowed after he pounced on Adam Le Fondre’s header which the assistant referee deemed to be offside before Alex Pearce was denied a penalty when he appeared to have been pulled back inside the Blackpool area from Ian Evatt.

Despite the half ending on a sour note with two decisions that went against us the team had looked threatening and the more likely of the two sides who would score. How that changed in the second-half.

Holloway half-time team talk worked wonders with his Blackpool team pumped up meaning business. Blackpool were soon ahead early in the second-half when McManaman was rewarded for an excellent cut-back with a neat finish inside the Royals penalty area past Federici who was helpless to the shot. Blackpool continued to press and McDermott’s side struggled to get back into the match with Blackpool’s significant improvement in their performance along with Reading short of ideas.

It could have been two with Lomana Lua Lua breaking down the right wing where his shot was outstandingly tipped wide by Federici for a corner.

McDermott rang the changes with Manset replacing Church and Antonio making his appearance since returning from a loan spell with Colchester in place of Kebe who looked far from pleased when he was substituted.

Reading pushed hard for an equaliser without creating anything clear cut and in the end were soundly beaten by a Blackpool side that turned in an excellent second-half display. Reading were far from happy with the decisions taken in the first-half but it’s back to the drawing board with West Ham the visitors to the Madejski Stadium next week.