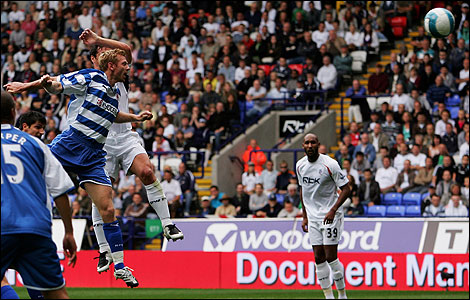 Just over a week ago football lost one of it's good guys in Gary Speed. The tributes all week have been moving from up and down the country but I wanted to draw attention to this tribute by Cardiff City fan Simon Richards which brings home how it's affected people on a personal level. Simon regularly writes for us on our View From The Town End segment when we play Cardiff and you can follow him on twitter @SJRichards79

There I was, a grown man of 32, driving a slightly battered Modeo down the A470 breathing as deeply as possible in a vain attempt to stop those bloody tears again.
The last time I cried was probably in 1996 when my dog was put down. Since then I’ve been through break-ups, relegations, football and nut collisions, watched countless chick flicks and numerous X-Factor sob stories without even the hint of a tear leaving my eyes. I don’t do that sort of thing – some men cry and some don’t and I just don’t. Not because I’m well hard or pwoper Nawty but because I just never feel like it – my emotions never get to that level. I am able to treat situations in a cold heartless way that enables me to leave endless emotional situations with a dry hankie and a clear head.
I’m buggered now – the last week I have been acting like a pregnant WAG. All hormones, tears and moments of bizarre realisation. All this because a man I never met had died. That happens on a daily, infact hourly basis. In the last minute about 30 men I’ve never got to know have met various ends, so why has the death of Gary Speed had such an effect on me and thousands of others?
On the radio came a minutes silence from the City of Manchester Stadium. As with almost all other tributes to Speed the fans weren’t happy to sit silently but instead started cheering and chanting – ‘There’s only one Gary Speed’. This from fans who have no affinity to him what so ever, neither as a club or nation. This phenomenon was echoed throught the UK as fans who rarely sing their own players names joined as one to sing about a player that has united the footballing world in grief and bought vicious rivals together.
I have never known anything like this before. After 3 decades of football obsession I’ve seen many players come to the end of their glittering lives. Often sadly, in the case of young players taken in their prime and often in a haze of historic glory, such as John Charles. Minutes silences have been beautifully observed and fans of clubs joined together, statues erected and books writen. But this is different. This is unique. This is Gary Speed.
When Liverpool fans stood at Anfield singing Speed’s name, moping tears from their brows I knew something was up. Speed had played for Pool’s rivals Everton with some aplomb. He had figured in countless midfields that had taken to the Anfield turf to take on the home heroes, with some success, yet they still sang his name as if he was a returning hero being laid to rest.
http://www.youtube.com/watch?v=_baqt3jDJSI
They didn’t sing his name because of his deadly left foot. They didn’t sing his name in memory of his Leeds triumph and they didn’t sing his name because of his record breaking Welsh career. They sang his name because he was a truly good bloke, a man that had time for everyone and a man who smashed the stereotype of ‘The Footballer’ to smithereens every day of his career.
Countless pro’s have taken to our screens and each has been caught breathless, telling tales of the day they were taken under Gary’s wing, or the day they received an arm round their shoulder from Speed. Men who have played through the pain barrier with broken limbs, who have never pulled out of a meaty challenge  have been left in tears as they recount their own personal trubutes. And each tribute, to the last has been positive.
Commentators and presenters were left on the edge of breaking down, and some couldn't make their way through their pieces:
http://www.youtube.com/watch?v=HVQoUpo9rX0
But the most emotional aspect of this terrible story was nothing to do with football. Gary seemed, to all those who knew him, to have it all. He was the man we wanted to be and our wives probably did as well. Hideously good looking, viciously well mannered, sharp suited and charismatic he made us average men look bad.  He had a fantastic family and home, and a career that was going into the stratosphere.
He was well balanced and while he felt emotion he never let it cloud his judgement. He smiled constantly and helped out charities, such as the one I work for. He had time for all and a word for each.
So just why would he do such a thing?
What would make him decide to never see his children again, to never see his grandchildren, to never sit down for Christmas dinner or share a beer with his son’s. To never celebrate his children’s graduation, or just share a hug. To never hold hands with those he loves or shake a fist at those he doesn’t. To never simply wake up again.
What makes anyone make that choice? And that is the saddest thing. The thought that Gary Speed, loved by so many, felt so alone in those last minutes.
If he had asked for help a stampede would have made it’s way to Chester. If he had asked for a word of advice he would have got an essay.
Gary’s death is horrendously sad and a true waste – he should still be here. If only he’d known how well loved he was when he was alive we wouldn’t need these amazing tributes.