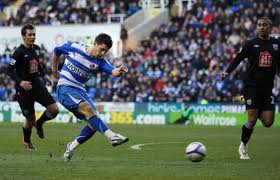 The Scene: FA Cup Third Round game at the Madejski Stadium

Steve Coppell may have been one of the greatest managers in Reading's history but it's fair to say that his approach towards the FA Cup wasn't one that endeared him to many. Sir Steve had treated the cup as an opportunity to rest his best players and while we'd still had some memorable cup games against the likes of Manchester United and Tottenham, it was still very much treated as a potential distraction to our league progress rather than a catalyst.

But Brian McDermott saw things differently and used the Cup as a way to spark our league form.  2010 saw memorable wins at Anfield and the Hawthorns as well as the a win over Premier League Burnley and taking the club to within 45 minutes of a first semi-final in over 80 years.

Fast forward 12 months and Brian was once again masterminding another cup run, starting with a visit from Premier League newboys West Brom.  The pre-match build up had been geared towards the return of two former Royals, Nicky Shorey and Simon Cox, but it would be their former team-mate Shane Long that would steal the headlines as the Republic of Ireland international scored the only goal after 41 minutes to help Reading dump West Brom out of the cup for the second straight season.

Shorey and Cox never made it off the bench and the Baggies were also reduced to ten men after two bookings as Reading picked up a deserved victory and a third Premier League scalp in two seasons to start another cup run that would only be ended by eventual winners Manchester City.

Stay tuned over the next couple of weeks as we run through the other best 9 moments of the year.