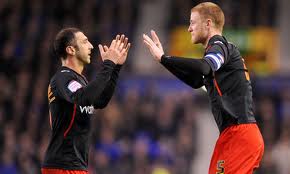 The Scene: FA Cup Fifth Round game at Goodison Park

After looking back at our 1-0 third round win, our second nomination for Reading FC moment of the year comes on a chilly night at Goodison Park where Matt Mills would have arguably his finest night as a Reading player as the club once again upset the odds in the FA Cup.

After knocking out the Baggies, Reading squeaked past League Two Stevenage in Round Four to make the fifth round for the second successive season. Due to problems with the fixture list their fifth round tie would have to be played midweek away against either Everton or Chelsea, with Chelsea looking the more likely winner after earning a replay at Stamford Bridge. However Everton stunned the Champions in a penalty shootout to set up the tie at Goodison.

Reading were struggling with injuries going into the game, and had to start youngster Alex McCarthy in goal as well as giving a start at right back to Brynjar Gunnarsson. Everton meanwhile named a team that contained the majority of the side that had played in the cup final just over 18 months previously.

But despite the mismatch it was once again Reading who emerged victorious on a freezing cold night in Merseyside thanks to Matt Mills' 26th minute goal and a couple of sensational saves in goal from McCarthy. Mills was sensational on the night, a rock at the centre of the defence and producing a block at the death that kept Everton from almost certainly equalising. It was a real captain's performance and one that finally convinced a lot of Reading fans of his leadership and defensive skills, after an up and down first 18 months at the club.

Sadly Mills would be gone just four months later but his goal that night in Liverpool will live long in the memories of those that were there and for those sat watching at home. It gave Reading a place in the quarter-finals of the cup for the second straight season and helped boost confidence on a run that would also end at Wembley in the play-off final.