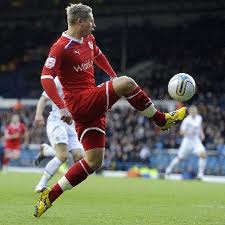 Lightening doesn't strike twice is the old expression but for a third straight season Reading's league form seems to be hitting top gear just when it's needed the most as we moved up to 7th in the league with a 1-0 win at Elland Road.

Below the jump we'll have a quick look at the final game before Christmas, as Simon Church sent all Reading fans into the festive period with a smile.

Readng went into the game forced into three changes, as injurites to Noel Hunt, Jimmy Kebe and Ian Harte meant starts for Simon Church, Hal Robson-Kanu and Andy Griffin. For Griffin it was his first appearance since the infamous 2-0 home debacle against Watford and he couldn't have asked for a harder return, being played on the left hand side of the back 4 and given the job of marking Snodgrass.

Leeds meanwhile had to make a change in goal as Reading loanee Alex McCarthy wasn't allowed to play, with Andy Lonergan returning between the posts. Sadly for the Leeds keeper he did his long term prospects no favours at all by being partly to blame for Simon Church's second minute opener. A long ball over the top from Karacan (otherwise known as the L1 + Triangle ball) gave Church room behind the Leeds defence down the right but the ball could still have been claimed/cleared by Lonergan. Unfortunately for the Leeds fans, their keeper was blighted by a moment of indecision as he stopped coming and settled for a position around his six yard box. That gave Church enough room to simply lift the ball over his head and into the net, 1-0 and Church continues his run of being the only Reading player to have scored a first half goal.

Both teams then traded spells of possession though neither really dominated. Leeds were stifled well by the Reading midfield who relished in the role of controlling a game, rather than having to chase it.

Reading did have a couple of chances through Jobi McAnuff while Leeds went close through Pugh and Snodgrass but really this was a low key Championship affair with neither team showing a lot of quality, but there was no lack of effort.

Performance wise it was a solid day all round, especially from those that had come into the team. It's good to know that we've got capable squad players in the likes of Griffin though it'll be interesting to see who gets the nod at left back on Boxing Day if Harte, Mills and Griffin are all available for selection.

The only other concern was with Jem Karacan who went off injured in the second half, though Jay Tabb played well as a substitute and will do a fine job if needed on Monday. Also it was good to see Antonio make an impact from the bench, with his power, goal scoring ability and a long throw, he's certainly something a bit different and if he can improve on his overall technique he could make a real impact in 2012.

Simon Church managed to find the net for the fourth time in as many games and hopefully we'll be seeing plenty more to come in the new year. It was around this time last year that Shane Long really began to score the goals that fired us up the table and with the team now having won four out of five games we're firmly back in the play-off hunt in seventh place just two behind sixth placed Leeds.

Brighton now await on Boxing Day and out of nowhere Reading could be going into the new year in a play-off spot.