View From The Town End - Brighton

Share All sharing options for: View From The Town End - Brighton 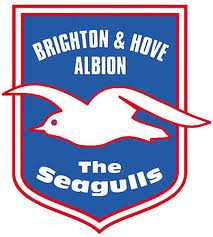 Brighton make their first visit to the Madejski Stadium for five years on Monday as they meet in what promises to be an intreguing matchup. The two sides couldn't have started the season anymore differently as Brighton kept up their momentum from winning League One to storm into the top two while Reading's Wembley hangover had them just outside the drop zone. In recent weeks the two sides have come alot closer together and Reading go into the game above the Seagulls in the table.

Ahead of this festive clash we spoke to Sam from Brighton Fanzine The Seagull Love Review who shared his thoughts on the game.

How has your season gone so far?

Pretty good, we're still in the play-off race with about 30 or 40 other teams! I suppose we've had more ups and downs than most of the clubs this season but it's such an exciting divison. It's funny because we kind of won all our matches for 18 months and then suddenly, bang, 9 matches without a win and we looked toothless. Things have levelled out a bit since then, except for last week actually, ha!

What have you made of the Championship in general, has any team or player really impressed you?

The Championship is a joy, it really is. Most Albion fans will agree that it's a level where we feel quite at home and after 5 seasons in League One it has just been nice going to new grounds and having decent away support coming to Brighton. The play is better quality overall, though to be fair the teams at the top of League One they do play good football, thus the decent starts for us, Southampton and Posh. The difference last year is that you knew that some rubbish team down the bottom wouldn't beat you; this year it really is the cliched 'anyone can beat anyone'. In reality, all the clubs have players who change a game, all the teams play at a crazy pace, and all the teams will jump on a mistake and score - that's a hell of a jump from legaue One. There's also increased media interest which is really nice.

We've seen a lot of players who can really control games, and though we've lost a few games, no-one has stood out head and shoulders above the rest.

How has the move to the new stadium gone? Do you think you've lost a bit of an advantage playing wise leaving the Withdean?

No, the players hated Withdean and so did the fans, frankly. We had some great season-long home records at Withdean but equally some really bad ones, it depended on the team. I suppose you lot saw one of the better teams when we beat you all those years ago in the rain but equally you have beaten us there when we were shite.

The Amex is the best thing to happen to the football club in, probably, it's history if you think about the legacy of the place and what we can do with it in the future. Last weekend saw a sort-of baptism of fire against Burnley; with us going down to 9 men with barely 10 minutes gone, the crowd rallied round and created the best atmosphere yet, and even though we lost, the fans have been going crazy about the stadium and how it really rocked that day. You guys will know what it's like to move to a sparkling new ground and welcome tens of thousands of people who you've never seen before, it takes a bit of time, but it's been great, a wonderful experience for everyone.

What are your best memories of Reading v Brighton?

At the Madjeski? Drawing 0-0 when we won the league ahead of you, then I think we won the next season 0-1 but still went down. We scored after about 30 seconds on the first game of the season I think a few years back but you came back and walloped us. At home, I remember when I was quite young, maybe 12, that you lot were top of the old Third divison and had a yellow and red striped kit, you beat us that day at the Goldstone! Of course the 3-1 win at Withdean was a great day for us, Bobby Zamora was imperious that day and a few fans will have that down as the best Albion performance at the Theatre of Trees.

No real shockers that I can remember, I'm sure you've got some suggestions?

Who should Reading fans be wary of on Boxing Day?

The bloke in the row in front eating too many sprouts the day before probably. In terms of Albion players I would say Craig Noone - a little winger who causes problems. Quite fancy CMS to get a goal too maybe, he performs in the bigger games and there'll be lots of Albion there to hopefully spur him on.

The name McAnuff will send shivvers down any Albion fans back. He scored a last minute winner for P*lace at Withdean a few years back. Ouch.

The random results the team has generated this year makes these preciction things very difficult. If we're on our game I think we could win, if we're not we could easily lose. You lot have had the better results against us in recent years so should be confident, and recent away matches at pseudo-local teams have been mixed - won at Pompey, lost at Southampton - so I dunno, boring 0-0 and frozen fans!

Thanks again to Sam and you can follow The Seagull Love Review on Twitter @TSLR  They'll also be selling copies of the latest issue outside the Madejski on Monday so pick one up if you've got a couple of quid spare.