Share All sharing options for: Top Ten Reading FC Moments Of 2011 - Part 5: So Close But So Far 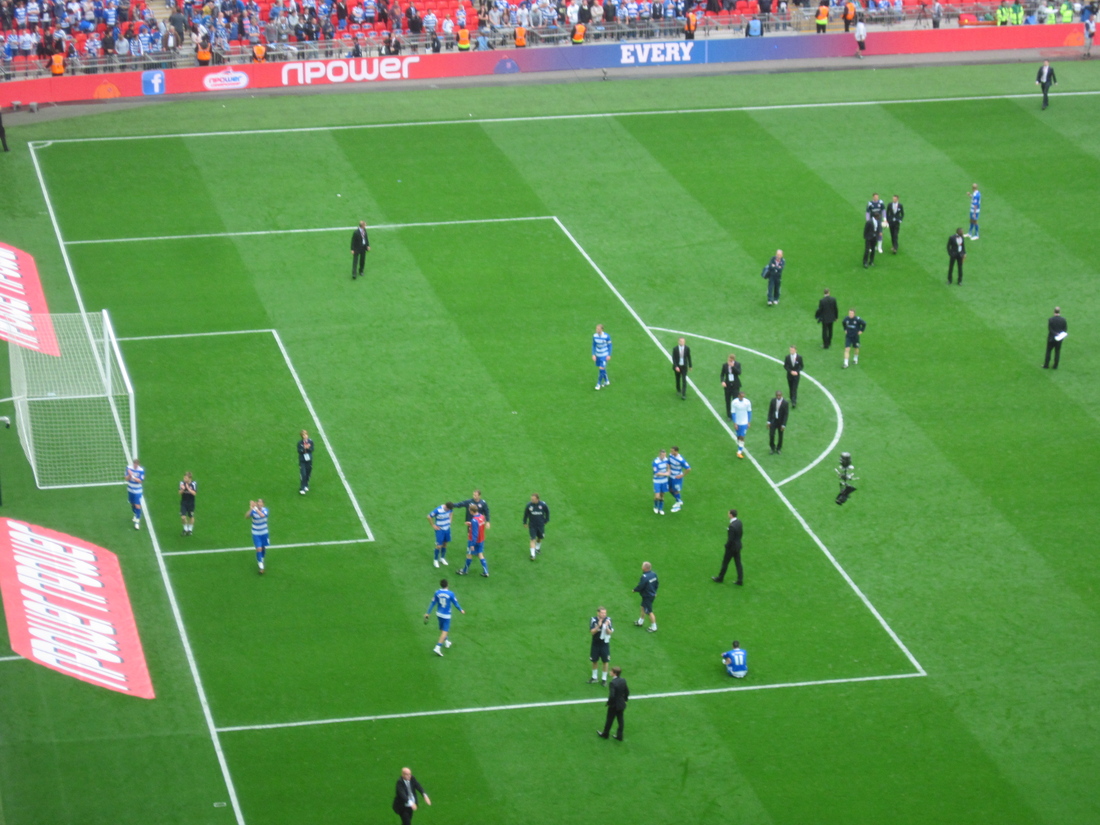 It's very rare to consider a defeat in your best moments of the year, especially one as heart breaking as this. However it would be unfair to write off what was one of the most enjoyable days to be a Reading fan and one moment in particular ranks up there with any I've witnessed in 16 years as a supporter.

Jon's set the scene for this game quite nicely in the last part of our countdown but last May was a great time to be a Reading fan. We were heading to the new Wembley for the first time and just 90 minutes away from a Premier League return that had looked a million miles away when Brian McDermott had taken charge just 18 months before.

Despite some well publicised ticketing problems and going into the game as underdogs there was still a great atmosphere in the lead up to the game and to many fans this was the lowest pressure we'd felt in any of the 4 previous play-off campaigns.  In 1995 we were worried that it would be our only chance to mix with the big boys, while 2001 we were heavy favourites. 2003 and 2009 ended in the semi-finals so we never had the Cardiff/Wembley jitters to worry about. This time though the final felt like a bonus.

Nobody had expected to be in with a chance of promotion and six months beforehand some fans were still looking down rather than up.  On top of all that there was a bit of a been there done it feeling amongst some of the fans, and the fact we'd been in the Premier League just 3 years before certainly took some of the shine of of the 'big prize'.

Brendan Rodgers' Swansea were the more fancied by pundits and the neutrals and had beaten us twice in the league already. On top of that they had won plenty of plaudits for a good passing game and the general feeling I sensed amongst football fans was that it would be nice to see a good passing side and a Welsh side back in the top tier.

Despite that we went into the game quietly confident of an upset. Outside of 50 minute meltdown to Sheffield United, Reading had gone most of 2011 unbeaten and the 3-0 demolition of Cardiff, and big cup wins over the past two seasons, had certainly shown we were capable of doing it in big one off games.

I remember walking into the ground, going up what seemed like endless escalators to walk into the stadium and for the first time being generally awed by a football ground. For all of the criticisms of the costs and time taken to build the new Wembley you couldn't fault it in terms of quality and it sent chills up my spine to think in just a few minutes I'd be seeing Reading playing there.

Once the game kicked off for 20 minutes we looked the better team and a quiet confidence began to sink in... then it all went wrong.... so very very wrong.

There's no point recapping the first half, heck this is a BEST MOMENTS piece but it's fair to say that at half time and 3-0 down most fans had resigned themselves to defeat and were only hoping we'd avoid being embarrassed the way Bolton had been in the FA Cup semi-final at the same venue a few weeks beforehand.

But what happened next is the reason this game makes my top ten because I don't think I've ever gone as crazy as a fan. Perhaps it was having had to sit there and watch Swansea go crazy for half an hour. Maybe it was pent up frustration and anger from seeing leads disappear in two previous finals or from our limp relegation in 2008 but the joy at seeing Reading storm back into the game is something that I doubt I'll ever feel again.

Fittingly it was started by Noel Hunt, was of the most emotive and passionate guys in the squad. His diving header deflected in by a Swansea defender gave the scoreline at least a hint of respectability and gave us all something to cheer.

A few minutes later though.... the Reading end literally shook. Matt Mills' goal suddenly put us back in the game and the fans went crazy. Suddenly it was Reading not our opposition making a dramatic comeback in the play-off final. This wasn't Fabien De Frietas, this wasn't Byfield skidding the ball past Whitehead, or two Burnley players smacking thirty yarders in at the Mad Stad, this was Reading putting a team on the ropes and stunning their fans into silence.

The next few minutes were magical in the Reading end with everybody on their feet singing and urging the team on, and when the ball fell to Jem Karacan on the edge of the box we were poised to bring the place down.... only it hit the post.

Almost instantly you felt your rollercoaster heading back down the climb, you knew at that moment that it just wasn't to be. A stupid tackle by Andy Griffin sealed our fate and the quiet trudge back to Berkshire ensued.

Even so this wasn't as gutting as the previous play-off defeats. Yes it hurt and it still does, but the way we'd so nearly pulled off a miracle and the fact we HAD been there and done it softened the blow and gave us reasons to smile.