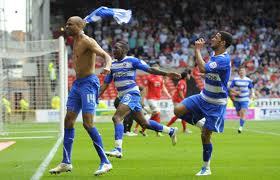 The Scene: Championship game at the City Ground, Saturday April 9, 2011

Generally we've been doing these chronologically but due to the chaos over Christmas I've only just been able to catch up, so apologies that this one's out of order but I think we'll all agree there's no harm when it's a game as good as this one.

Below the jump I'll be looking at another key game on our road to Wembley and one of the most exciting away games in recent years.

Going into the game Reading were in sixth, three points clear of Forest and if ever a game was to be called a 'six-pointer' then this was it. A win would give Reading a six point play-off cushion while a defeat could see them holding on via goal difference. The City Ground hadn't been a particularly happy hunting ground either, with the club relegated out of the second tier at the same venue in 1998 on a day that saw Forest crowned Champions.

But this was to be the Royals day, with Brian McDermott's side emerging victorious despite being 2-1 down with just over half an hour to go. Before that Reading had taken the lead through Ian Harte, with the left back curling in a great free-kick from 20 yards only to see Kris Boyd equalise from the penalty spot before half-time. After the restart Forest took the lead through Robert Earnshaw and as a Reading fan you began to fear the worst.

But we should have known better then to write this team off and just minutes later Jem Karacan heading the ball in to the delight of the traveling fans. Just eight minutes later things would get even better when Kebe bundled the ball home after Zurab's shot was blocked and suddenly all three points were on the cards.

The greatest drama was still to come though, as Forest were once again given a penalty with just two minutes remaining. Lewis McGugan converted but it didn't stop Reading from going for the win and a minute into stoppage time another scramble in the box saw Church get the deciding touch on an effort that beat Lee Camp and sent the Reading fans crazy.

To see a last minute 4-3 win on a sunny April day over your closest play-off rivals has to be up there with any dream outcome to a traveling fan and on this day, the team delivered.