Top Ten Reading FC Moments Of 2011 - Part 8: Winning Ugly With A Beauty From The Beast

Share All sharing options for: Top Ten Reading FC Moments Of 2011 - Part 8: Winning Ugly With A Beauty From The Beast 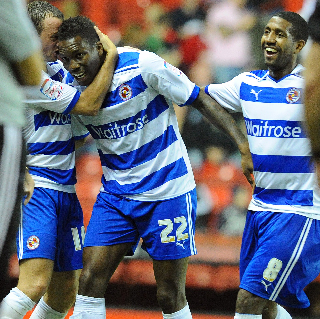 Again, if this were simply a 'best games of 2011' this game wouldn't make the list as it was one of Reading's worst performances of the calendar year. However, the nature of the win and the context of when it came was vital and a the emotion shown by Brian and the players after the game proved what a massive win it really was.

Going into the game Reading had slowly begun to turn a corner but the team still found themselves just two points clear of the relegation zone going to Ashton gate to play a team that hadn't won a home game to that point.

Never the less it was Bristol City who controlled the game, and by the hour mark had eased into a two-nil lead that Reading really didn't look like threatening. It could have even been three but Pitman smacked the bar.

As the minutes ticked away all of the positivity that had been built up from steady performances against Doncaster and Coventry was evaporating and suddenly Reading were facing up to a sixth defeat in eight games with three of the top six to play in the next four games.

Thankfully Brian once again made the right moves on the bench and it was the introduction of Hal Robson-Kanu on 67 minutes that helped spark the recovery. But it was the man on the opposite wing, captain Jobi McAnuff that started the recovery, with a little help from former England keeper David James. James spilled Jay Tabb's cross and McAnuff was there to slam it into the corner. Minutes later and it was suddenly we were level, when HRK's shot was only parried by James into the path of Adam Le Fondre who's second goal for the club made it 2-2. The winner was as esquissite as the first 60 minutes were poor as another sub, Manset back heeled McAnuff's low cross past James in injury time to seal  just a third win of the season for Brian McDermott's team.and secured

The first 70 minutes had to be up there with our worst moments of 2011 but the final 18+4 were crucial in helping to keep the shoots of revival alive and bring much needed confidence to a young team just beginning to come together.

You can check out the highlights here