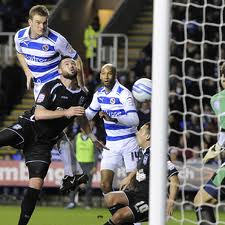 They've always said the mark of any successful side is the ability to pick up points when you aren't at your best and Saturday was a classic example of such a performance as Reading ground out a 1-0 win against a solid Ipswich side.

A few points from the game below the jump, as Reading made it four wins in four.

Going into the game this one had banana skin written all over it. Brilliant wins over West Ham and Leeds had been followed by a demolition of Brighton but Ipswich came into the game in decent form and must have been looking for a bit of revenge after we mugged them in the closing stages at Portman Road just a few weeks before.

In that vein it was Ipswich who started the game the better side and several long range drives just whistled past woodwork or even onto the woodwork as Reading struggled to get any rhythmn. Reading looked a bit sluggish and our lack of a natural left footer at either left back or left midfield was meaning very one dimensional attacks that Ipswich were easily dealing with. Andy Griffin has been part of a side who's kept three clean sheets but he can't have been overly happy with a display more noted for 1 or 2 'hospital' passes as much as solid defending.

On the positive side Jem Karacan and our centre back pairing were once again excellent, with Karacan in particular putting in an energetic and effective performance across the middle that kept Ipswich to those long-range drives, rather than clear-cut opportunities. Reading's best chance came through a Gorkss header, but a final tally of 5 shots from the entire game tells its own story.

The first half in general has to rank up with the worst we've seen at the Madejski this season, with neither side getting their fans going. Credit to the 1500 or so Ipswich fans who made it down and it was good to see another gate of above 18,000. Such attendances may not make THAT much of an impact on the balance sheet but it certainly helps improve the atmosphere and it might just convince the man with the purse strings that the time is right to invest... well we can dream anyway.

Not that this squad needs too much investment anyway. The vast majority of our squad are still improving as players and in players like Tabb, Griffin, Harte, Hunt we know we've players that can cover for most injuries. The only area of concern would be at centre back as there's no obvious replacement if Gorkks or Pearce were sidelined for a long period.

Meanwhile Reading got the goal they needed to seal three points just after the hour when Alex Pearce headed home his third of the season from Jobi McAnuff's free-kick. It was a rare free kick for Reading who like their opponents, were at the mercy of some dreadful officiating from not just the ref but both assistants. Consistency was at a premium and had we not won the game you could have expected a bit more heat on the officials.

From then on in neither side looked threatening but Reading didn't need too, doing what had to be done to secure three more points and give the play-off push another big boost.

A final brief word on Ipswich midfielder Lee Bowyer who did little to endear himself to the East Stand with a serious of gestures late on in the game. As someone that's been playing football at this level and above for 16 years you'd expect him to know better... idiot. You have to wonder if his temperament is one of the reasons he never kicked on from being one of the most promising midfielders in the country during his early days at Charlton and Leeds.

So Reading march on up into fifth and a weekend that saw other teams at the top slip up has given us a real sight of automatic promotion for the first time since Sir Steve was at the club. Certainly today's game against Cardiff will be a real challenge, but if we can get a result there than there's no reason to think we can't challenge either of stuttering Southampton or West Ham.