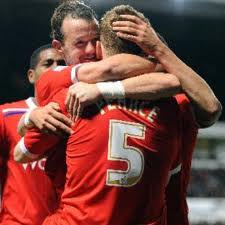 While Saturday's game with Ipswich may not have been that entertaining, the same can't be said for November's game at Portman Road when Reading came back from the dead to shock the home fans and edge themselves closer to play-off contention.

Reading went into the game in 14th with just one win in their last six games and just a point above their hosts two places below them. The Royals started by far the better side and should have been in front going into the break but couldn't take advantage of a ragged looking Ipswich side who were in the midst of a long losing streak that saw fans calling for the head of manager Paul Jewell.

But in typical Reading fashion they were punished for a lack of first half goals by falling behind not just once but twice in the second half as goals from Murphy and Carson gave Ipswich the advantage despite Kaspars Gorkss first goal for Reading on the hour. The game was seeming to drift away from the visitors but in injury time Reading found a way to win, first through Alex Pearce got on the end of Ian Harte's cross and then Noel Hunt who took advantage of a great break from Mikele Leigertwood to give Brian McDermott's team all three points.

Since that day Reading have gone onto establish themselves in the play-off places while Ipswich are still looking over their shoulder at the relegation places. If Reading had failed at Portman Road that day who knows if the situations might not have been reversed. Regardless, two late goals to win an away game when you've had to pay Ipswich's ridiculous ticket prices was just reward for the traveling Royals and it was another great late show to savor.