Share All sharing options for: Top Ten Reading FC Moments Of 2011 - Part 10: Kebe Socks It To The Hammers 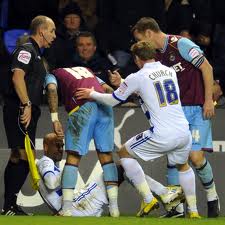 The Scene: Championship game at the Madejski Stadium, December 10

2011 was a great year to be a Royals fan, but the 2011/12 season was still lacking that signature result that made you go into 2012 thinking we could match the previous campaign's highs. But in the middle of December Reading managed to put three past promotion favorites West Ham as Jimmy Kebe stole the show.

A home game with West Ham has brought out the best in the team over the years. From the 6-0 New Years demolition in 2007, the dramatic penalty shoot out win on the night of 9/11 or Dave Kitson twice putting Alan Pardew to the sword. We can add this game to that list after a brilliant second half display earned us all three points and saw only a fraction of the 4,000 traveling Hammers remain in the stadium by the final whistle.

The first half of the game may have been fairly forgettable but in the second half it all came to life. A red card and two quick goals had given Reading the advantage and with West Ham's defenders struggling to pick up Jimmy Kebe on the right hand side the game's most notable moment occurred.

With acres of space Kebe stands with the ball at his feet and then pulls both socks up to the delight of most in the stadium, bar the West Ham players and particularly Jack Collison who smashes into Kebe minutes later and earns himself a red card. Reading went onto score a third and enjoy their biggest win of the season and suddenly put themselves back into play-off contention.

'Sockgate' gathered huge media attention over the next few days but to those in the stadium the whole incident was icing on the cake and a real chance to enjoy watching Reading at home once again. It felt that day that Wembley was really behind us and we might just have even better times just around the corner.