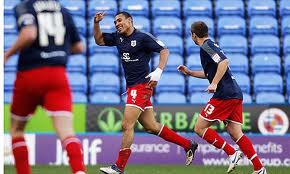 Perhaps we should have all seen this one coming. After two years of giant killings and FA Cup heroics Reading's recent good fortune in the competition came to a grinding halt with a dire and lacklustre display against a Stevenage side chasing a third straight promotion. After the jump we'll sift through the wreckage of a miserable afternoon at the Madejski and ponder what's next in a crucial month for Brian and the team.

It's perhaps an odd thing to say but I was actually a little disappointed with the strength of the lineup named by Brian McDermott. The Reading manager put out his strongest available side and while it's great to see the cup taken so seriously, I would have liked to see Mikkel Andersen and one or two others given a chance to prove themselves while also giving one or two key players a break.

In hindsight not only would such a move have given those fringe players key minutes but the same players might also have had a bit more umph and desire than our regulars, who seemed slow into tackles and reluctant to play Stevenage at their own game. Mikele Leigertwood in particular was awful, with sloppy passing, missed tackles and a lack of energy reminiscent of his early season form where by his own admission he wasn't up to scratch.

It would be harsh to just single out Leigertwood though, as the majority of the 14 players used by the Royals failed to cover themselves in glory, with the possible exception of Adam Federici who kept us in the game with some fine saves. Pearce and Gorkks were OK, though Pearce was cruelly exposed for pace for the Stevenage goal. Cummings and Harte were also below their best. Cummings might just have deserved an 'average' rating but as I mentioned in the half-season report card his crossing was once again underwhelming and it's an area of his game he'll need to work on if he hopes to make it at the top level.

Of the newcomers into the side, Jay Tabb looked busy in his first start for a while before he went off injured, but Hal Robson-Kanu was once again disappointing when given a place in the starting XI. Up front neither Church or Le Fondre looked particularly threatening though neither got much in the way of service. The Beast didn't particularly threaten either, though his strength might have been a better option from the start. There was also a five minute cameo for Academy graduate Lawson D'Ath who didn't do anything wrong in his brief time on the pitch. With Karacan and Tabb both struggling with knocks he could well see a bit more time in the squad in the weeks ahead and another option in the centre of the park would be very welcome.

Sadly the most underwhelming of all has to be the pair of Leigertwood and McAnuff who seemed woefully off the pace and in the case of McAnuff gifted a hungry opposition a goal with some sloppy play inside his own half.

With the score level halfway into the first period McAnuff got the ball on his favored right, only to be quickly closed down by Laird. With the player on his back the skipper tried twice to spin past him only to be blocked. With Federici or the stand wide open for a pass, McAnuff instead tried a third and inevitably fatal turn, whereby the ball was nicked by Laird who laid in Charles to put the visitors ahead and give the 1,200 or so traveling fans plenty to sing about.

Reading did manage a couple of attempts of goal in the second half and Michail Antonio could have staked a real claim to be ahead of Robson-Kanu in the pecking order if he'd taken his chance when through one-on-one. Otherwise Antonio did little to show he deserved a starting berth, though he's certainly worth a few more looks off the bench.

All in all the result was no less than Stevenage, who out-Reading'd Reading deserved. They chased down every ball, gave our players no time to settle and went in full bodied for every header to keep their clean sheet intact and had they taken their chances, could have won by 3 or 4 in the end. For all of the justified talk of how dire Reading were, it's harsh to take the credit away from a decent looking Stevenage side who looked no worse if not better than Championship teams like Doncaster, Watford and Millwall who have all come to the Mad Stad this season.

Credit also to their fans who sang throughout the game and engaged in generally good natured banter with the home fans, though you have to love the irony of a four times normal sized group of away fans singing at half the regular home crowd "you're only here for the 'boro'" who said irony was dead? Still fair play to them and they deserved to enjoy a memorable win on their first trip to the Madejski.

The Reading fans meanwhile were even quieter than usual, a bit of a blow to those fans who argue that freedom of seating would create a bit more atmosphere. Perhaps it was the cold, the less than glamorous opposition or a bit of a subconscious attitude that we should be winning but whatever the case, the home fans just never really got into the game.

It's generally been a rather underwhelming start to the new year for Reading fans who have quickly gone from whispering the possibilities of automatic promotion to bemoaning a squad that's doomed to tumble down the table. As I wrote on HNA yesterday, while I'm pissed off and frustrated at a rather pathetic display, it's also important to remember where we are in the league and how we've got there. Our style of play may not be fabulous and the squad may be a bit thin in terms of true quality, but we've still got the weapons needed to make the top six.

Brian has said he's looking to keep the squad together and add one or two more and that might be all we need to start turning 1 goal wins into 2 goal wins, while giving us fresh impetus to kick on. Even without fresh blood we've still got the talent in our squad to do well, after all it's this same group who have hoisted us up to 5th in the first place while getting results against 6 of the other 9 teams in the top ten of the Championship.

So we now have a full week off for the first time in a month and Brian's got 7 days to work out how to get a result up at Watford, a poor hunting ground for us as of late. It would be great to see Jimmy Kebe back in the starting lineup, though there's also the chance we've seen his last minutes in a Reading shirt. Hopefully Jem Karacan and Noel Hunt will also shake off injuries to give us a full compliment and help get us three points.

So the cup dream is over for another season and at least we don't have the pain of falling one short of Wembley! If you'd like to cheer yourself up and remember happier times, please go over and cast your vote for our moment of 2011, which you can find here