Share All sharing options for: Reading FC's Moment Of 2011 - The Results 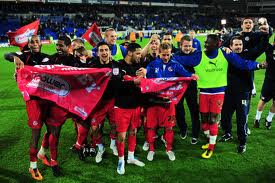 After two weeks of voting you've had your say on what you thought were Reading FC's greatest moment of 2011. Unsurprisingly the 3-0 play-off semi final win at Cardiff came out on top with 41.26% of the vote, well clear of December's 3-0 win over West Ham, which was second with 18.8%. Completing the top three was the play-off final defeat to Swansea which has 12.59% of the vote, just ahead of the 1-0 cup win at Everton with the 4-3 win at Forest rounding out the top five.

If the series proved anything though, it's that 2011 was a pretty great year to be a Reading fan and one that has probably only been surpassed by 2006 in terms of year round great moments. We beat two Premier League sides on the way to an FA Cup Quarter Final, surged into the play-offs, upset the odds to reach Wembley for the first time in 16 years and then dragged ourselves up from 23rd to 5th as the year drew to a close.

Some clubs don't get such drama in a decade and I'm sure I join every Reading fan in thanking the players, management and those in charge at the club for bringing us some unforgettable moments and great drama.

Now that the soppyness is out the way, do you think maybe you could just win a play-off final and make 2012 even better?