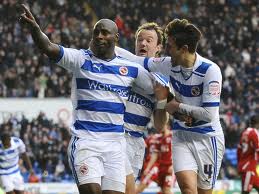 If Reading fans were hoping to see a bold new era on the pitch to match the one off it they were left underwhelmed on Saturday as Reading ground out a 1-0 win over Bristol City. Reading missed two penalties and failed to put away 10 men but thanks to a debut goal from Jason Roberts, they still came away with a vital three points.

Perhaps I'm being a little too harsh and for a team struggling with injuries and trying to introducing new players, this was a great result and hey, we're now up to fourth! So lets look a little closer at events at the Madejski Stadium yesterday shall we.

While the build up to last weekend's game against Hull was one of nerves and worry over the mysterious TSI, this week there was a lot more enthusiasm around the stadium after the Kebe contract extension and the signings of Jason Roberts and Tomasz Cywka. Cywka had to settle for a place on the bench but Roberts came straight into the starting lineup as did Jobi McAnuff and Andy Griffin, with Robson-Kanu out with injury and Simon Church and Ian Harte dropped to the bench.

It was the visitors who started the game looking the better side, keeping the ball in Reading's final third was Federici twice forced into good saves to keep the scores level. After a slow start, Reading slowly gained a foothold in the game, with McAnuff, Hunt and Roberts all looking threatening. Roberts in particular looked impressive and capable of creating chances on his own, giving the attack a dimension that's been lacking since the departure of Shane Long in August. Roberts and Noel Hunt were causing plenty of problems and Michail Antonio had two good chances to open the scoring only to see them blocked. Meanwhile Jay Tabb and Jem Karacan both had shots fall to them perfectly just outside the box neither struck them well enough to trouble former England keeper David James.

Stat of the day, Reading have scored just three times in 16 games in front of the South Stand this season (why did I have to pick Y25 for my season ticket...) and once again they failed to find the back of the net, finishing the first half as second best to a City side who grew in confidence as the game wore on.

Bristol City looked comfortable on the ball, if not a bit blunt up front, and Tabb and Karacan looked overrun at times against a physical five man midfield. Kalifa Cisse put in a good shift on his return to the Madejski, getting a nice reception before the game and when he was subbed towards the end. The former million pound signing showed his limitations though with a number of stray passes.

Just before the first half Hunt went down in the box in what seemed a clear penalty only for it to be denied by the referee. Hunt's tweeted the injury sustained in the challenge if this helps sway your mind at all.... but 0-0 was about the right score at the break.

Into the second half and Reading came out the better team, with Roberts finally having the chance to make the breakthrough just before the hour mark when he was hauled down by Carey inside the box. Carey was given a straight red and while it was a goalscoring chance, it didn't seem a professional foul or the denying of a 'clear' goalscoring opportunity so the City skipper might feel a little hard done by. Roberts himself lined up to take the penalty and saw his kick saved by David James but the rebound fell fortunately to the feet of the Reading striker who scuffed home the rebound, 1-0. Roberts could have had a second soon after but saw his effort on the turn skip just wide of James' far post. It was one of Roberts' last actions of the game as the forward came off to standing ovation on 77 minutes, replaced by Simon Church.

Despite being down to 10 men City continued to cause problems on the break and Adomah came inches away from equalising, only to see his effort slam against the angle. Want-away striker Nicky Maynard came off the bench to the boos of the 1,700 away fans but he couldn't make an impact as Reading's own substitute and debutant Tomasz Cywka gave the home side a great chance to wrap up the win. On for Antonio, Cywka burst into the box on the right but was needlessly hauled down by Pearson for a second penalty of the game. McAnuff stepped up but joined Noel Hunt, Ian Harte and Jason Roberts amongst those to have missed a spot-kick for Reading this season as his effort was well saved by David James.

Fortunately it wouldn't matter as Reading closed out the five minutes of injury time to give them three vital points, an 8th win in 11 games and put them fourth in the Championship.

Before looking at the Reading team a word for Bristol City who for me were one of the most well organised teams to have come to the Madejski this season and if Maynard was still interested in playing for them they could quite easily be a top half side. The only difference between City and Hull last week was that Adomah failed to convert his big chance while Reading took one of theirs, otherwise you couldn't tell one was a top 6 side and the other in the bottom 6.

As for the Royals well forgive the broken record but it was once again a day for 6's and 7's rather than 5's and 8's. Federici made some good early saves early on but had little to do after the first 10, while the back four in front of him all put in a decent shift without really standing out. Andy Griffin did a decent job at left back though having him and McAnuff on the left really limits us as neither are naturally left footed. Karacan and Jay Tabb both played well, with Karacan growing into the game as it wore on, the Turkish U21 stepping up increasingly well in Leigertwood's absence. Michail Antonio didn't have a lot of influence making some decent runs, though there was little in the way of end product while McAnuff started well but faded, unsurprising perhaps given his recent lay-off. Roberts was the stand out performer for Reading, enjoying a great debut, though Noel Hunt was a close second, working hard and getting a few knocks for his troubles as well. Cywka didn't have much time to impress, playing wide on the right for the final eight minutes. The Polish youth international did win a penalty though, which was more than Simon Church managed in his 13 minutes on the pitch.

Churchy really does look lost at the moment and you never get the feeling he's going to cause the opposition any trouble yet alone score a goal. His workrate can't be questioned but as Westie said on this week's Royals Post, you could put any physically fit fan on the pitch and they too would work just as hard. The difference is, is that Church needs to be able to either create chances or put them away and he's done little of either this year. The Welsh international is doing his best to wear out opposition defenders, but he's not the physical threat that Shane Long was last season and he hasn't done a great job of creating chances for himself or others either. The forward still deserves time and support but his chances are fast running out and with Roberts signed and other strikers rumored to be on their way in, you could see Brian letting him go out on loan or maybe even selling the academy graduate if the right offer comes in.

All in all a decent if not stellar performance from Reading who once again did just enough to get the three points they badly needed. As mentioned City were better than their league position suggests, but the team will have to play better than this if they want to get promoted come April.

Focus now shifts once again to the transfer market, with Brian and Nick Hammond having 48 hours to make fresh signings before the window slams shut. A centre back to cover Pearce and Gorkks is almost certain to come in but I wouldn't be shocked to see at least one other come in to give the team a real boost in it's play-off hunt. On the pitch our next match is on Saturday at relegation threatened Doncaster.