Share All sharing options for: View From The Town End - Doncaster Rovers 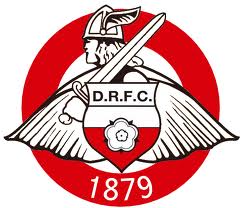 Just over 24 hours to go until the Donny game and with that in mind, Lewis Ward from Doncaster Rovers blog Vikingsbloggen has been kind enough to give us his views on Saturday's clash.

Its been an up and down time so far. We managed to get to September without a win and with only one draw to our name. It seems the defeat to Reading was the last straw when Sean O'Driscoll was replaced by Dean Saunders - a controversial move but we've all learnt to accept the decision. We're not doing too badly at home at the minute, having not lost since November 1st but our away form has been poor of late.

Has the mid-season change in management improved you for the long term?

I'd like to think so! Its hard to say really, who knows where we might have been with O'Driscoll at the wheel but we will never know. We're all taking everything as it comes and we hope everything turns out for the best. With the squad as it is at the moment, I can't see any reason why we won't stay up this year. At the moment the chairman's happy, which means we're happy as he as always done the best thing for Doncaster Rovers.

Donny attracted a fair bit of publicity for it's contraversial 'loaning for the shop window' approach that saw the likes of Diouf arrive. What has been the fan reaction to the policy?

At first, as you'd expect, we were all pretty wary as there was no way we could tell whether the 'experiment' would work. We were all expecting that the squad would be replaced by a load of French players from McKay's books. It started off pretty rapidly with Chimbonda, Ilunga, Diouf, Goulon and Beye all being shipped in, but over time we've come to realise that the new arrivals are adding class to the already present squad. The idea was that the players would be here only for a short time but so far Chimbonda has already extended his stay until June and Diouf has said that he is going nowhere until Rovers have 'made it' showing that they are enjoying their time here.

Donny The Dog, should she have stayed or was it right for her to go?

-Well, Tracy was let go straight after the Daily Sport incident but was given a second chance almost straight away. The idea was to raise money for charity but went ahead without asking the club. Nothing had really been mentioned about it since, until it cropped up again on Sky Sports News today! She has announced her resignation from the position, having found love further away.

I really have faith in us staying up, but I think our 'relegation zone room-mates' won't do so well. My bottom three are therefore Coventry City, Nottingham Forest and Millwall. I don't know why... just have a hunch!

El Hadji Diouf has been playing well recently so could pose a threat. Martin Woods made his return from injury at Hull on Tuesday and made an impact in midfield, so I think he might cause problems too. Also our keeper David Button is not an easy one to beat, as you can see from the Hull statistics.

Anyone Donny don't want to face?

Jimmy Kebe caused us major problems last season but I think we're all worried about Jason Roberts who could pose a big threat to us.

There are only family pubs around the stadium so if you're looking for a bit more atmosphere you'd be best going into town or to the Lakeside Suite on the West Stand. There are roadworks taking place on White Rose Way (which runs from the M18 to the stadium) so there might be delays following the game. Maybe prepare a back up route?