Simon Church - A Right To Boo, Or Being Written Off Too Soon?

Share All sharing options for: Simon Church - A Right To Boo, Or Being Written Off Too Soon? 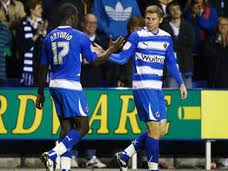 At the time of writing Simon Church is the joint top goalscorer for a team sitting seventh in the Championship and a side who could be within four points of second placed Southampton with a game in hand by the time tonight's games are over. Yet despite being young, a full international, a Reading Academy graduate and our top goalscorer this season, Simon Church continues to divide opinion in the stands and in cyberspace.

The question is, has Church done anything to justify criticism and in the opinion of a small minority, deserving of beeing booed?

Lets take a look at a blind comparison of three strikers and ask yourself to which of them would you be giving stick?

Not much in it really, all three average a goal roughly every 3-4 starts and none of them have an overall ratio of better than a goal every four games.  Two of those players went onto multi-million pound transfers to Premier League clubs while one is getting an increasing amount of stick from Reading fans who think he may not ever make it as this level, yet alone the Premier League.

Now here's the devil with stats, you can bend them anyway you like.

If I added the fact that player A would then score 10 in his next 14, while C would bag seven in his next six it would distort your opinion somewhat and make both A and C seem far better than be B.

Those records belong to three  players around the 22/23 age range playing at Championship level. Player A is Dave Kitson, who found the net just 6 times in his first 24 games with Reading, before going on a major scoring spree and finishing his first full season with 19 goals. Player C is Shane Long, who scored just four in a 29 game stretch between the end of the 2008/09 campaign and the middle of the 2009/10 season.

That leaves player B who you might have guessed is Simon Church.

To me the stats above can show you two things. That it's too early to totally write off the young Welshman but secondly, that it's also a key time for his future development.

So why, if we've already seen such transformations and development from other young strikers, are people prepared to write off Church so soon?

To me he's probably a victim of his own early successes. Before those samples listed, neither Kitson nor Long had started regularly for a Championship side whereas Church already had close to 40 starts and close to 40 more sub appearances in the Championship in the space of just two seasons.  Church had also shown that despite his age,  he was capable of scoring in the Championship, with 14 league goals in the second tier before he'd turned 22. Long had 8 by the same age (although two years were in the Premier League) while Kitson hadn't even featured at that level before.

The fact remains he's been more successful at a younger age than either Kitson or Long and we know how they panned out, a stat that certainly leads you to think we shouldn't quite write off the kid just yet.

But Church has had what neither of those guys really had, training in a top class academy from a young age and being given chances to regularly start as a 20-21 year old. Kitson had all but dropped out of football at one stage before finding his feet at Cambridge in the lower leagues while Long didn't start playing football properly until his mid teens. Church meanwhile has been groomed by a highly respected Academy for years, even being handpicked by Nick Hammond from Wycombe's youth system at 14  (a move which apparently upset another 14 year old by the name of Charlie Austin, who would leave the setup).

So it's fair to say Church has had more chances and better preparation to succeed at this level so does that balance out positive of his early successes?

Some will argue that history doesn't matter, it's the player you are at this moment in time that matters the most to them. If you're not doing your job on the pitch as a 23 year old or 36 year old it doesn't entitle you to any less stick, as the saying goes 'if you're good enough, you're old enough'.  For example you wouldn't let Wayne Rooney have a dodgy season at 23 years old, because he's been playing at the highest level for 5 odd years before that.  In Church's case he's well into this third year at Championship level and it's time he started producing regularl. Just 4 goals in his last 32 league starts just isn't up to the standard you'd expect from a striker playing for a promotion contending side.  But the very fact he's been given 32 starts in a team that's spent the majority of the last 2 years contending for the play-offs also lends weight to the belief he's perhaps got more ability than we think and is doing a good job for the team.

There's also measuring his impact and value based on the intangibles that without detailed Opta/ProZone stats you have to make  based on your memory of games and that gut feeling you get watching a player. Right now I don't think Church offers that much to the team in terms of a attacking threat but he does do a lot of running and always gives 100% commitment. Any fan that questions whether the bloke cares should take a good look at themselves as he busts a gut each and every time he gets onto the pitch. However the argument's been made, notably on the Royals Post podcast, that any fit and athletic player or fan could do a lot of running and that to warrant a regular place in the starting XI of a Championship side, you've got too offer something more than that.

But should we just forget all of the stats and place our trust in the man that decides if Church plays? Brian McDermott has so far not got a lot wrong in his 2+ years at the club and his decisions to put faith in players like Gylfi, Matt Mills, Jimmy Kebe and Shane Long have been rewarded in both results and transfer windfalls.  Brian's also shown he's capable of dropping players, even his favourites if they aren't performing. Jimmy Kebe, Ian Harte, Jem Karacan and Adam Federici have all had to endure spells on the sidelines after poor form or if they've lost their place due to the impressive form of someone else.

But is Church getting games because McDermott has faith in him or because Brian just has no other options?

Before the arrival of Jason Roberts,  I tend to believe it was increasingly due to a lack of options than an unyielding faith. With Long gone the rest of the personal were still set up in a way to get the ball wide and hold the play up in the final third. Church was the most natural fit to fill that 'Long' role, with Robson-Kanu, Le Fondre and Manset all failing to cover themselves in glory, while Hunt has once again been beset by niggling injuries. Throw in Manset's inability to complete 90 minutes and Robson-Kanu's duties as a replacement winger and your only option on a consistent basis has been Church.

The others don't get that much stick though for a mixture of reasons. With Manset you know you've got a bit of an unknown quality, someone who was a flier at best to begin with. Le Fondre has only just made the step up to this level and has the same number of goals while Hunt has been injured and scored 10 just last year so is perhaps getting a bit more slack.

Sadly you have to think that if the Welsh forward can't establish himself in a team without a front line automatic striker, how will he cope with a team suddenly able to retain it's best players while adding others from outside the club?

But does anyone have the right to boo him? I don't really think he's deserved it and I don't think it's going to be that productive in boosting his confidence as Brian McDermott alluded too earlier in the season.  However I understand that if somebody who pays hard earned money wants to let off steam and have their opinion heard inside the stadium then it's their right to do so (as long as it's not offensive or personal).

If the above analysis shows anything it's that the real Simon Church needs to step forward and very quickly if he's to keep the fans on side and prove he's capable of stepping up. I wrote in my mid-season review that the next 6 months could be crucial for the guy and Church himself has also admitted it's a crucial period in his development. The TSI investment has put added pressure on each man in the squad and we can only hope he rises to the challenge, rather than fading away.

But what do you think? is it time to cut our losses and let Churchy go or should we keep the faith?