Reading 1-0 Burnley - Getting The Job Done

Share All sharing options for: Reading 1-0 Burnley - Getting The Job Done 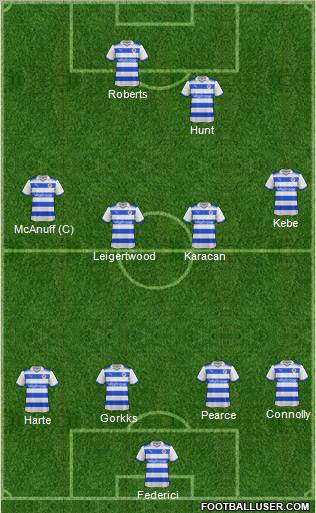 A Jason Roberts goal sent us into our highest position for three years after a hard fought 1-0 win over Burnley at the Madejski Stadium. Both sides missed big chances in one of the more open games we've had at the stadium this year but in the end Roberts third goal in four games sealed a massive massive result for Reading. A result achieved under the watchful guise of our new owner in waiting Anton Zingarevich.

I can't be the only fan that's desperately trying not to get carried away by our form but it's getting harder to ignore the fact we keep getting results even with players out and the team not playing at it's best. We seem to be getting stronger and stronger and with the belief growing in the stands and in the dressing room we've got our best chance of promotion since winning the Championship six years ago.

In saying that, despite our recent great run and winning result last night, our outlook could have been quite different had Charlie Austin's header snuck under the bar in the opening minutes. Burnley had started the game the better side against a Reading team who made one change from the 1-0 win at Derby, with skipper Jobi McAnuff making a surprise early return from a groin injury to replace Hal Robson-Kanu. With the Royals recovering from that early scare they started to get a bit more time in the opposition half and on 11 minutes Jason Roberts put Reading ahead with a clipped shot from just inside the area that looped past Lee Grant and into the net.

Reading settled down from that point and both Jimmy Kebe and McAnuff were in fine form down the wings, causing plenty of trouble for the Burnley defence. As we've come to see so often Reading didn't create that much in the way of shots on goal, just eight in the 90 minutes, but they did have the ball in danger areas often enough to ask questions of the Burnley back four. That being said I thought Reading played a bit more like the away team, happy to pack the middle third of the pitch and nullify Burnley's attempts to play through the middle of the park before bursting away with Kebe and McAnuff. As Chris Hartley wrote earlier this week, without that creative midfielder it's impossible to expect us to have lots of possession and lots of chances but we defended brilliantly and made our chances count. Reading could have been two nil up just before the break but for a dramatic clearence on the line by Ben Mee who used his FACE to stop Noel Hunt's goal bound effort after Harte's free-kick has been saved.

Pearce and Gorkks were magnificent throughout the game, with Pearce deservedly given man of the match by the Sky guys, though Graeme Murty put a strong case for Adam Federici who made a key save minutes after the restart. With Austin through on goal Federici made a massive save with his right hand to keep the score at 1-0 and help Reading weather a storm of early second half pressure that also saw the visitors hit the post. Reading also could have made it two nil but for a header off the line from a Kebe header, but generally it was Burnley who were doing most of the attacking with Reading happy to soak it up and Leigertwood and Karacan also in great form together.

There was a little bit of needle in the game, with Jason Roberts seeming particularly wound up by Ross Wallace, with the two sharing a long exchange after a late tackle. It's been a fair while since we've seen eight yellow cards in one game and both Wallace and Gorkks can consider themselves lucky to have avoided a second yellow after both made late tackles as the game wore on. While it wasn't the best refereeing we've had it was good to see a ref that took the time to make decisions and was happy to trust his assistants.

Also a quick word about Wallace, before the game he accidentally beamed a female Reading fan right in the face during the warm up. To his credit he ran straight over to check on her and stayed and had a chat, nice to see him actually take the time to see she was OK rather than just ignore it all.

Reading just about deserved it for me, and the match reminded me a lot of the Southampton game earlier in the season but this time we showed how we've just stepped it up a gear by being able to keep our composure and see out a lead. That being said I can't say it was a complete performance, as mentioned we got it into good attacking areas but were let down a few times with a bad finish or poor cross but then if we're winning that's all that matters. Four straight clean sheets and eight in our last 11 games is the mark of a team that's more than capable of promotion and with players returning to fitness and form this is the most postive I've been about the team in a long time. There's still a lot to do and we'll need a few bits of luck on the way but right now there are lots of reasons to be excited about being a Reading fan.