Another victory for Reading means that the Royals have now won their last five League matches to nil. Whilst the performances haven’t been thrilling all-out attack from McDermott’s men, one word has been the pivotal descriptor: effective. Federici and company have blocked out the opposition entirely for 474 consecutive minutes, with the forward line grabbing the goals to steal the points. This review is going to be slightly different from usual, with me trying to summarise "Zonal Marking" style just how the Royals came away with victory at the Riverside. 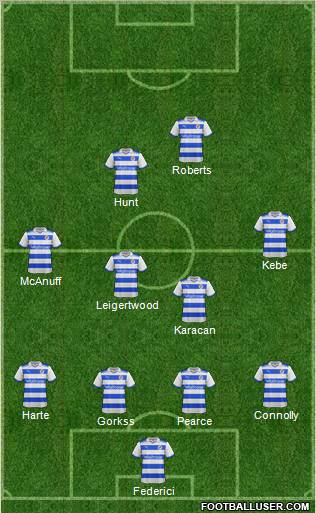 Reading’s system is very firmly based around the classic 4-4-2. However, McDermott’s side have a very rigid structure which teams find very difficult to break down. Often the midfielders and defenders sit in their banks of four inside Reading’s own defensive third, leaving very little space for strikers and midfielders to find gaps between the lines. Karacan hustles and tracks the man in possession, constantly harrying him into making either a difficult pass forwards or a sideways ball to try and unlock the defence there instead. Reading’s first goal came via Karacan intercepting a ball upfield and playing to Jimmy Kebe, who won the corner Hunt scored from – more on that later. But with no way through, Middlesbrough were reduced to long shots from Arca and Jutkiewicz which barely troubled Adam Federici. The one time Boro got in behind the Royals defence, Robson could only fire tamely at the ‘keeper. Needless to say, with the amount of clear-cut chances Reading allow an opponent on goal, this was a gilt-edged opportunity, and one which needed to be taken.

The set-piece practice Reading put in cannot be underestimated. Before this match, 10 of Reading’s 39 League goals had come from free-kicks or corners, whether directly headed in or assisting a team-mate. Harte’s delivery for 1-0 was a deep cross looking for a defender at the back post. Against Coventry it was Matthew Connolly heading across for Jason Roberts to bundle home. This time it was Alex Pearce who delivered to Noel Hunt on the edge of the 6 yard box, just beating Steele to the ball to see it go in off both post and bar. Another set-piece goal, which will be important for Reading if they continue to struggle from open play. 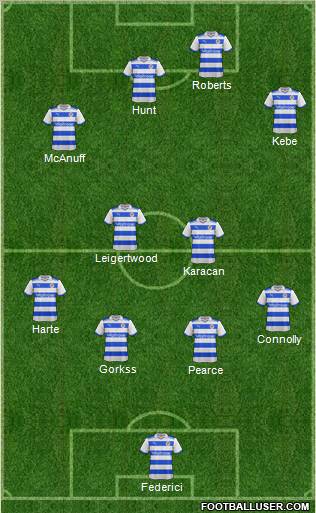 The Royals’ system is also reliant on the counter-attacking ability of Jobi McAnuff and Jimmy Kebe on either wing. McAnuff and Kebe are two of the best players in the Championship when running at opponents. And as the game wore on, Middlesbrough threw more and more men forward in an attempt to break down the resolute Royals defence. But the speed on the counter-attack meant Reading had the more meaningful chances of the second 45. Roberts outmuscled his marker and found himself one-on-one with Steele but the Boro keeper saved his effort. For Reading’s 2nd killer goal, Leigertwood picked the ball up in midfield with free space ahead, as Middlesbrough had committed their full-backs up the field. He released a through-ball to Roberts, who was cynically tripped by Hines as he bore down on goal. Ian Harte stepped up from 25 yards to curl an absolute beauty into the top corner, rightly earning him a place in the nPower Championship Team of the Week. And McAnuff, always wanting to drift inside onto his preferred right foot, had a late penalty shout turned down as he and Roberts combined in the penalty area. But the job was done and three points were once again heading to Reading.

A cocktail of rigidity, speed and set-piece specialty has seen the Royals record five straight wins in the league – on current form, however you look at it, McDermott’s men are the team to beat.