Share All sharing options for: Millwall 1-2 Reading - Royals Roar Past The Lions 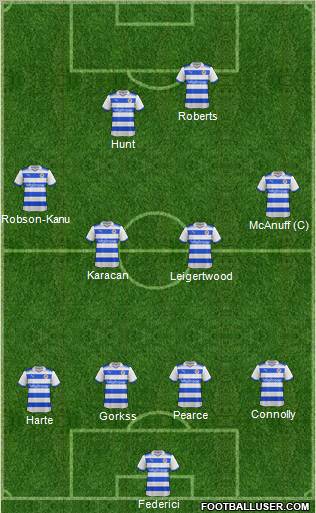 Reading made it six wins in a row in front of nearly 1,500 delirious travelling Royals as Adam Le Fondre's second half goal ensured a great day out in the spring sunshine in South East London.

Despite looking ineffective and anything but Premier League quality for large periods of this game, the result ensures that our promotion push continues to gain momentum and with a set of very winnable games coming up, both West Ham and Southampton will be nervously looking over their shoulders.

Reading went into Saturday's game forced into one change, with Hal Robson-Kanu coming in for Jimmy Kebe, who missed the game with an injury picked up in training. Millwall meanwhile had former Royal James Henry in their starting lineup (and on the front cover of the program) but there was no place for another former Reading man Darius Henderson. 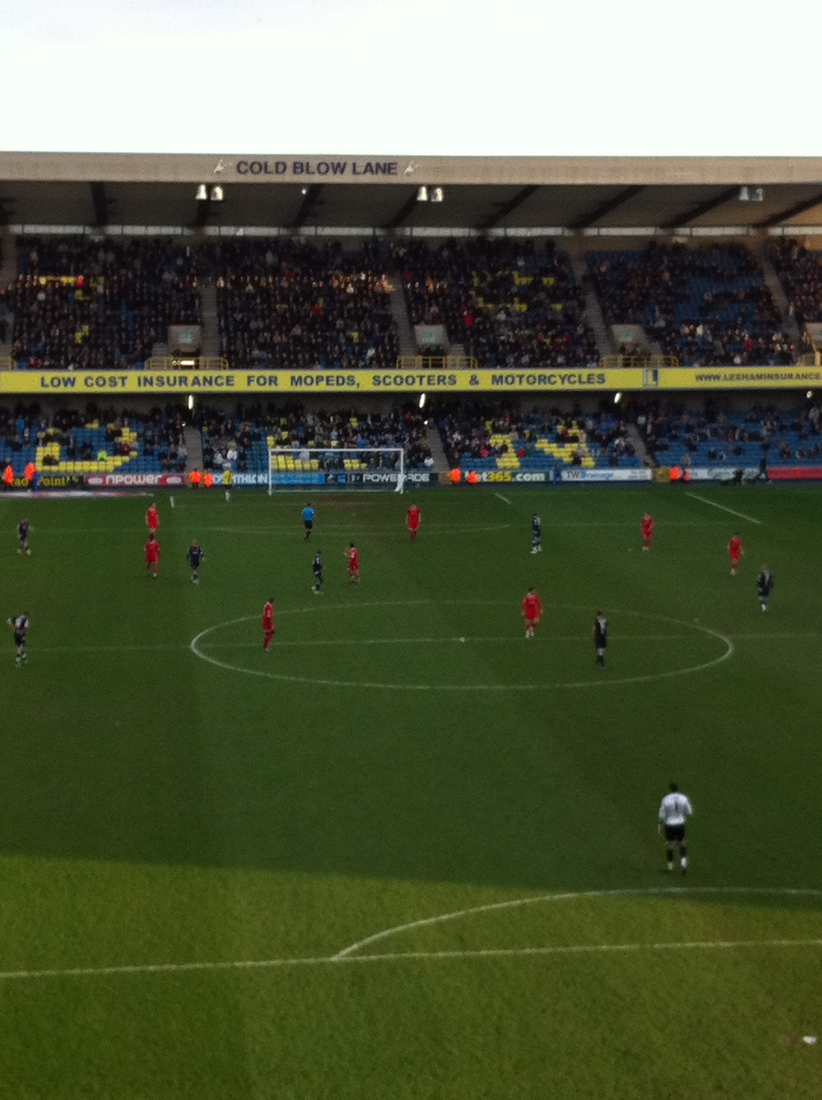 As fellow TTE writer Jonny explained in his Boro analysis last week, Reading were once again happy to get bodies behind the ball and let Millwall have long periods of possession while trying to break either through flick ons from Hunt or get it wide to McAnuff or Robson-Kanu. While we've got results with this plan I'd be lying to say it's fun to watch and yesterday it yielded barely an effort on goal in a first half that Milwall had the better of. Henry had 2 or 3 potshots wide, Bouzza hit the post and the hosts also became the first team in six games to breach our backline with Andy Keogh slotting past Federici after a quarter of an hour to make it 1-0. The usually rock solid Kaspars Gorkss has to take some share of the blame for the goal as it was his half clearance that gave the ball away to Harry Kane who put Keogh through. Federici hesitated slightly and that gave Keogh all the time he needed to neatly place the ball in the back of the net.

Reading didn't look well placed to get level, as mentioned the Lions had the ball in and around the box numerous times as Brian McDermott's side looked rattled by Millwall's direct style. Perhaps it shouldn't have been too much of a shock seeing as Millwall were seconds away from a convincing win at the Madejski in August, but even so I had to agree with the guy behind me said we looked more like a side third from bottom than in third in the league.

Up until first half injury time, our best and only real chance of the first half came when Ian Harte's free-kick whistled over the bar but that all changed on the stroke of half time when Robson-Kanu volleyed home a half cleared corner to bring us level. It really was a sweetly struck effort and you could see the home crowd and Millwall players visibly drop their heads trudging down the tunnel.

At half-time Jay Tabb replaced Connolly who had struggled on through the first period after spending a couple of minutes down injured. Jem Karacan moved to right back and his dynamism helped spark the team as did Tabby himself who had one of his best 45 minutes in a Reading shirt. It wasn't quite the Jamie Redknapp Euro 96 type of cameo, but it helped energise the team who began to play more like their regular selves, winning second balls and closing down Millwall at every opportunity. The Lions looked like a team just waiting to concede a goal and were making sloppy passes to the extent they failed to even play the ball back to Federici from an uncontested drop ball, instead slicing it into the stands for a Reading throw.

If Tabb was one catalyst then Adam Le Fondre's introduction was the match to light the fire as the former Rotherham striker looked full of life and grabbed the winning goal with 14 minutes to go. With the ball floated over the top towards the right hand side Le Fondre stopped running as soon as he realised he was offside. Expecting the flag to be raised or the keeper to come out, the two Millwall centre backs hesitated for a moment, allowing Jason Roberts to come from an onside position, beat the fullback and get the ball on the corner of the penalty area. With Le Fondre now onside Roberts calmly slotted the ball across the box into the path of Alfie who finished the move off and gave us a lead we never looked likely to lose. Some might argue that Le Fondre was active if only by distracting the centre backs, something that was mentioned in the wake of Hull's winner at the Mad Stad in Jauary but this wasn't anywhere near as distracting and there was so so much to do few Millwall players or fans could complain too much.

As mentioned Millwall never looked like scoring and Reading pushed on looking for a third goal. Karacan made one awesome run the length of the pitch down the right hand side and was unlucky not to get at least an assist for his efforts.

Performance wise this won't go down as one of our best of the season but credit to Karacan who played well both in the middle and at right back, while Jason Roberts worked tirelessly throughout and our winner was almost 100% down to Roberts own work rate of chasing down a ball despite knowing the flag could have gone up. As mentioned both of our substitutes had decent games while the centre back pairing, bar the goal and one other misplaced pass from Pearce, were excellent and dealt with every long ball thrown at them. Leigertwood, McAnuff and Hunt were all quite quiet and McAnuff in particular might wonder how this game passed him by. Hunt will be looking over his shoulder after Le Fondre's impact though given he'd scored twice in his last two away games I don't see Brian making a chance to the starting lineup for Pompy on Tuesday. If I was going to give a man of the match, I'd probably just give the nod to Roberts, with Karacan a close second.

Hal Robson-Kanu scored one of the goals of the season and mixed up the brilliant with the appalling throughout the 90 minutes. It's a trait of young players that you never quite get used too but you have to excuse the odd poor cross or woefull pass to let them develop to the stage where it's more of the fantastic finishing we saw on Saturday. In saying that, we did miss Kebe and with the greatest of respects to Robson-Kanu I imagine Jimmy will be straight back into the side when fit.

Millwall worked hard in the first half but lacked any real quality to make their efforts pay dividends. James Henry got plenty of stick from the travelling fans and he showed why he was surplus to requirements at the Madejski with a petulant attitude and a lack of end product. There were less than 10,000 home fans in the ground and you can see why they are staying away with the home team lacking any kind of consistency and I have to say, lack of desire once the equaliser went in.

While the home fans were lacking in numbers, Reading brought their second highest following of the season and there was a cracking atmosphere before during and after the game as the songs of Reading fans rang out through London Bridge station after 5 o'clock. Brian and several of the players mentioned the impact the fans backing has on the players and hopefully we'll see plenty of fans turn up home and away for the run in.

But despite Millwall's failings or one or two lacklustre performances from Reading's players, I don't want to take any credit away from Brian and the team in general, who once again got the result they needed at a venue where winning is never easy. Even the 2005/2006 team had the odd off day but the key thing was they just kept winning and winning breeds confidence. The only negative on the whole weekend has been the wins for both Southampton and West Ham, meaning that our destiny is still out of our own hands.

Portsmouth are the next visitors to the Madejski on Tuesday, or at least they're scheduled to be anyway. The South Coast club's financial plight means that they might well not exist by Tuesday and even if they do, they might go bust before the end of the season, making the result null and void. Still, that's out of our control and the only thing we can do is go out there and win.