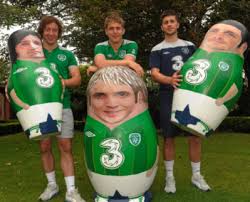 17th March is a day that many use as an excuse to put on a green wig, get bladdered on Guinness and enjoy the craic. I say, rather than pretending we’re Tony Cascarino and that we’ve got an Irish grandmother, lets instead salute some of the best players that the Emerald Isle has given us (and Alan Maybury).

As usual this is my team so whilst there are probably some glaring omissions you can hold me to account in the comments section. Also, I’ve decided to adopt rugby union’s approach and I will be selecting players from both the Republic and Northern Ireland. No doubt this will offend some but probably fewer than had I been forced to include Joe Gamble and Patrick O’Kelly.

Initially I was going to exclude loanees from this team, that was until I remembered one of our best ever loan players. In recent years Reading fans have been treated to some truly excellent, reliable goalkeepers but things were very different in the mid-90s. After Shaka Hislop left for Newcastle the club had a succession of goalkeepers who failed to make the number 1 shirt their own either through injury (Nicky Hammond, Steve Mautone), being very bad (Sal Bibbo, Simon Sheppard), being an outfield player (Andy Bernal, Ady Williams, Jimmy Quinn) or being more than a little bonkers (Bobby Mihaylov). In amongst all the chaos however were 17 games of relative serenity in 1996. It was then that Tommy Wright arrived on loan from Nottingham Forest as part of his recuperation from injury and his brief time at the club saw him keep 7 clean sheets and only conceding 16 in what was a truly terrible side. Even now I can still hear the South Bank chanting “Tommy Wright, Wright, Wright!” He eventually moved on to Manchester City and in total played 31 times for Northern Ireland. 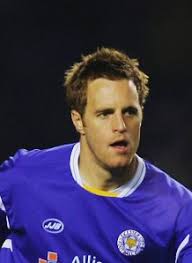 Yeah ok, after saying no loanees I’ve started with two and it’s not even like I can say this one was all that great. My problem is, can anyone think of a better Irish right back? I was tempted to put in Jay Tabb but I think it’s stretching it, even for me, to include an uncapped, Tooting born midfielder! Instead the man that came in for 8 games back in 1999 on loan from Leeds United (where incidentally he played with Ian Harte) with fairly unspectacular results gets the nod. On the plus side he is a proper Irishman being Dublin born, with 10 caps he's a full international and he played at right back for Reading. So he’s in by default but I won’t argue any alternatives. 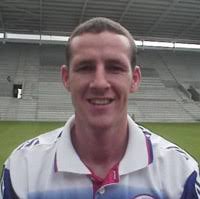 Third player in and finally a ‘proper’ Reading player and in the form of a former captain no less. Barry Hunter cost the not insubstantial fee of £400k when he joined from Wrexham in 1998. The lanky centre back had an injury plagued time at the club but still managed to notch up 84 appearances over 5 years. He dropped out of favour under Tommy Burns and later left for Rushden and Diamonds in 2001. During his time at the club he picked up 14 caps for Northern Ireland and after brief spells managing Rushden & Diamonds and coaching at Swindon, he is now a freelance scout.

No not the playwright but the ‘other’ signing from Cork City. Rumour has it that Reading shelled out £250k for Bennett, partly as compensation for swiping Long and Doyle so cheaply. Whilst he never made a first team appearance for the club he had some successful seasons on loan at Southampton and Brentford, eventually signing for the latter and being made club captain at Griffin Park. Still, it may come as a bit of a surprise that he’s collected 2 caps for the Republic. Both came on what was effectively a ‘B’ team tour of the USA in which he played in games against Ecuador and Bolivia. He is currently playing for Cheltenham Town in League Two.

What a revelation the signing of Ian Harte has been. Nobody really thought much of Brian McDermott’s decision to bring an aging left back in from Carlisle in 2010 but Brian knew his man. Harte isn’t quite as old as was first thought and has proved to be a very astute signing. Even putting aside his astonishing prowess from dead balls he has been much more solid defensively than many thought. It’s all been a bit of a renaissance for him really after spending several years in the wilderness after injuries blighted his time in Spain and he struggled for several years to get club in England. Walks into this team and is comfortably up with the best left backs we’ve had. 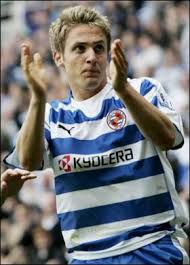 Can’t see many people doubting the inclusion of Super Kevin Doyle but maybe slightly controversially I’ve gone for him on the right wing. The reason is fairly simple, I want to be consistent and play 4-4-2 and no way am I dropping my first choice strikers. Besides, Doyler’s played on the right wing (admittedly with mixed results) for his current club Wolves so I’m sure he can do a job for me. There’s an argument that he’s Reading’s best ever signing having arrived from Cork City for £80k and leaving four years later for £6.5m after 155 games and 55 goals. He’ll always remain a real favourite with Reading fans, not least for hanging around following relegation and his whole hearted performances. 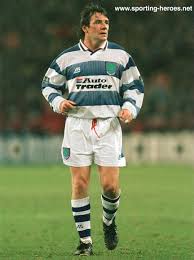 I may as well throw it out there, I don’t think Ray Houghton was that bad for the club. In his defence he was in an awful side and at 35 he was hardly in the prime of what was a pretty good career. He’s still regarded with great fondness at Liverpool for his all action performances and played a significant role in their 1988 Championship winning side. His finest moment however came at the World Cup in 1994 where his stunning goal gave Ireland a famous win against eventual finalists Italy. Despite being born in Glasgow, that goal, a European Championship and 2 World Cups, plus 73 caps all mean that he’s more than qualified to be in this side. In recent years he’s done a lot of work as a pundit for television, worked as an ambassador for the FAI and perhaps slightly oddly worked as a consultant for Football Manager.

Unfortunately for Jimmy Crawford he will always be regarded as a bit of a disaster for Reading. He should at least take solace in the fact that he was nowhere near the worst of Tommy Burns’ signings. The Chicago born midfielder had played at Newcastle when Burns was part of the coaching set up and came to Berkshire along with six others as part of the ‘Magnificent Seven’ deadline day signings of March 1998. He always struggled to hold down a place in the team due in part to a succession of injuries and also to the ridiculous size of the playing squad. He never really seemed to find a role at the club and in 2000 when Alan Pardew took over he was sold to Irish side Shelbourne where he enjoyed considerable more success winning four League of Ireland titles. He was capped 3 times for the Irish under-21s when he was at Newcastle and also had a brief spell in charge of Shamrock Rovers in 2008 where he was succeeded by another ex-Reading player, current Northern Ireland manager Michael O’Neill. 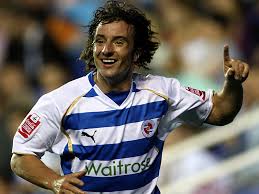 Now here’s a man that always divided opinion at Reading. One fan behind me began singing “that’s why we’re going down” as Hunt collected the player of the season award as we fell foul of the ‘second season syndrome’. What was never in doubt is the Portlaoise lad’s work rate and effort when he was at his best for the club. He went from being a super sub behind Bobby Convey in 2004/05 to an integral part of the side that stunned the Premier League. Regardless of whatever he achieved at the club though, he will probably be best remembered for his clash with Peter Cech that has left the goalkeeper needing a head protector. He left Reading under a little bit of a cloud after he allegedly fell out with Steve Coppell prior to the playoff tie against Burnley but has done well since at Wolves, famously scoring a stunning goal on the final day of the season against Spurs to save his side from relegation.

Ask Reading fans of a certain age (ie my age) what their first memories are of watching Reading, the chances are that it’ll be Jimmy Quinn scoring goals. Prior to the glory days under Steve Coppell the club’s best days were arguably 1993-1995. With Mark McGhee at the helm the side played some great football and leading the charge was a 34 year old Ulsterman. It really shouldn’t have worked but boy did it. Reading romped to the Second Division title (now League One) with Quinn finishing top goalscorer out of the entire Football League with 34 goals. The following year the club continued the success with a run to the playoff final after finishing second in the old First Division. What guarantees Quinn’s place in Reading’s history was how he and Mick Gooding picked up the reins after McGhee’s acrimonious departure to Leicester midway through the season, leading the club to Wembley. Unbelievably Quinn is still registered as a player at the age of 51 with Nantwich Town where he is also manager. Earlier this season he was named as a substitute as his side took on MK Dons in the FA cup, had he come on he would have become the oldest player ever to feature in the full round of the competition. 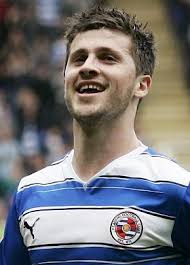 If Shane Long was a movie, he’d definitely be a sleeper hit that flops big time at the box office but becomes massive on DVD. It seems strange to think it now but it took a long time (no pun intended) for Reading fans to take to the lad from Tipperary. Many doubted his abilities to replace compatriot Kevin Doyle but he really repaid the faith shown in him, principally by Brian McDermott. He’d shown flashes of what he can do but under McDermott he revelled in being the main man. Aided by his background as a hurler back in his native Ireland (he’s still the only man to represent Ireland in two different sports at Croke Park) he learned to use his strength and became arguably the most complete forward to play for the club. Pacy, strong, intelligent and the ability to score a variety of goals, Long hopefully still has a great career ahead of him. 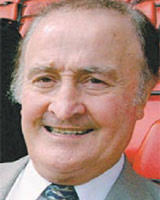 Reading have had a few different Irish managers; Jimmy Quinn’s already been mentioned, Brendan Rodgers never really worked, current incumbent Brian McDermott has Irish roots and even current Northern Ireland manager Michael O’Neill is a former Reading loanee. However, for me only one man gets to manage this team. He may be a Sunderland legend but as the man responsible for taking a punt of Reading’s greatest ever players, Charlie Hurley is the man. Four clubs had already decided that Robin Friday wasn’t worth the gamble but the straight talking Irishman brought him to the club and the rest as they say is history. Looking at that team I think it’s actually not the worst in the world! With Harte, Long, Quinn and Doyle in the side you can guarantee that there’s plenty of goals. Houghton and Hunt means that the work rate will be through the roof. The defence might be a little bit suspect but I have faith in Tommy Wright. Besides I’ll be able to choose from Graham Stack, Noel Hunt, Scott Davies and Steve Morrow from the subs bench so I say, bring on team GB!