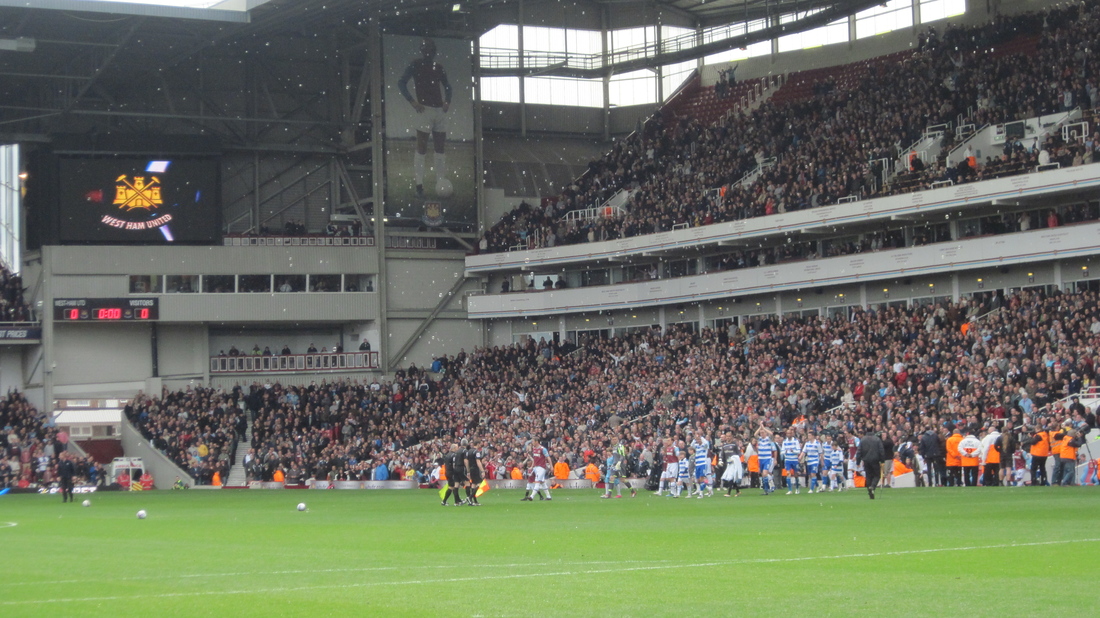 Amazing - No other word really does it justice as far as Reading fans are concerned because yesterday has to be up there with any of the best days we've had following this football club. To go to West Ham and put four past a team who have been in the top 3 all season and who have had just 1 defeat in 2012 was stunning to say the least and it will have left a lasting impression on each of the 3,000 strong Reading contingent in the Sir Trevor Brooking Lower.

It's fair to say that this game had seemed a very long time coming. From the moment Reading stormed into the automatic promotion picture, the match had loomed on the horizon bringing with it a mix of fear,excitement and anticipation not felt since that fateful day last May. Like that day in May there was a 4-2 scoreline but this time it was Reading fans leaving London with smiles on their faces, so join me if you will for a lovely trip back in time to Saturday March 31st where Reading put at least their little toe into the Premier League. 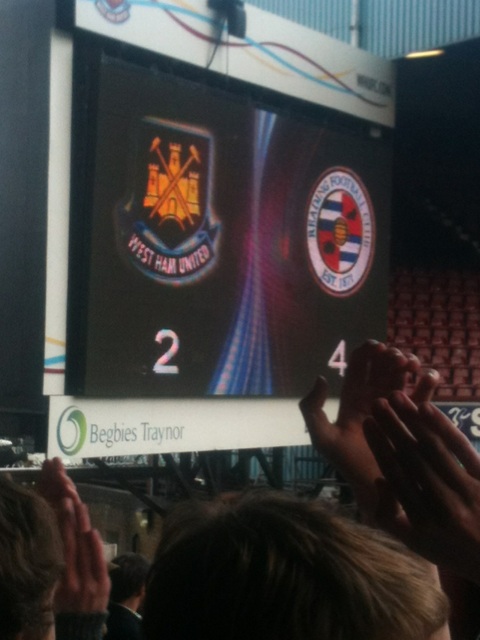 The day started off in the best possible way when it was announced that Jason Roberts was fit to start after missing the Blackpool game with a hamstring injury. The former Wigan striker came straight into an otherwise unchanged starting eleven at the expense of Benik Afobe who dropped to the bench with Adam Le Fondre left out of the 16. There was also a return to the bench for the recalled Alex McCarthy with Mikkel Andersen missing through injury.

For the opposition, all bar one of West Ham's matchday 16 had Premier League experience, assembled at a cost of roughly £20 million, some 6 million of that spent this season alone (For comparison, Reading's 16 had 5 with top flight experience and was built for around £5 million, £1.5 of it spent this year).

For the first 40 minutes it looked as if that Premier League experience and touch of individual quality was going to undo the Royals, who looked ragged across the middle and lacking that touch of quality in the areas that mattered the most. It took the home side just eight minutes to send some 30,000 Irons fans crazy, when Kevin Nolan's header was well saved by Federici only to fall into the path of Carlton Cole who drove home to give his side the lead.

It was a great move by the Hammers who continued to control the play through most of the half. West Ham were constantly stretching the play, moving from right to left with ease, with McCartney particularly effective from left back and at times you worried if we might totally cave under the pressure. Kebe and McAnuff struggled to make an impact while Noel Hunt's touch totally deserted him in the first 15-20 minutes as we struggled to hold onto the ball.

Even though they were second best to their hosts, Reading did have a couple of chances, with Noel Hunt's shot seemingly destined for the net only to be cleared off the line by Tomkins, while we were awarded a couple of free-kicks in promising positions that were wasted by poor deliveries by Ian Harte.

It looked as if Harte might have to be substituted after he pulled up late in the half, but with Jay Tabb warming up on the sideline and just a minute to go before half-time, the former Republic of Ireland left back curled in a perfect corner towards the near post that was met by Gorkss who nodded past Green and sent the Reading fans absolutely crazy.

Just like at Millwall a month ago, a goal out of nowhere just before the break had turned the game on its head and just seconds later it got even better. A long kick from Federici found Roberts and after the ball had pinged between him and Tomkins it squirted out to Hunt who slotted past Green to bring utter madness to the away end. West Ham then nearly leveled with seconds left of stoppage time but the ball somehow stayed out of the net from a goalmouth scramble and Reading went into the break 2-1 to the good.

I'd be lying to say we deserved it but my word was it satisfying to be able to sit down and enjoy the brief spell of sunshine during half time knowing that West Ham would have to score twice to deny us at least a point. 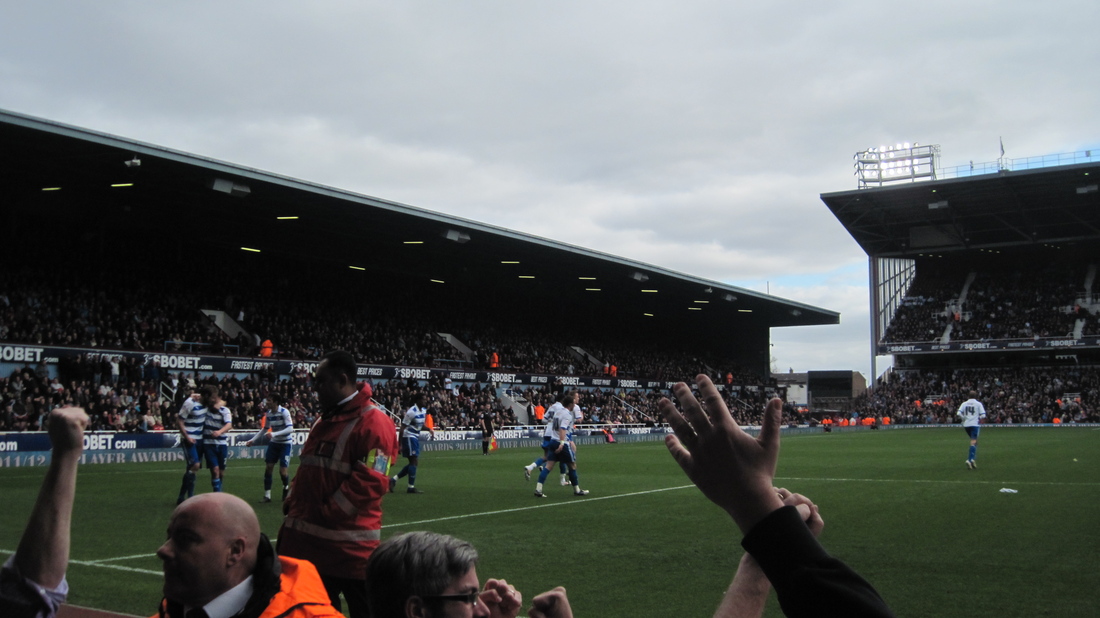 Reading suffered a blow 10 minutes after the restart when Karacan went down with a bang to the face and after briefly trying to stay on had to be replaced by Tabb. But what nerves remained evaporated 15 minutes after the restart when Ian Harte scored a penalty after Hunt was brought down. It wasn't the worst foul in the world but there was contact and even if it hadn't have been given, Kebe had smashed the ball into the top corner anyway, something that would have been even more satisfying after the abuse Kebe was getting.

The next 20 minutes were perfect, with Reading easily keeping the Hammers quiet on the pitch and the traveling fans keeping West Ham fans quiet off of it. The only bad bit was seeing Tabb have to go off with a rib injury, but McAnuff did well in the middle and Robson-Kanu did his part on the left.

With the game seemingly wrapped up, the nerve factor was ramped up when Vaz Te leaped high over Gorkss to nod home a corner, much to the delight of West Ham captain Kevin Nolan, who as you'll see below wasted no time winding up the fans behind the goal. What a loathsome little **** he is whenever he takes the pitch against the Royals. 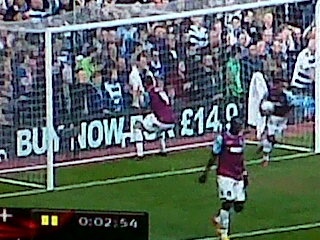 But as Alan Partridge might remark, "needless to say we had the last laugh" as Noel Hunt and Mikele Leigertwood combined to score the fourth and send all three points heading back down the M4. For a moment it looked as if the icing had been put on the cake with a fifth but sadly for that cliche and the away fans it was ruled out. Never mind, we'll just have to score five at St Mary's a week on Friday.

Performance wise and this was a day for 9's and 10's all round with Jason Roberts deserving particular mention for an inspirational performance up front. Considering that he was up against Faye, played most of the game on a yellow AND had just come back from injury it was a remarkable performance and if we go up it'll be in no small part down to the former Rovers striker. Other stand out performers were Gorkss, Pearce, Cummings and Leigertwood but really every single man deserves a bottle of champers for that one. 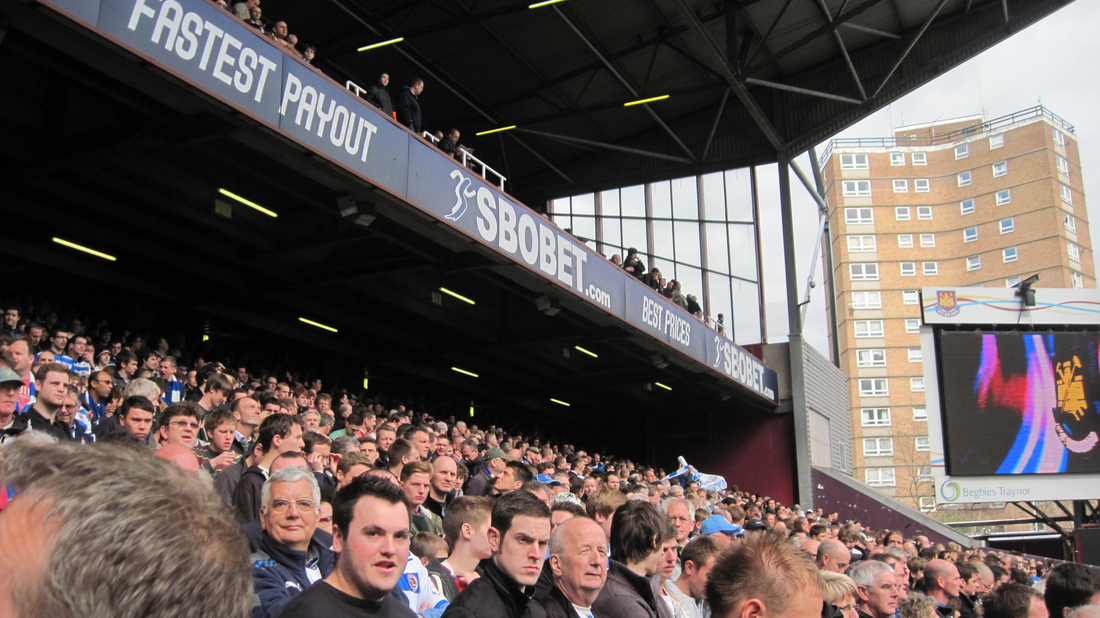 As for West Ham and it's clear that they have some talented individuals for this level but there just seems to be no plan and no team spirit. When they were 1-0 up it all seemed so easy but the lack of fight in the second period was shocking. It reminded me a lot of some of Reading's displays in the last 3/4 months of the Coppell era and you can see West Ham ending up in a similar situation to Reading, bombing into and out of the play-offs. I will say that I didn't notice a lot of 'hoofball' from out hosts and Big Sam is probably right to be a little annoyed at that tag being handed out so easily.

Quick word on the refereeing and generally it was pretty poor for both teams. The lino on the left as we looked at the pitch was particularly dire, and god knows why Roberts was the only booking for a foul up to the dying seconds of the game. Kebe was kicked time and time again but credit to Jimmy for rising above that and the torrent of abuse he got from the stands.

I'd say it's important not to get carried away, but we know that Brian is the ideal man to keep the squad grounded and motivated and we've still got 6 very tough games to go. Southampton's slip up last night has given us a chance to take the title and 6 wins from 6 will see us win the league.

But let's not look to far into the future as today is a day to just sit back, read through the below links and just bask in the glow of an amazing weekend to be a Reading fan.